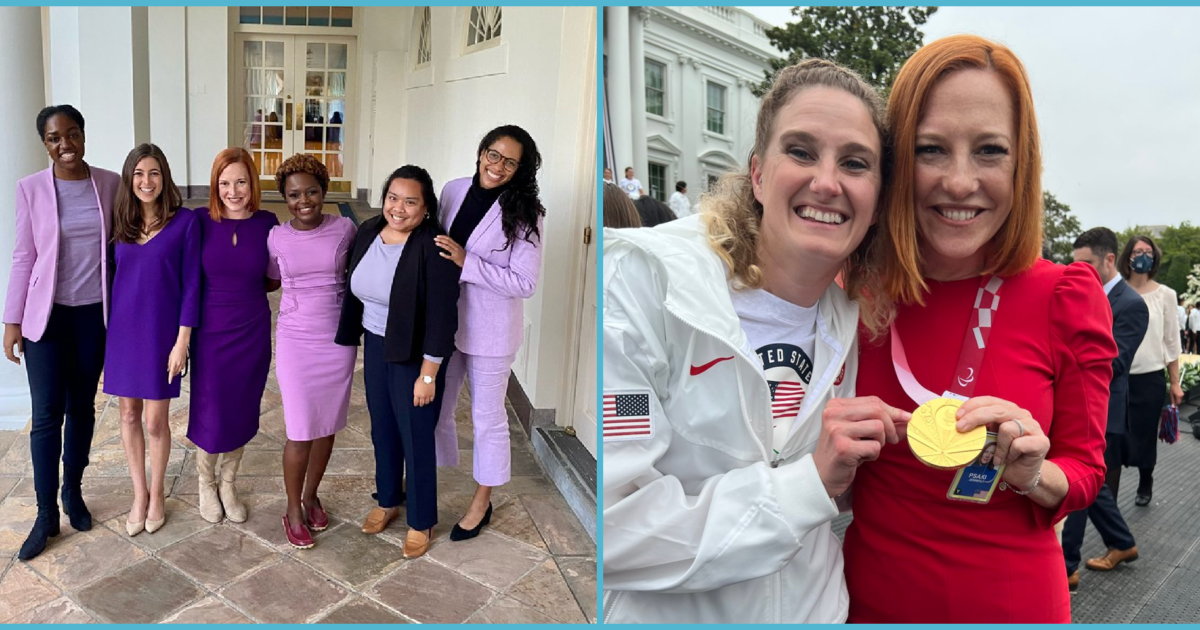 Jen Psaki has conquered the most powerful podium in politics. As the White House Press Secretary, her job is to, well, I’ll let her tell it: “My job is to provide as much information as I can possibly provide, and provide insight into the President’s thinking,” she’s said. Her straightforward and sometimes blistering genre of answers to reporters’ questions got a name in January 2021: the #PsakiBomb.

Psaki got her start in politics as an intern for a Democratic fundraiser, where her first order of political business was picking out hors d’oeuvres for her boss’s engagement party. Then, when Psaki was a volunteer for the Arlington Democratic Party, an older colleague suggested that she join a campaign to gain more relevant experience. “So I did what a lot of 23-year-olds do,” she told an interviewer. “I broke up with my boyfriend and drove to Iowa to work for the Democratic Party.” She didn’t have health insurance and was paid around $1,500 a month (this was 2002). “I door-knocked. I planned protests. I did whatever they asked me to,” she said. That up-for-whatever attitude eventually got her to the State Department, where she worked with former Secretary of State John Kerry. She famously interviewed for the White House Press Secretary role twice before landing the job under the Biden Administration. And in early May 2022, she announced that, at 43 years old, she’s moving away from politics (for now) to host a show on MSNBC.

Psaki has spent countless hours speaking on behalf of government officials. But she talks less often about herself. Here, we unpacked what she has said about her career and her advice for anyone out there who wants to feel more seen at work. (And don’t we all?)

1. “I am used to being doubted and being underestimated. And I find that to be a place to thrive.” —Jen Psaki, Matt Lewis & The News

2. “There are times where you have to be on the journey and recognize that sometimes you don’t know what the end is going to be, right? Maybe it’s going to be great. And maybe it’s not.” —Psaki, Vogue

4. “When I’m hiring, I’m always looking for people who have the best attitude and will happily make 400 copies and do it with a smile and ask to do more. Oftentimes that’s the differentiator between people.” —Psaki, Matt Lewis & The News

6. “I will note I’m a human being. I’m an Irish person who, not to stereotype myself, but I have times where I get a little hot. I try not to, but there are days where I wish I would’ve been calmer, or more gracious, in my responses when you have a moment of human frustration. But I will tell you that how I try to approach it is trying to use it as a forum for providing information to the public. And trying to treat people, on my best days, with respect.” —Psaki, Politico’s Women Rule

7. “I think the worst thing people say to me is, ‘Oh, you’re such a nice person.’ Anyone who’s nice is more than that.” —Psaki, Matt Lewis & The News

8. “The kinds of people you meet on political campaigns are some of the best human beings. They’re survivors, and they’re spunky, and they have personalities, and they spend months sleeping on couches and living on, whatever, pizza and coffee and bad beer.” —Psaki, Vogue

9. “My armor has always been to do the homework and to be as prepared as you can possibly be. And to ask questions.” —Psaki, Matt Lewis & The News

Devin is the Director of Editorial and Brand at The Muse. Previously she’s held top editor roles at Morning Brew, Prevention.com, and GoodHousekeeping.com. She’s also written for The Cut and Cosmopolitan, among other outlets. Her work has been nominated for numerous awards, and she’s completed fiction workshops with authors Glen David Gold (2015) and Danielle Lazarin (2018).