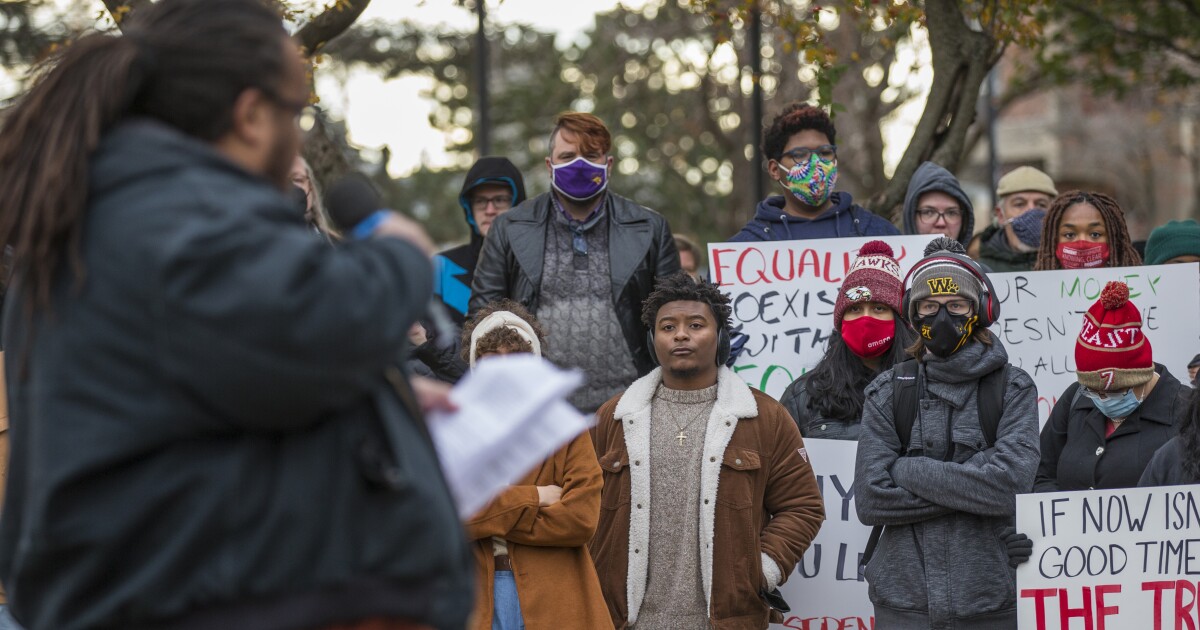 The resignation of two trustees in recent weeks has roiled a small Iowa college where students and alumni are raising questions about how much its leaders value diversity, equity, and inclusion.

Protests started at Coe College after the resignation of Robert Darryl Banks, an alumnus who served on Coe’s Board of Trustees for more than 40 years. He stepped down following a recent presidential search.

During a board meeting on October 1, a fellow trustee called Banks a “bald-faced liar” after Banks, who is Black, brought up diversity-and-inclusion concerns from people of color who were members of the presidential-search committee, he told The Chronicle. That, and what Banks perceived as the board’s insufficient response to those concerns, and to the “liar” criticism, was a “tipping point” for the long-serving trustee, who said he had previously expressed frustration with the board’s slow-moving diversity efforts. The fellow trustee has since apologized to Banks and the board, he said. However, Banks said, he didn’t ask for an apology from the trustee; he sought an apology from the board’s leadership and asked that the trustee be reprimanded.

The board was no longer the sort of entity with which I wanted to be associated.

Less than two weeks after the remark, the board elected David T. Hayes, a business-administration and economics professor, as Coe’s 16th president. Hayes, who is white, had previously served as interim president.

Banks resigned later that month. “For the board leadership and the trusteeship committee to make such deceitful accusations is an assault on my character,” he wrote in his resignation letter. “Unfortunately, these actions are a clear indication that the board leadership does not have the will for frank discussions regarding diversity and inclusion or the capacity to advance a meaningful commitment to social and racial justice, diversity, equity, and inclusion.”

Three days after Banks resigned, Alan M. Anderson, a Minnesota lawyer, also stepped down from the board. He cited the treatment of Banks; the board’s lack of commitment to diversity, equity, and inclusion; and the recently concluded presidential-search process as leading to his departure.

“The board was no longer the sort of entity with which I wanted to be associated,” Anderson said. “I could not provide full, 100-percent support to the newly selected president.”

Anderson criticized the presidential-selection process, saying that it lacked integrity and that other trustees had a pre-existing bias toward Hayes.

The 14-member presidential-search committee comprised seven trustees, two faculty members, two staff members, and two students, according to a statement from the board. Coe ultimately received 57 applications, 28 percent of which were from members of underrepresented-minority groups; 21 percent were from women. Of the 10 finalists who were interviewed by the committee, three were women, seven were men, and two were people of color. After a committee vote, the three remaining finalists were white men.

In his letter, Anderson said that administrators and staff who participated in the final interview, and the students on the committee, had opposed the selection of Hayes.

“Yet the board determined to ignore these important constituencies,” Anderson wrote. “How can we as a board simply ignore a significant portion of the faculty and the Bipoc students who now comprise about 30 percent of the college’s student body?”

Banks’s discontent with the board was brewing months before the presidential search began.

He had led what he described as a “historic” campuswide endeavor in support of racial justice, diversity, equity, and inclusion in June 2020, as nationwide protests against racial injustice surged. That month, the trustees passed a resolution that pledged antiracism training for the board, faculty, and staff; the addition of a general-education course requirement or program on antidiscrimination; and the creation of a diversity, equity, and inclusion committee. Banks served as chair of that committee.

“We wanted things that would begin to lay a foundation for transformative change,” Banks said.

While the board acted on some measures, it was slow about advancing others, Anderson and Banks said.

Following Banks’s and then Anderson’s resignations, the Student Senate and the Coe College Black Alumni Assocation mobilized. Students were joined in protest by teachers and alumni, speaking out against what they called a history of neglect from the college on issues of diversity, equity, and inclusion. Some alumni wrote directly to the board with demands.

“The treatment of Mr. Banks by the Board has shown that its passage of DEI initiatives is hollow,” the alumni group wrote in a letter.

The letter asks that the trustee who called Banks a liar be reprimanded, and that the board apologize to Banks “formally and in writing,” among other things.

How can we as a board simply ignore a significant portion of the faculty and the Bipoc students who now comprise about 30 percent of the college’s student body?

“It appears that the Coe board would prefer to accept the resignation of Darryl,” the letter continues, “instead of creating a socially progressive environment for faculty and students.”

In a statement to The Chronicle, the board said it has adopted a new code of conduct that focuses on defining expectations for how trustees are expected to interact with one another. The college is also reviewing the possibility of adding students and faculty members to the board and its committees, according to the statement. Board members are also in the process of identifying a senior administrator who will report to the president and represent diversity initiatives.

Carson Veach, chair of the board, said in a statement that a board committee, possibly with the new student and faculty representatives, will begin its work in early 2022 and report its findings to the board next year.

“You would not have a college without a president, nor should you have a college without a senior vice president for diversity, equity, and inclusion,” said the alumni in a letter to the board. “This should not be considered an ‘initiative.’ This should be a permanent component of the administration, and as such, institutionalized into the bylaws, as well as being a line item in Coe’s annual budget.”