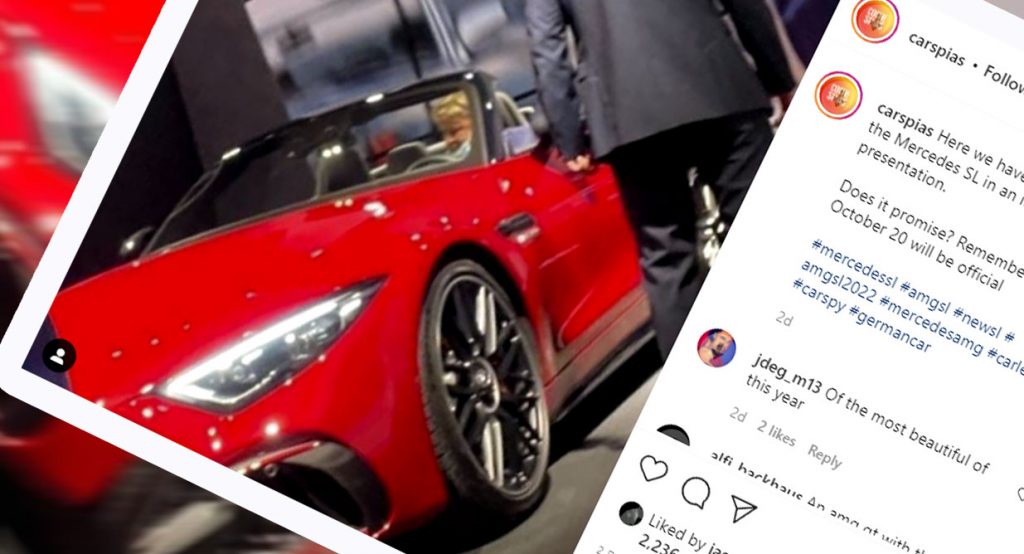 We’re only a few weeks out from the full unveil of the replacement to the Mercedes-Benz SL roadster that will marketed under the AMG banner this time, and already we know plenty about it thanks to our spy photographers and Benz’s steady drip of teasers.

But while our spy pics shed light on the final body shape, and Mercedes’ official communications have revealed plenty about the aluminium chassis structure, 2+2 seating and luxurious interior, this grainy image posted to the Instagram page of master leakers, Cochespias, reveals a much more aggressive car than we were expecting.

Yes, it’s a terrible pic, almost certainly shot covertly at an advance press or dealer event at which mobile phones were forbidden. It’s blurry, and you can’t see the front of the car. But you can see enough to know that Mercedes’ idea of making the eighth-generation SL the roadster sister to the next generation AMG GT coupe has turned it into a very different kind of SL.

While they were available with plenty of underbonnet firepower, recent SLs have been more open-top cruisers than true sports cars. But with its double eight-spoke wheels, angular headlights and pinched waist, this one looks like it’s ready for some serious action.

And the choice of a bold red, instead of a subtle silver or grey, as the launch color is clearly designed to communicate the message that this is a proper driver’s car.

We can’t see the grille in this leaked image but we know from our own bank of spy shots to expect a row of vertical fins, much like the ones on the Panamericana grille of the AMG GT. And behind that grille will be a choice of engines, including mild-hybrid turbocharged 3.0-liter sixes, twin-turbo V8s and potentially the 834 hp petrol-electric combo from the new AMG GT 63 E Performance.

That’s all still to be confirmed when Mercedes officially reveals the SL on October 20. But we already know that the lightweight aluminium architecture it shares with the next generation AMG GT coupe is significantly stiffer than the structure of the outgoing AMG GT Roadster it effectively replaces.

We also know that the interior now features 2+2 seating and a dashboard design that pairs a 12.3-inch instrument cluster with a 11.9-inch central touchscreen, like the one seen on the S-class sedan. But one bit of technology the SL won’t feature is a retractable hardtop. The SL will come with a folding canvas rood for the first time since 2001.