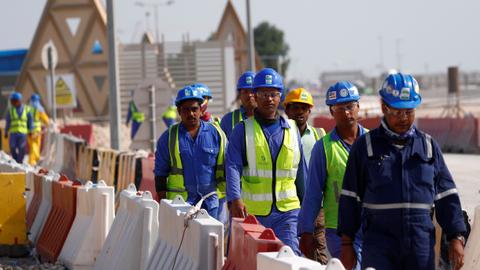 The International Labour Organization said numbers could be higher as authorities don’t classify all work-related deaths as such.

Fifty migrant workers have died in Qatar in 2020 and over 500 were seriously injured.

The UN’s International Labour Organization stated the numbers on Friday, as the Gulf nation readies for the 2022 World Cup.

The ILO report, entitled “One is too many”, said that the top cause of fatalities were falling- with most happening at the workplace.

“Thirty (deaths) occurred pre-hospital and 20 occurred in hospital,” it added, which ILO says is the most comprehensive picture ever of work-related deaths in the country.

The report comes amid criticism of working conditions for hundreds of thousands of migrant labourers – including those who built the stadiums for the World Cup.

The ILO said numbers could be higher as authorities don’t classify all work-related deaths as such, including unexplained deaths among healthy workers and heat-related fatalities.

That data gap should be addressed, with better injury investigations, Max Tunon, head of the ILO’s Qatar office, told

Qatar, which has made a series of labour reforms such as introducing a $275 monthly minimum wage and simplifying the process for changing employers since being selected to host the football tournament, welcomed the report saying it “highly values” its collaboration with the ILO.

The country also added that it reflected its commitment to transparency on labour rights, and was reviewing the recommendations.

“Qatar… will continue working with the ILO to ensure that labour reforms are implemented effectively and that Qatar is continuously improving labour practices and increasing safety for all workers,” a government statement read.

More than two million foreigners work in Qatar, many employed directly or indirectly on vast infrastructure projects for the World Cup.

According to the report, most of those injured came from Bangladesh, India and Nepal, and worked mainly in the construction industry.