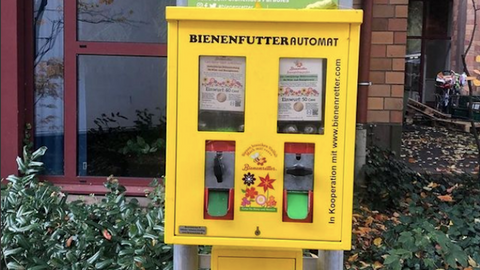 Self-declared “beefluencer, inventor & do-gooder” Sebastian Everding first thought of using gumball machines as dispensers in 2019, according to the Washington Post.

“In spring 2019, Everding marveled over how a German comedian, Oliver Tissot, repurposed an old gumball machine into an ‘automatic joke machine.’

“Put in 20 cents, turn a dial and get a classic German joke. Everding, then 36, thought it was ‘ingenious’ and contacted Tissot. He wanted in,” Dan Rosenzweig-Ziff writes for the Washington Post.

Everding arranged a former gumball machine to dispense jokes and placed it outside his home in Dortmund in the Ruhr River valley. He liked the idea, but he wanted to take it further. Rosenzweig-Ziff writes: “An avid gardener, he thought of his beloved bees — the pollen-spreading environmental linchpins whose numbers are dwindling under pressure from climate change, pesticides and other threats.”

So Everding built his next gumball machine into a seed dispenser, one that delivered wildflower seeds to help the dwindling number of bees survive and regenerate. His experiment has now grown to more than 160 dispensers across Germany, Austria and Belgium in places such as libraries and train station kiosks, energy service centres and veterinarian offices.

“The vending machine alone cannot stop the problems with the wild bees,” Everding tells the Washington Post. “But we hope the project changes awareness of the population.”

A 2015 report by the International Union for Conservation of Nature (IUCN) warns that “Nearly one in 10 wild bee species face extinction in Europe while the status of more than half remains unknown.” The report explains that “The first-ever assessment of all European wild bee species shows that 9.2% are threatened with extinction, while 5.2% are considered likely to be threatened in the near future.”

Everding began a partnership with Bienenretter Manufaktur (“Bees Manufacture” – link in DE), an organisation “that promotes sustainable beekeeping and other eco-friendly initiatives” as well as FINE Frankfurt Institute of Sustainable Development, “which created an educational component around the seed dispensers, dubbed ‘Bienenautomats’.”

“Let’s make something really crazy to make the world a better place,” Everding told Tissot at the time.

Once a volunteer at a shelter, an enthusiast about pesticide-free gardening, and an amateur tinkerer, Everding ended up building his Bienenautomat (link in DE). With the publicity from local media, he soon found himself swarmed with requests from strangers around the country.

“Everybody says it’s so easy to help,” says Tissot, 58. “For people my age, chewing gum machines are perfect to get us to take action because they remind us of our childhood,” as did the childhood connection to a famous German cartoon character, Maya the Bee.

Everding declined the initial orders, deterred by the cost, effort and time involved, but when two orders came in from a school and a church, he could resist no longer. “Sensing the sustainability benefits and interest from children,” the Washington Post writes, “he couldn’t refuse.”

To this date, Everding’s Better World Machines have completed 200 orders and has 80 more on the waiting list.

Each machine “takes up to five hours of restoration and refitting. He begins by paying painters to sand and repaint the machines yellow. He then hammers out dents, makes repairs and puts on water-resistant bee stickers. For many of the older machines, which came into use before euro was in circulation in 2002, he also reconfigures the coin slot to fit euro coins.”

“The great thing about it is really the variety of people and locations wanting to do their part in addressing climate change,” Everding says.

This year, a public library in Berlin put up the 100th Bienenautomat in Germany. Tim Schumann, head of that library, the Washington Post writes, says “families with young children often come to the building to get seeds — and learn about bees along the way.”

“Small seeds can be an act of empowerment,” Schumann says. “You can make your small neighborhood aware and part of restoration.”

Schumann, like many other of Everding’s customers, heard about the project through social media and was excited to join, fundraising 650 euros ($759) to buy a machine.

The librarian echoes Everding, who hopes the German government and the European Union will ban all pesticides and move away from “industrial agriculture to more ecological agriculture.”

In summer 2022, Everding plans to visit each of the Bienenautomats to meet some of the people he has inspired to take action, and hopes his project to save wild bees is just the start.