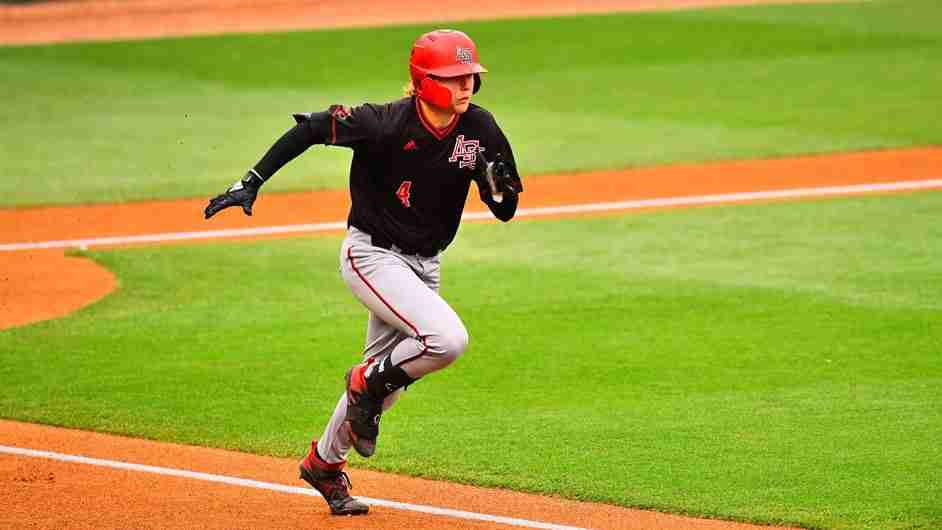 FAYETTEVILLE, Ark. – Jaylon Deshazier went 2-for-4 with a run scored, but the Arkansas State baseball team could not overcome three big innings by fourth-ranked Arkansas, falling to the Razorbacks 10-3 Wednesday at Baum-Walker Stadium.

A-State (7-26) registered five hits, while Arkansas (30-7) pounded out 14 hits and scored three or more times in the second, third and fifth innings to lead by as much as nine runs.

The Red Wolves managed to get on base in other ways than just via the base knock, as the Hogs’ pitching staff walked seven batters. Jacob Hager and Brandon Ulmer both walked twice, with Ulmer coming around to score, while Jared Toler drove in two runs on the day.

Jakob Frederick (0-2) was the first of seven A-State pitchers used in the ballgame, going three innings and striking out two. Walker Williams, Kevin Wiseman, Brandon Anderson and Tyler Jeans each worked shutout innings of relief, with Jeans retiring the side in the eighth.

Kendall Diggs went 3-for-3 with two RBI for the Razorbacks while Dylan Leach registered two hits and two runs scored to go along with three RBI. Jace Bohrofen scored three times on a pair of hits.

Will McEntire went the first 4 2/3 innings for Arkansas, striking out five and walking four. Heston Tole (1-0) entered in the fifth and worked 1 1/3 scoreless inning with three punchouts.

The Razorbacks scored the game’s first six runs with three runs apiece in both the second and third innings. In the second, Diggs scored Jalen Battles from third with a sac fly to left, followed by a two-run homer by Leach that plated Bohrofen.

Bohrofen doubled home Battles and Robert Moore in the third, then touched home on an RBI single by Diggs to make it 6-0 after three.

A-State put its first run on the board when Toler singled home Ulmer in the top of the fifth, but Arkansas responded with RBI singles by Braydon Webb and Leach to make it 8-1. Back-to-back fielder’s choices plated two more in the frame to make it 10-1.

The Red Wolves scored two more in the seventh on back-to-back bases-loaded walks to Toler and Hager, scoring Deshazier and Cooper Tremmel to make it 10-3. Both teams remained scoreless the rest of the contest, with both sides being retired in order in their final at-bats.

A-State returns home to face Troy in a three-game Sun Belt Conference series beginning at 6 p.m. Friday. ESPN+ is slated to broadcast the outings on Saturday and Sunday, while the radio broadcasts of all three games can be heard on The Ticket Radio Network stations 95.3, 96.9, 104.1 and 970 AM.

Editor’s note: The Ticket Radio Network is part of the EAB Sports Network. Local station The Ticket 104.1 KBRI FM can be listened to in Southeast Arkansas.