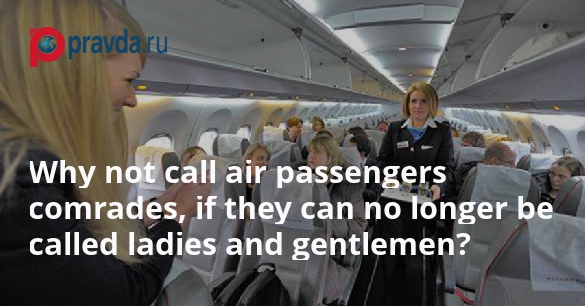 Those who fly British Airways will no longer hear “ladies and gentlemen” in announcements. Pilots and flight attendants will use gender-neutral greetings instead.

The announcements that one hears when on board an airplane are to “reflect the diversity” of those who travel by air.

Unlike the English language, the Russian one has a strong presence of the category of gender. The exception, perhaps, can be made in relation to the genderless word “comrade”, which equated representatives of the two sexes. Such a lingual innovation infuriated Bulgakov’s Professor Preobrazhensky, but a series of Russian revolutions could serve as an excuse for such a speech pattern. Yet, the Brits did not stop to do nearly the same in peacetime.

The British airline is not alone in this regard and, if approved by higher authorities, it will join other airlines that avoid mentioning women and men in their announcements:

As recently as last month, another European airline, Air Malta, announced that its pilots would use phrases such as “Attention, all passengers!” rather than traditional and familiar terms.

Ground transportation providers have outstripped their counterparts in the air travel industry. The use of the phrase “ladies and gentlemen” was discontinued in London’s public transport back in 2017.


According to The Telegraph, the decision was made due to the large number of children traveling after quarantine, as well as for the purpose to reflect new social realities.

A spokesman for BA said in response to the claims:


“We celebrate diversity and inclusion and we’re committed to ensuring that all our customers feel welcome when travelling with us.”


It has long been no secret that transnational elites are interested in reducing the world’s population, hence the tendency to legalise same-sex marriage, legitimise abortion and the notorious childfree movement. If there are nations, where such practices are not welcome, they will find other ways to pursue the same goal.

Of course, many passengers wonder why their language has to undergo such bizarre changes. Someone will always get offended, no matter how one may try to change those announcements. To crown it all, for most people it is much more important that their flight goes comfortably and the plane lands on time, without a delay.