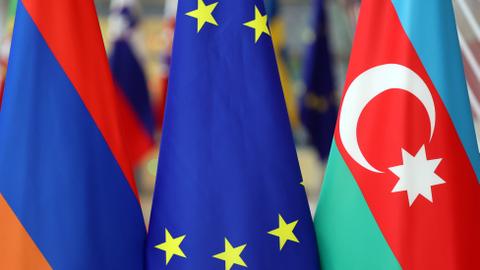 Azerbaijan offers normalisation plan that a joint commission will demarcate borders according to UN and November 2020 truce deal brokered by Russia.

Armenia has accepted the document submitted by Azerbaijan on five principles to normalise bilateral ties, the Azerbaijani president has said.

Ilham Aliyev made the remarks on Saturday during a phone call with Russian President Vladimir Putin during which they exchanged views on relations between Armenia and Azerbaijan in the post-conflict period, Azerbaijan’s presidency said in a statement.

The leaders discussed establishing a working group to prepare a peace agreement, the establishment of a commission on delimitation of borders, as well as the activities of a working group on transport issues with the involvement of Azerbaijan, Russia and Armenia.

The two also spoke on the April 6 meeting between Aliyev and Armenian Prime Minister Nikol Pashinyan in Brussels.

Azerbaijan had earlier submitted the proposal to Armenia, which calls for mutual recognition of each other’s sovereignty, territorial integrity, inviolability of international borders and political independence; mutual confirmation that the two states have no territorial claims against each other and that they will not make such claims in the future; refrain from threatening each other’s security, using threats and force against each other’s political independence and territorial integrity, and other situations incompatible with the purposes of the UN Charter; setting borders and establishing diplomatic relations; and opening transportation and communication lines, establishment of other relevant communication networks and cooperation in the fields of interest.

Relations between the former Soviet republics have been tense since 1991, when the Armenian military occupied Nagorno-Karabakh, also known as Upper Karabakh, a territory internationally recognised as part of Azerbaijan, and seven adjacent regions.

After new clashes erupted in September 2020, Azerbaijan liberated several cities and over 300 settlements and villages that were occupied by Armenia for almost 30 years.

The fighting ended in November 2020 with a deal brokered by Russia.