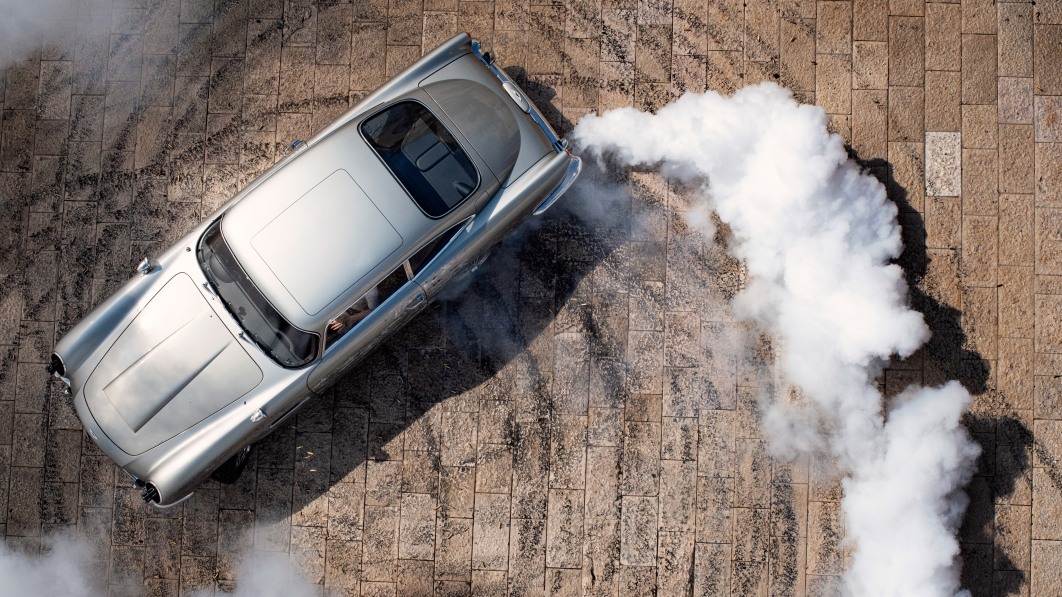 Note: The following overview of the cars in No Time To Die contains spoilers. Read at your own risk, or come back after seeing the film to make sure you caught everything.

No Time To Die picks up right around where Spectre leaves us. James Bond (Daniel Craig) and Madeleine Swann (Léa Seydoux) are driving along in Bond’s restored and iconic DB5 in Matera, Italy. Things don’t stay all that cheery for long in picturesque Matera, though. As is tradition in Bond films, the first car chase hits us with an explosion of action in what’s a super-long opening scene.

Fourth-gen Maserati Quattroporte: The baddies in the beginning are driving a Maserati and chasing after Bond in the DB5. Specifically, they’re in a fourth-gen Quattroporte, which feels right for a chase scene in Italy. Its squared-off looks are mean enough, and its Italian growl is a good background soundtrack to the DB5’s inline-six.

In addition to the Quattroporte, the chase scene in Matera is home to a couple of the best stunts of the entire movie, including the arch jump done with a Triumph motorcycle seen in trailers — Matera is extremely hilly.

Eventually, Bond and Swann find themselves in the DB5 again together, which is where the famous gatling gun scene from the trailer commences, but not before the bulletproof windows and body of the DB5 are thoroughly tested. RIP to the first-gen Range Rover Classics and Jaguar XFs that joined the Maserati in pursuit of Bond (here’s a list of other Bond cars over the years).

As the DB5 escape scene concludes, we catch a glimpse of what appears to be a Ferrari from the 1970s. However, the view was far enough away that we’ll need a second look to be sure of the exact model.

Land Rover Series III: Next time we see Bond, he’s fishing in Jamaica and driving around a blue Land Rover Series III. It’s yet another of the many Land Rover products featured throughout the film, and unlike most of Bond’s Aston Martins, this one doesn’t seem to have any unique features. The other intriguing vehicle out of Jamaica? An old Chevrolet Bel-Air expertly and effectively piloted by Bond newcomer, Ana de Armas.

Next up, we get a few shots of the new and still-not-for-sale Aston Martin Valhalla mid-engine supercar (also seen in trailers). Bond’s old boss M is in the scene which appears to have been shot in some secret wind tunnel of sorts. Much to our dismay, nobody ends up driving the Valhalla in the film. Could it be a teaser for what the next 007’s car is? There’s a decent chance of that, considering the Valhalla played such a small role in this Bond film.

Aston Martin V8 Vantage: Boy were we happy to see the original V8 Vantage from the late 1970s and 1980s make an appearance. In fact, it made multiple appearances throughout the film. It’s difficult to get a more badass combo than Daniel Craig behind the wheel of a blacked-out Aston Martin Mustang.

Off-road vehicles aplenty: As seen on several trailers, things take a turn to the off-road side of things with flying Land Rover Defenders — Land Rover even made special James Bond versions of the SUV. Bond wasn’t behind the wheel of any of these Defenders, though. Instead, he pilots a Toyota Land Cruiser in the Norway portion of the film as he’s pursued by Range Rover Sport SVRs and Defender V8s with double the horsepower. Plus, Triumph motorcycles are back again for the two-wheel enthusiasts in this bumpy chase scene.

Aston Martin DBS Superleggera: The stunning and still relatively new DBS Superleggera rocks up to the party in Norway, too, quickly showing everybody its bonkers 715-horsepower V12 is nothing to sneeze at. This two-seat Aston is piloted by Nomi, Bond’s 007 replacement, and she’s clearly gone through the same secret agent driving training that Bond did.

And that, ladies and gentlemen, is where we’ll leave you without getting too spoiler-heavy. There are plenty of classic Bond gadgets and gizmos throughout the film. Plus, a bizarre plane/submarine combo vehicle makes an appearance at some point. In short, though, the cars of Daniel Craig’s last Bond film don’t disappoint, and neither do the stunts.

There is plenty for car enthusiasts to ogle at when No Time To Die opens in theaters on October 8.