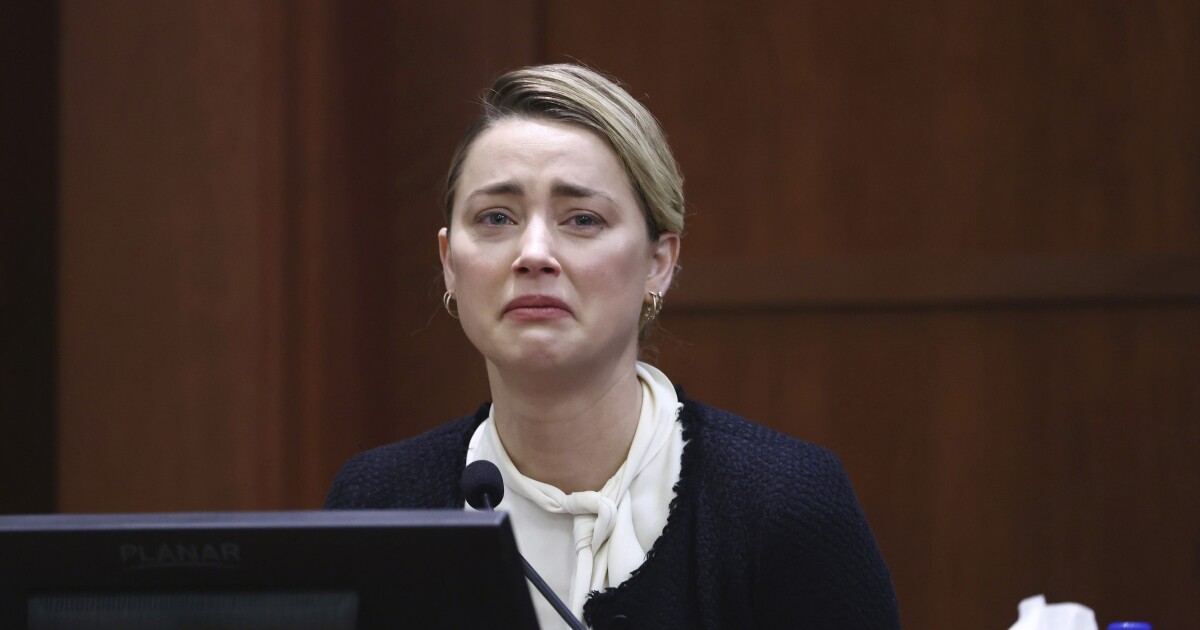 Amber Heard accused her ex-husband, Johnny Depp, of sexual assault, alcoholism, infidelity, excessive drug use, and verbal and physical abuse while testifying at their defamation trial in Fairfax, Va., on Thursday.

For the second consecutive day, the actor took the witness stand to describe her turbulent relationship with the “Pirates of the Caribbean” star. Depp filed a $50-million defamation lawsuit against Heard after she wrote a 2018 op-ed for the Washington Post as a “public figure representing domestic abuse.” Heard has countersued Depp for $100 million.

During a pivotal moment in her testimony, streamed by Court TV, Heard told her side of the story about a 2015 fight that left Depp’s middle finger disfigured on his right hand. Depp previously accused Heard of throwing a large bottle of vodka at him that shattered and severed the tip of his finger.

Heard’s recollection of the event differed significantly from Depp’s. During a night at the house he was renting in Australia while filming the fifth “Pirates of the Caribbean” movie, Depp became “belligerent” and began “throwing things” and “screaming” at his new wife, Heard recalled.

According to Heard, Depp proceeded to slam her against a wall, squeeze her neck, berate her and throw her across the room onto a table. While on top of her on the table, Depp allegedly shoved a bottle into her vagina repeatedly.

“Can we not … do this?” Heard said between deep, shaky breaths when asked by her attorney to describe the bottle penetrating her.

Heard claimed that she did not become aware of Depp’s finger injury until the next morning when she woke up to Depp’s blood smeared on the walls of the house. The jury viewed several photos depicting blood splatters, bottles and broken glass strewn about the scene.

An attorney for Depp did not immediately respond Thursday to a request for comment.

“I put together that he was using his finger … as a paintbrush,” Heard said. “I figured out he was missing a finger. He held it up, and I said, ‘What did you do?’”

Another key part of Heard’s testimony revolved around the 2014 Met Gala, during which Depp allegedly accused his partner of flirting with someone else. After the event, Heard said Depp became angry with Heard, shoved her and grabbed her by the collarbone in their hotel room.

Heard testified that she shoved Depp back and he threw a bottle at her before forcing her onto the sofa and whacking her in the face. After the altercation, Heard suspected she had a broken nose but was otherwise uninjured, she told the jury.

“Sometimes I didn’t think [Depp] understood how much he could hurt me physically,” Heard told the jury. “In these fights, I tried to stand up for myself … I pushed him off of me and tried to hit his hands away. I tried to always get back up, which … almost always made it worse. …

“I would yell at him and scream at him,” she continued. “I called him ugly names — so ashamed of the names we called each other. It’s awful. … We both got into that pattern. … Nothing I could do would change the sobriety patterns … and nothing I did made him stop hitting me. Nothing.”

The “Aquaman” actor also accused Depp of micromanaging her career by screening scripts she received and preventing her from accepting roles that involved romantic scenes or revealing costumes. She recalled that Depp allegedly became upset with her for working on a movie that required her to perform a kissing scene with James Franco, whom he “hated.”

According to Heard, that argument — as well as Depp’s excessive drinking — led to an incident on a May 2014 flight from Boston to Los Angeles that also came up in Depp’s testimony. On the plane ride, an intoxicated Depp allegedly began interrogating Heard about Franco in vulgar terms, Heard testified.

Though she tried to avoid him by switching seats on the plane, Depp pursued her and eventually slapped her in the face, Heard claimed. According to CBS News, Depp has denied drinking excessively before the flight and recalled hiding in the plane bathroom to escape Heard.

After a recess, the trial will continue on May 16.