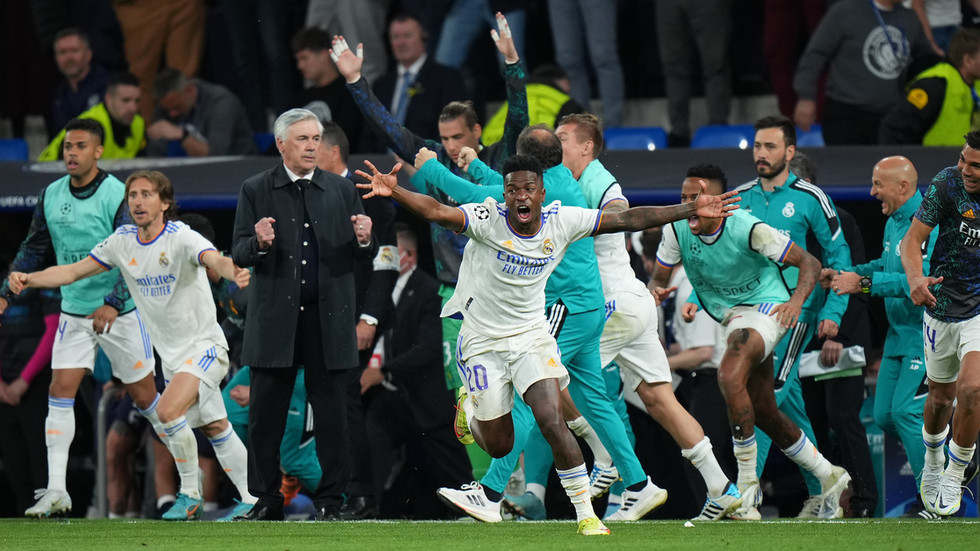 Real Madrid Carlo Ancelotti praised his team’s remarkable resilience as the Spanish giants staged another stunning comeback to shock Manchester City and set up a Champions League final against Liverpool.

City looked assured of a place in the Paris final against their Premier League rivals when a finish from Riyad Mahrez put Pep Guardiola’s men in front at the Bernabeu and handed them a 5-3 aggregate advantage in the semi-final tie.

But in front of raucous support, Real’s never-say-die attitude came to the fore yet again as substitute Rodrygo stuck twice in the space of 91 seconds to send the game to extra time.

Karim Benzema then continued his sensational form by converting a penalty in the 95th minute, giving the hosts a 6-5 aggregate lead which City were unable to overhaul.

There were ecstatic scenes from the Real players, staff and fans at the final whistle as they pulled off another barely-believable comeback, having performed similar heroics against Paris Saint-Germain and Chelsea in the preceding rounds of the competition.

Los Blancos will now aim to add to their record haul of 13 European Cups when they meet Liverpool in Paris on May 28 – in a rematch of the 2018 final when Real earned their last continental crown with a 3-1 victory.

Italian boss Ancelotti was seen in tears at the conclusion against City and becomes the first manager to reach five Champions League finals, having won the competition during his first stint with Real in 2014 and twice with AC Milan.

“I cannot say we are used to living this kind of life, but what happened tonight it happened against Chelsea and also against PSG,” said the 62-year-old, who at the weekend became the first manager to win the title in each of Europe’s top leagues after Real confirmed the La Liga crown.

“If you have to say why, it is the history of this club that helps us to keep going when it seems that we are gone.

“The game was close to finished and we managed to find the last energy we had. We played a good game against a strong rival.

“When we are able to equalize we had a psychological advantage in extra time. I have no time to think about this [losing the game]. It was difficult as City had control of the game but the last opportunity we were able to go to extra time.”

Ancelotti has faced Liverpool in Champions League finals before, being on the wrong end of a comeback in the famous Istanbul final with Milan in 2005, before avenging that defeat against the Anfield club in Athens in 2007.

“I am happy to be there in the final, in Paris against another great rival. We are used to it. It will be a fantastic game for football,” added Ancelotti.

It was City who had landed what seemed destined to be the decisive blow when Mahrez whipped a smart finish past Thibaut Courtois in the 73rd minute at the Bernabeu to give them a two-goal cushion in the tie.

But Real’s latest feat of magic was set up by a rapid-fire double from Brazilian Rodrygo, who had been introduced for Toni Kroos as they sought a breakthrough.

First, Rodrygo struck in 90th minute when he arrived ahead of Ederson to turn home a Benzema cutback, before heading home just over 90 seconds later when Marco Asensio flicked on a cross from Dani Carvajal.

Real found themselves in front early in the first half of extra time when Ruben Dias brought down Benzema in the box.

City had come agonizingly close to sealing it in normal time through substitute Jack Grealish, while Fernandinho was inches away from turning in a Phil Foden header at the back post.

In the end it was more misery for the big-spending Etihad club, and personally for Guardiola as his search continues for another Champions League title to add to the pair he won at Barcelona a decade ago.

“We were close but we were in trouble when they put balls into the box, with so many crosses,” said the Catalan.

“I had defeats in the Champions League, at Barcelona and we could not reach the final, but there’s no doubt it’s hard for us.

“We can’t deny we were so close to the Champions League final. We didn’t play well in the first half but it’s normal in this competition.”

Guardiola, whose team are locked in a tense Premier League title battle with Liverpool, holding a one-point advantage over the Reds with four games to play, embraced Ancelotti at the whistle and praised Real’s indomitable spirit.

“It has happened many times in their history. They put a lot of players in the box, all of them crosses, and they scored two goals. We didn’t suffer much until they scored, but we didn’t play our best,” said Guardiola.

“After the goal we controlled the game, Jack [Grealish] helped us control it. We could not finish when we were close.

“We need time now. We have to do it with our people. The players gave everything. We were so close. We couldn’t do it. In the history of football this happens. With the people supporting them it’s more difficult.

“This will have a positive impact on the Real players. On us? I don’t know. They won, that’s it. We weren’t suffering all that much I don’t think.”