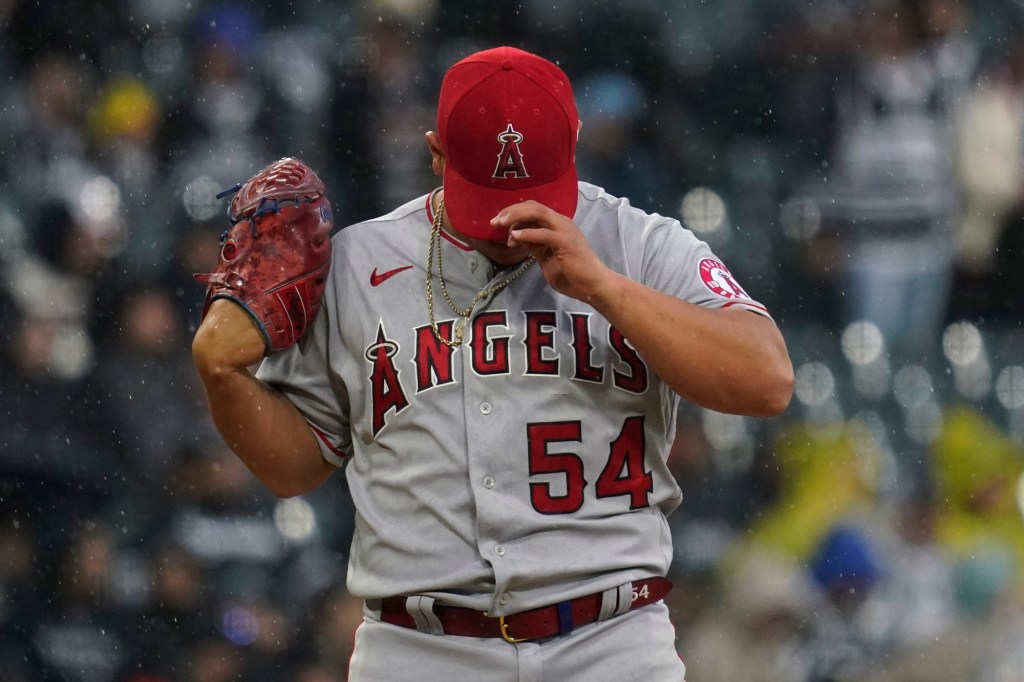 CHICAGO — The Angels optioned left-hander José Suarez on Sunday, a day after his fourth straight disappointing outing to begin the season.

Suarez had posted a 6.35 ERA in 17 innings. He failed to finish five innings in any of his starts.

The Angels recalled left-hander Kenny Rosenberg to take Suarez’s spot on the roster. In the short term, Rosenberg provided extra coverage for the bullpen on Sunday because long reliever Jaime Barria was unavailable after pitching three innings on Saturday.

Manager Joe Maddon said he would address the Suarez decision and the implications on the rotation after Sunday’s game. A day earlier, Maddon said he saw positives in Suarez’s performance when he gave up four runs in four-plus innings in a loss to the Chicago White Sox.

“I think he’s gonna be a very good major league pitcher and he’s going to be a big part of our success this year,” Maddon said on Saturday. “Sometimes you have to stay with people, especially if you believe in them.”

Suarez said after the game that he felt like he had made progress and regained his confidence.

Suarez earned a job in the rotation by posting a 3.75 ERA in 98-1/3 innings last season, but so far this year he hasn’t lived up to that.

By optioning Suarez on Sunday, rather than waiting until new roster rules begin on Monday, the Angels can send him down for just 10 days. Pitchers optioned for the rest of the season must be down for 15 days.

The Angels upcoming rotation is uncertain, because of the illness to Noah Syndergaard.

Syndergaard, who was scratched from his scheduled start on Friday because of illness, said on Sunday morning that he was feeling better. He then headed out to the field to throw a bullpen session.

Patrick Sandoval is scheduled to pitch on Monday in Chicago. Shohei Ohtani and Reid Detmers were in line to start the first two games in Boston on Tuesday and Wednesday.

Syndergaard could be inserted on Tuesday or Wednesday, bumping the other pitchers back a day, or he could simply pitch on Thursday, which would have been his normal turn.

Suarez’s next turn would have come on Friday, the opener of a three-game series against the Washington Nationals at Angel Stadium.

The Angels could have their other starters work on four days rest — which is standard for most pitchers but not something any of their pitchers have done this season — or they will need to insert someone new in the rotation. Even if they did that, they would still need a spot starter somewhere to make sure Ohtani didn’t pitch on less than five days rest.

Rosenberg could also start, or they could bring up Jhonathan Diaz, who has a 1.96 ERA at Triple-A Salt Lake. Griffin Canning, who is on the 60-day injured list with a back injury, is not eligible until June 6.

Matt Duffy was placed on the injured list with no injury designated, which typically means a player is on the COVID-related injured list. Duffy was originally in the Angels lineup on Sunday, but he was replaced about an hour before the first pitch.

Jack Mayfield was recalled to take Duffy’s roster spot. Mayfield had been optioned on Friday, but he remained with the team as part of the taxi squad.

Rosters had been expanded for the start of the season to compensate for the shortened spring training, but on Monday the limit goes from 28 to 26. There is also a limit of 14 pitchers, not including two-way players.  The Angels currently have 15 pitchers, plus Ohtani.

Unless the Angels want to eliminate two pitchers, which seems unlikely, they also would need to take one position player off the roster.

Andrew Velazquez and Mayfield are the only utility infielders with options. David Fletcher also has options, but it would be surprising if the Angels optioned him, despite his slow offensive start, because of his track record and defense.

It’s also possible that the Angels could option Jo Adell, since he is currently getting the least playing time of the four outfielders. So far the Angels have indicated they are comfortable that there is enough playing time to go around with Mike Trout, Taylor Ward, Brandon Marsh and Adell splitting time in the three spots. They want their players, including Trout, to have enough days off to stay fresh.