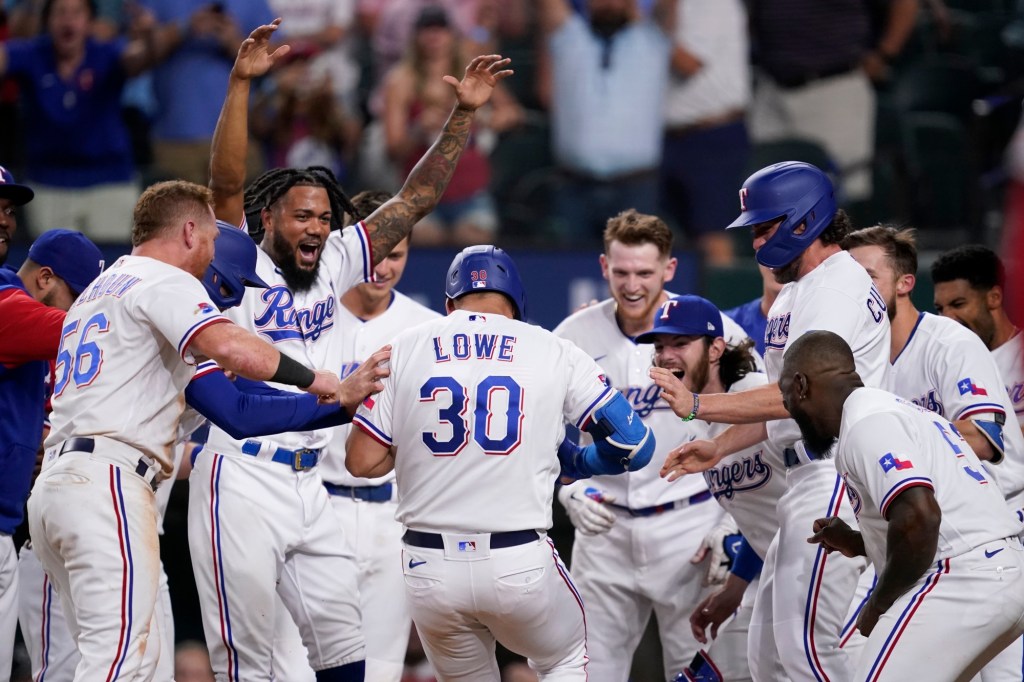 ARLINGTON, Texas — So much had gone right for the Angels through the first 37 games that they were bound to eventually hit a stretch when things didn’t work.

It happened this week in Texas, where the Angels lost, 6-5, to the Texas Rangers in 10 innings on Wednesday, getting swept in the three-game series.

It is the first time this season the Angels have lost three in a row. They reached the quarter-pole of the schedule with a 24-16 record.

Raisel Iglesias gave up a two-run homer to Nathaniel Lowe on his first pitch of the 10th, giving away the lead the Angels had taken by cashing in their automatic runner in the top of the inning.

The Angels lost four of seven games on this trip, and they blew late leads in three of them. Iglesias gave up a three-run homer to surrender a two-run lead in the bottom of the ninth on Saturday in Oakland, and Ryan Tepera allowed five runs with a one-run lead in the eighth on Tuesday.

“We will get our bullpen right,” Manager Joe Maddon said. “I have a lot of faith in these guys. It’s been a very difficult moment. We could have also scored more runs, so it’s not always about the pitching.”

The Angels certainly could have scored more in support of Shohei Ohtani, who gave them a chance to win by holding Texas to two runs in six innings. The game was tied when he left, and then relievers Mike Mayers and Jimmy Herget each gave up homers to give the Rangers a 4-2 lead.

Jared Walsh saved the Angels – temporarily – by belting a game-tying two-run homer in the top of the ninth, his second homer of the game.

After Iglesias escaped a bases-loaded jam in the bottom of the ninth with a strikeout of Jonah Heim, the Angels managed just one run in the top of the 10th, despite having the top of the order due. Taylor Ward singled, pushing automatic runner Andrew Velazquez to third. Velazquez scored after Mike Trout hit a ground ball to third and the throw home got away from the catcher.

Ohtani, Anthony Rendon and Walsh then all came up empty when the Angels had a chance to pad their lead.

“We got the right guys coming up to add on,” Maddon said. “You really want to add on as a visiting club with the new rule, the runner at second base. So that was all there for us. We just did not take advantage of that.”

The failure to add insurance proved costly just a few moments later, when Iglesias threw a slider that Lowe deposited into the seats just inside the right field pole. Although this wasn’t a blown save because he’d been in before the Angels took the lead, it was nonetheless the second straight game in which he had failed to close out a victory. Prior to that, he hadn’t blown a save since last July.

“When you’re a great closer like he is, you’re gonna run into some bumps,” Maddon said. “Look around the league. Other guys have gone through the same thing. He just needs our support and he’ll get that.”

The Angels ended up losing for the fourth time in Ohtani’s seven starts, even though he has a 2.82 ERA.

Ohtani worked around trouble most of the night. The traffic on the bases pushed Ohtani to crank up his velocity, which certainly alleviated any fears from his previous outing. Last week Ohtani allowed only one run in six innings, but he admitted afterward that he felt fatigued and didn’t have his best stuff. His velocity was down across the board, and his last fastball was 93.3 mph.

He had no such issues with his velocity this time around.

Ohtani threw eight pitches at 100 mph, the second-most he’s thrown in his career. He’d only thrown one 100-mph pitch in his first six starts. His average fastball was 98.6 mph, the hardest in any game of his career.

“I didn’t really change much,” Ohtani said through his interpreter, “but maybe my arm’s just getting used to all the stress.”

Ohtani had to crank it up in the first inning on Wednesday because he got into a quick jam, allowing a leadoff single and a one-out walk. He escaped that with a popout and a strikeout.

In the fourth, he issued a walk, hit a batter and gave up an RBI single when Heim blooped a 100-mph fastball from Ohtani into left field.

Heim got Ohtani again in the sixth with a bloop hit, this one driving in Kole Calhoun after he’d doubled, tying the score at 2-2. Heim is now 5 for 5 against Ohtani, including a grand slam in April.

“He’s definitely a good hitter and I felt like I made my pitches against him,” Ohtani said, “and it just went his way today.”