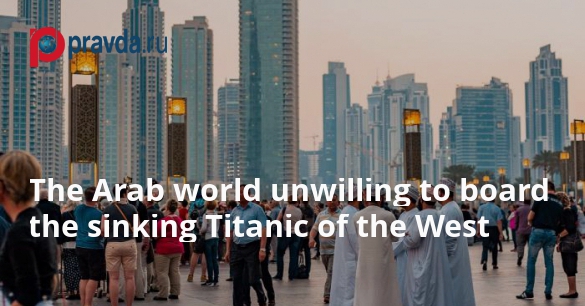 Political scientist Yevgeny Satanovsky believes that the Arab world, “being unable to count on the sinking Titanic of the West,” is revising its relations with the United States.

The West is a sinking Titanic

According to the political scientist, Russia’s relations with Arab countries and Turkey do not intersect with relations between the Russian Federation and Israel. Intrigue is not characteristic of the Russian leadership in general, Yevgeny Satanovsky believes.

“The last thing you can expect from Putin, Lavrov, Shoygu, or anyone from those in our top establishment, is to carry out cunning Byzantine schemes of intrigue in a hope that someone will like them. Rather, on the contrary, Putin writes across all hopes that he will do this or that,” the political scientist believes.

In his opinion, the actions of the Arab states in relation to Western countries are not connected with any statements that Russian officials have recently made.

In particular, they did not support the exclusion of Russia from the UN Human Rights Council because they see global changes taking place and do not consider the United States the clear winner of the emerging confrontation. The Arabs believe that the Americans want to save their supremacy, their “sinking Titanic.”

“The Arabs did not support this whole thing for one simple reason. They are revising their relations with the United States. They see how the world is changing, and they are totally not ready to count on the obviously losing side. They are ancient wise people, they have seen a lot. Why should they board the sinking Titanic?” Satanovsky said during a speech at the press center of Patriot media group.

Many analysts in the West share a similar opinion. For example, Anna Gadel, a political scientist at Institut Montaigne think tank in France, noted that the current state of affairs has become a catalyst in relations between the United States and the countries of the Persian Gulf. They feel that the balance of power has changed, and one should get ready for the countries of the Middle East to take on a new role in world affairs, she believes.

“The fact that we have excellent relations with the United States does not mean that we are their puppets that obediently carry out all their orders. That time has passed. We have our own strategies and priorities,” Abdulkhaleq Abdulla, a political scientist from the United Arab Emirates noted in turn.

Earlier, Saudi Arabia and the UAE refused to increase oil production at the request of the United States. Washington hoped that in this way it would be possible to compensate for the losses due to the embargo on Russian oil.

Meanwhile, Mohammad Barkindo, Secretary General of the Organization of the Petroleum Exporting Countries, said on Wednesday that Russia exports 7 million barrels of oil and petroleum products per day, and there was no free capacity in the world to replace such amounts.