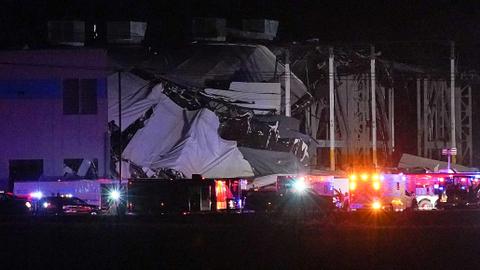 Three people died in severe weather in Tennessee, one person died and several were injured in an apparent tornado at an Arkansas nursing home, and around 100 people were trapped after a roof partially collapsed at an Amazon.com Inc warehouse.

Some 50 people are “likely” to have been killed in a devastating outbreak of tornadoes that ripped through Kentucky and several other US states.

Kentucky Governor Andy Beshear told local TV station WLKY early on Saturday that the number of dead could be “significantly north of that”, the Washington Post reported.

Beshear, who declared a state of emergency in his state, was quoted as saying the damage would be “some of the worst … we’ve seen in a long time”.

The Post added that a spokesperson for the state’s emergency management service said that rescue officials had not confirmed figures for deaths or injuries as of early Saturday.

In Arkansas, one person was killed and 20 others were trapped after a tornado struck the Monette Manor nursing home, US media reported.

Craighead county official Marvin Day told local news channels that rescuers had successfully pulled out those trapped in the building while the structure was “pretty much destroyed”.

In Illinois, authorities said around 100 people were trapped after a roof partially collapsed at an Amazon.com Inc warehouse near St. Louis late on Friday after tornadoes and strong storms blew through the area.

“Our Illinois State Police and Illinois Emergency Management Agency are both coordinating closely with local officials and I will continue to monitor the situation,” Illinois Governor JB Pritzer said.

In a statement sent to local media, Amazon spokesperson Richard Rocha said “the safety and well-being of our employees and partners is our top priority right now. We’re assessing the situation and will share additional information when it’s available.”

Officials were working through the early hours of Saturday to rescue employees at the facility – a third of which was reduced to rubble – who were on the night shift processing orders ahead of the Christmas holidays.

The Collinsville Emergency Management Agency described it as a “mass casualty incident” with “multiple subjects trapped at Amazon Warehouse”.

Footage shared across US news channels and social media of the Edwardsville Amazon warehouse showed a large part of the facility’s roof ripped off while one of the walls had collapsed into the building, with rubble strewn across the site.

DEVELOPING: This is a view of the Amazon warehouse in Edwardsville, where you can see the scope of damage and also search and rescue response. We’ve learned around 100 people were trapped inside. @KMOV pic.twitter.com/ToxT1L8cch