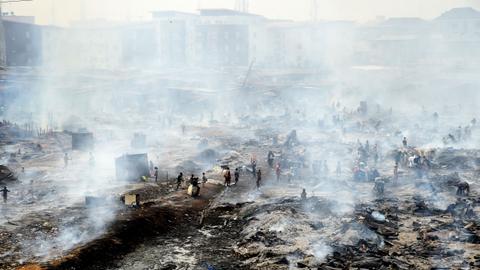 At least 200 people have been killed and more than 10,000 victims rendered homeless after their homes were razed by the bandits while scores are still missing.

Gunmen in Nigeria have killed at least 200 people in multiple raids this week in northwest Zamfara state.

“This is horrific and tragic. Over 200 persons were buried… due to the invasion by bandits,” a spokeswoman for Sadiya Umar Farouq, minister of humanitarian affairs, said on Sunday.

“We also worried about the displaced persons who are fleeing in their hundreds from their communities,” the minister added in a statement issued late on Saturday and confirmed by her spokeswoman Sunday.

“More than 10,000 victims have also been rendered homeless after their homes were razed by the bandits while scores are still missing.”

Clashes between herders and farmers over access to land has plagued northwest and central Nigeria for years, with some groups evolving into criminal gangs known as bandits who kill, loot and kidnap.

Babandi Hamidu, a resident of Kurfa Danya village said the militants were shooting “anyone on sight”.

The governor of Zamfara Bello Matawalle has downplayed the death toll, saying only 58 people were killed.

READ MORE: Why insurgent and bandit attacks are intensifying in Nigeria

‘An act of desperation’

Nigeria’s President Muhammadu Buhari condemned the attacks, describing them as “an act of desperation by mass murderers.”

The Nigerian government this week officially labelled bandits as terrorists, to bring tougher sanctions against convicted gunmen, their informants and supporters.

Military and police operations are currently on in the northwest.

Nigeria’s armed forces said they had killed 537 “armed bandits and other criminal elements” in the region and arrested 374 others since May last year, while 452 “kidnapped civilians were rescued”.

READ MORE: Bandits carry out another deadly attack on village in northwestern Nigeria