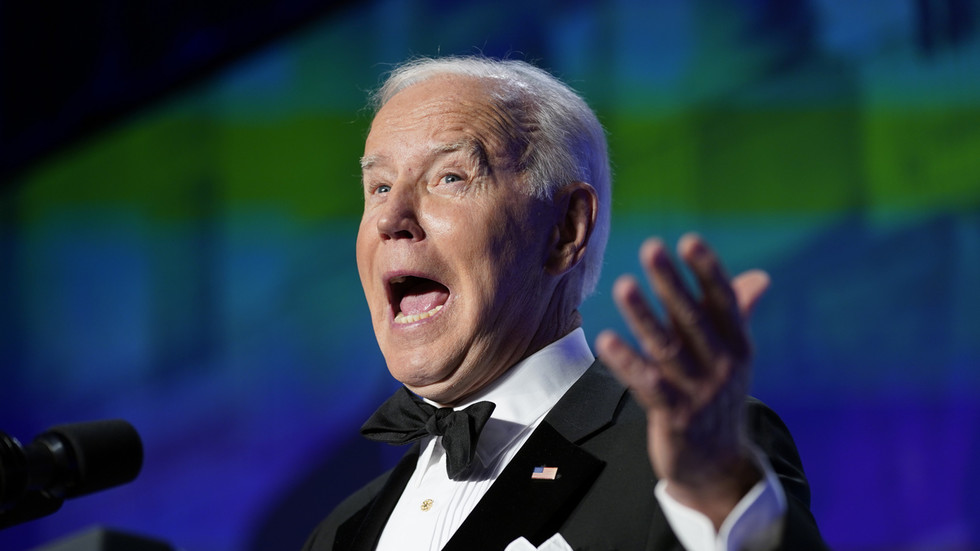 President Joe Biden made fun of his own approval ratings, roasted Donald Trump, and took a gentle ribbing from comedian Trevor Noah at the White House Correspondents’ Association Dinner on Saturday night. The dinner was shunned by Trump and canceled last year due to the coronavirus pandemic.

“I’m really excited to be here with the only group of Americans with a lower approval rating than I have,” Biden joked to the Washington, DC crowd, referring to his own sub-40% polling and to surveys showing just 36% of Americans trust the mass media.

United in unpopularity, Biden and the press poked fun at each other throughout the night. Biden jibed at Fox News reporters for all being “vaccinated and boosted,” despite many of the network’s conservative viewers refusing the Covid-19 vaccine.

Comedian Trevor Noah, hosting the event, mocked the president for his handling of the economy quipping “You know, I think ever since you’ve come into office, things are really looking up. Gas is up. Rent is up. Food is up. Everything,” and roasted MSNBC for its pro-Biden coverage.

Biden fired off more self-deprecating material, remarking that “Republicans seem to support one fella. Some guy named Brandon. He’s having a really good year. I’m kind of happy for him,” a reference to the phrase ‘Let’s go Brandon’, which has become a popular chant among Biden’s conservative opponents.

President Biden: “Republican seem to be supporting one fella. His name is BRANDON. He must be having a great year!” pic.twitter.com/wmbQmThQ8r

However, in a room full of Democrats and liberal journalists and guests, Trump and the Republican Party provided Biden and Noah with much of their material.

Noah compared Florida Governor Ron DeSantis to the “terminator,” hammering him for banning math textbooks so that “nobody knows how to count the votes.” DeSantis – whose state recently rejected 41% of math textbooks used in the state due to references to ‘Critical Race Theory’ and ‘Social Emotional Learning’ – was also indirectly mocked by Biden for trying to “Tear down Mickey Mouse’s house.” This quip referred to DeSantis’ efforts to strip Walt Disney World of its self-governance rights over Disney’s opposition to a law forbidding teachers from discussing sexuality and gender identity with elementary school children.

In explaining the absence of the Correspondents’ Association Dinner for the last six years, Biden sniped “we had a horrible plague, followed by two years of Covid.”

“Imagine if my predecessor came to this dinner this year,” he continued. “Now that would really have been a real coup that occurred!”

Biden: It’s the first time a president attended this dinner in six years. It’s understandable. We had a horrible plague followed by two years of Covid pic.twitter.com/0U9ln8ZMLw

As the event closed, Noah made one final dig at Biden over his administration’s handling of the withdrawal from Afghanistan last year.