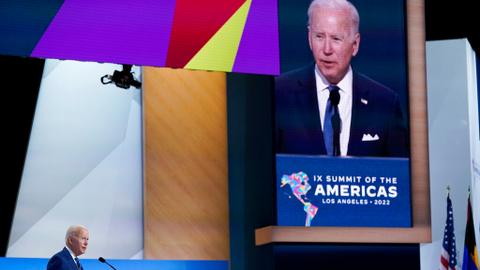 President Biden faces sharp criticism over the US decision to cut out three main regional rivals from the Summit of the Americas, as he vows to help Latin America and the Caribbean recover from economic distress.

US President Joe Biden has laid out his pitch to leaders from the Americas for a new
economic partnership at the start of a regional summit, even as he faced open rebuke over the exclusion of
Venezuela, Cuba and Nicaragua.

Speaking at the opening session of the Summit of the
Americas in Los Angeles on Thursday, Biden said his administration was committed to helping Latin America and the Caribbean recover from the Covid-19 pandemic, tackle irregular migration and improve living standards.

But he quickly faced sharp pushback over his decision to cut
out Washington’s three main regional antagonists, which spurred
a boycott by some leaders led by Mexican President Andres Manuel
Lopez Obrador, dealing a blow to Biden’s effort to reassert US
leadership.

Shortly after Biden’s speech that extolled the virtues of
democracy in the region, Belize’s Prime Minister John Briceno,
criticised the exclusion of Communist-ruled Cuba and leftist
Venezuela, calling the “illegal blockade against Cuba” an
“affront to humanity.”

“In fact, it is un-American. The time has come, Mr.
President, to lift the blockade,” Briceno said, confronting
Biden as he sat only a few feet away from him.

Briceno was followed by Argentina’s left-leaning president,
Alberto Fernandez, who declared “the silence of those who are
absent is calling to us” and insisted that the host country did
not have the power to impose the “right of admission” to the
conference.

But the plan, which appears to be a work in progress lacking
many specifics, stops short of offering tariff relief and will
initially focus on countries that already have US trade
accords.

US officials have openly accused China of pushing deals in
the developing world with strings attached to saddle their
partners with long-term debt.

With problems at the US-Mexico border also high on Biden’s
list of priorities, leaders were poised to issue a declaration
on Friday pledging measures to curb irregular migration and help
countries hosting large number of migrants to cope with them,
according to a draft document seen by Reuters news agency.

The White House did not immediately respond to a request for
comment on whether the document was final.

READ MORE: Summit of the Americas eyes plan to mitigate ‘impact of migration’

Leaders from North and South America meet in Los Angeles for Summit of the Americas. Yasmine El Sabawi reports from the event pic.twitter.com/7DbAxxlmDj