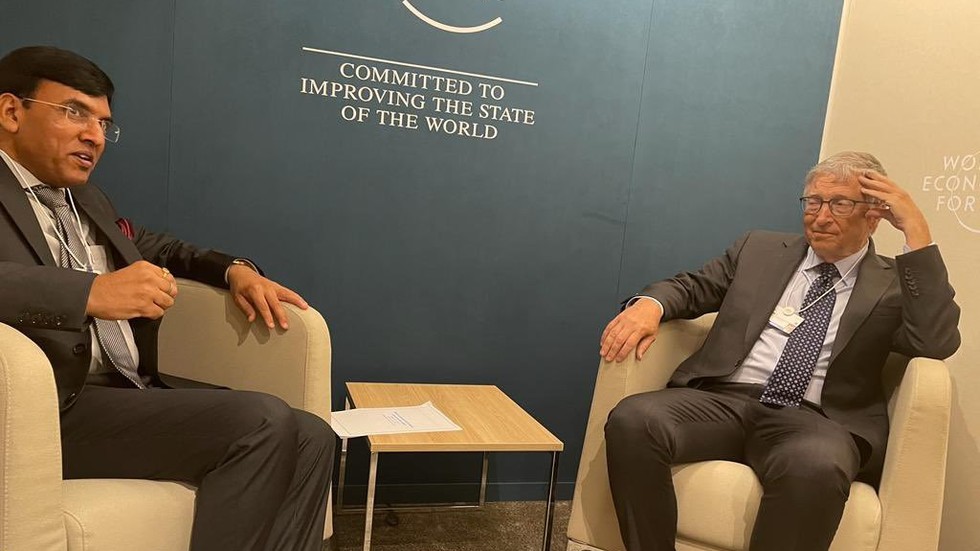 India has ‘many lessons to offer’ on large-scale pandemic management, the billionaire says

Microsoft co-founder and WHO mega-donor Bill Gates said it was great to exchange perspectives on global healthcare issues with India’s Minister of Health Mansukh Mandaviya during their meeting on the sidelines of the World Economic Forum in Davos, Switzerland earlier this week.

“India’s success with the vaccination drive and the use of technology to drive health outcomes at scale offers many lessons for the world,” the billionaire tweeted on Saturday in response to Mandaviya’s earlier tweet.

According to India’s top health official, he and Gates discussed a wide range of topics in Davos, from “disease control management” to the “creation of mRNA regional hubs,” as well as the development of affordable and high quality diagnostics and medical devices.

It was great to meet Dr @mansukhmandviya and exchange perspectives on global health. India’s success with the vaccination drive and the use of technology to drive health outcomes at scale offers many lessons for the world.

With an estimated 88 percent of India’s adult population fully vaccinated against Covid-19 as of Saturday, Mandaviya said Gates had noted India’s pandemic management success and “mammoth vaccination efforts.” In its effort to inoculate a population of 1.38 billion, New Delhi mostly relied on AstraZeneca’s Covishield and the domestically developed Covaxin, as well as small batches of Russia’s Sputnik.


Bill Gates has been at a leading figure in the global vaccination effort since the start of the Covid-19 pandemic. Though not a doctor, his views have gained added weight due to the Gates Foundation’s role as a major donor to the World Health Organization (WHO). It also invests billions in the development and distribution of vaccines.

The college dropout-turned-software-billionaire also attracted scrutiny over his 2015 TED Talk in which he warned of an “inevitable” global pandemic. Earlier this month, he published a book titled ‘How to Prevent the Next Pandemic’, which was praised by WHO chief Tedros Adhanom Ghebreyesus. He is also pushing for the creation of a Global Epidemic Response and Mobilization (GERM) team with an annual budget of at least $1 billion that would plan for future pandemics.