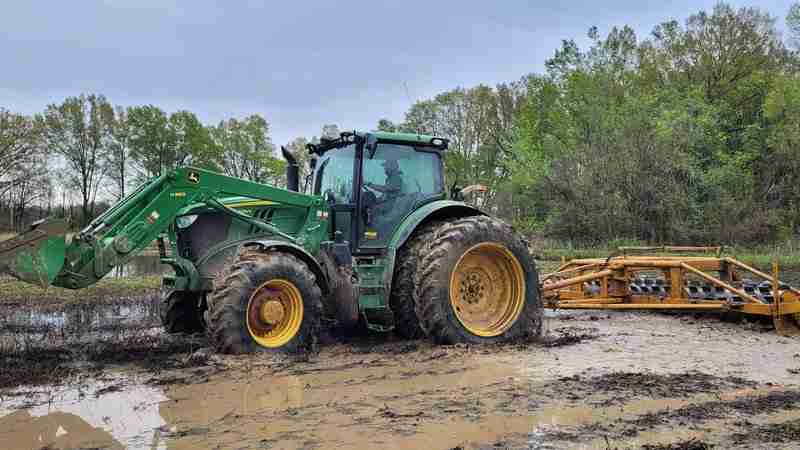 POCAHONTAS — The only thing people are breaking out the shotguns for may be turkey, but that doesn’t mean Arkansas Game and Fish staff aren’t hard at work laying the groundwork for next year’s duck season on public hunting areas and waterfowl rest areas. It’s planting season for most farmers, and the same holds true for land managers looking to put more food on the table for next year’s migration in the state’s 8,800 acres of intensively managed moist soil habitat.

Instead of turning dirt to produce corn, milo or millet, biologists and technicians throughout the state have been behind the wheels of tractors working just as intensively to stimulate native vegetation that will provide a variety of different foods throughout the wintering period for most waterfowl.

“Many hunters think moist-soil units are just areas where we let weeds grow,” Jason “Buck” Jackson, the biologist who oversees the AGFC’s wetland habitat program for waterfowl, said. “But we’re working just as hard to grow specific types of native vegetation as many farmers are to produce agricultural crops. Our moist-soil program is essentially an 8,800-acre farming operation, most of which is on land that wasn’t conducive to farming for agricultural crops.”

While duck season is still more than 260 days away, Jackson and a handful of technicians and staff on WMAs throughout Arkansas are busy right now running large tractors with cleated rollers over flooded fields to prepare moist-soil units for next year’s crop. The rollers chew up remaining debris from last year’s plants and incorporate the organic matter into the soil for additional decomposition and uptake for this year’s food-producing plants.

“It also stimulates the seeds remaining in the soil that the waterfowl didn’t find last season,” Jackson said. “Ideally, you want to turn the field into a slurry that has the consistency of brownie mix. It’s wet, sloppy work that can go sideways in a hurry if you don’t have the right equipment, but the work we do now will pay off tenfold later in the season as long as we manage water properly throughout the year.”

Jackson explains that many preferred plant species will grow naturally if given the right conditions, which includes the field being flooded and drained at the right time. The plants need a good start, then they need to slow down to build a good base that will support the large amounts of seed managers want, periodic irrigation throughout the year also will stimulate the plants to continue the process.

“We also take soil samples at the beginning of the year to determine if we need to add certain nutrients to give our moist-soil plants the best start possible,” Jackson said. “Yearly soil samples may seem like overkill, but when you’re flooding with runoff and water that’s pumped from river systems, you never know exactly what sediments and nutrients are coming and going on the land.”

Jackson’s skill in land management requires a unique hybrid of biology, engineering, agriculture and old-fashioned, get-your-hands dirty knowledge that comes from a lifetime of work advising and managing land for private duck leases and spending hundreds of hours each year trapping beavers, hunting and working on the land not only to understand the science of waterfowl management, but also the real-world application of that science. He and Luke Naylor, who heads up the AGFC waterfowl program, have worked in lockstep with other experts, such as Rob Willey, AGFC habitat program coordinator, during much of the greentree reservoir planning to find a solution to some of the most daunting challenges the AGFC’s waterfowl hunting areas have faced in the history of the agency.

Admittedly, looking over a moist-soil unit at the beginning of October may seem a bit uninspiring when compared to a monoculture of rice. Jackson, however, sees all the specific types of plants laden with food. The native grasses found in an intensively managed moist-soil unit hold more energy for ducks than harvested rice. It also contains a variety of seed types, invertebrates and other nutrition sources ducks don’t get in flooded agricultural fields.

“If you go to a Chinese-food buffet,” Jackson said. “Are you going to go and just eat egg rolls, or are you going to fill your plate with a variety of foods to enjoy? That moist-soil unit is a buffet that meets way more nutrition requirements for ducks and geese than those fields of flooded waste grain. And it’s going to offer food throughout the winter, where a lot of that agricultural field will offer a quick flush of food when it’s flooded, then be gone or rotted within a month or so. We’re producing food that will be available throughout the wintering period to attract ducks for hunters and give ducks the food they need for their migration back to nest and make more ducks for the future.”