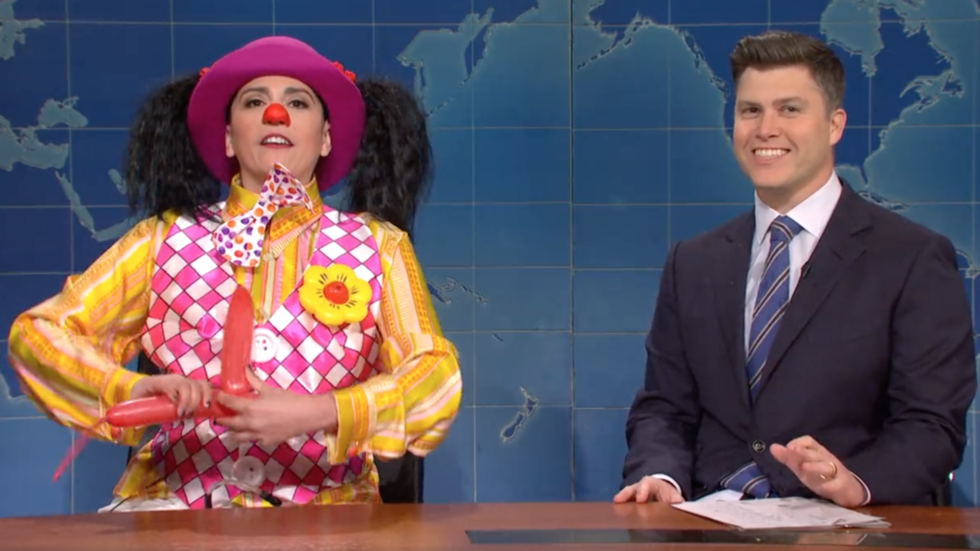 The latest episode of NBC’s ‘SNL’ has left many viewers cringing over a segment featuring a character named Goober the Clown detailing her experience of getting a “clown abortion” at 23.

“Did you know that one in three clowns will have an abortion in her lifetime?” comedian Cecily Strong asked during the show’s Weekend Update segment while wearing a clown costume. The sketch was meant to focus on new Texas law, which effectively bans abortions after six weeks.

Strong went on to list some abortion facts and describe how difficult it is to talk about while occasionally stopping for some humor, like slapping on a goofy pair of glasses.

“I need you to laugh so hard, like the way I laughed when the doctor asked if I got pregnant on my way over to the clinic because I wasn’t very far along,” she later tells cast member Colin Jost. “Not like a funny-haha joke, but like, in a funny, you’re not an awful person and your life isn’t over joke. A-honka honka!”EditDelete

While the segment’s political target was clear, many were left scratching their heads trying to find the humor in the abortion-centered segment, with conservative pundits pointing to the bizarre bit as the latest sign of degradation for the increasingly political satire series.

“The ratings could be the worst they’ve ever had but this will guarantee a reward of another five seasons for SNL. That’s how the ‘entertainment’ industry works,” talk show host Larry O’Connor tweeted in reaction.

Remember when SNL was funny? There’s a reason their ratings are tanking … people used to watch to laugh. For a release. They’re not watching so they can listen to yet another political diatribe on abortion. Even from a clown. 🙄 https://t.co/1fvJ3Cr5gM

Others, however, praised the segment for daring to tackle the subject of abortion head-on, albeit through a clown named Goober on a half hour sketch comedy show.

‘Saturday Night Live’ also unveiled a fresh Donald Trump impression over the weekend, with James Austin Johnson jumping into a role primarily filled by actor Alec Baldwin in the past. Baldwin has been cooperating with authorities while they investigate the death of Halyna Hutchins, a cinematographer shot and killed by the actor on a New Mexico set last month during a rehearsal of a scene with what was supposed to be a ‘cold’ gun.