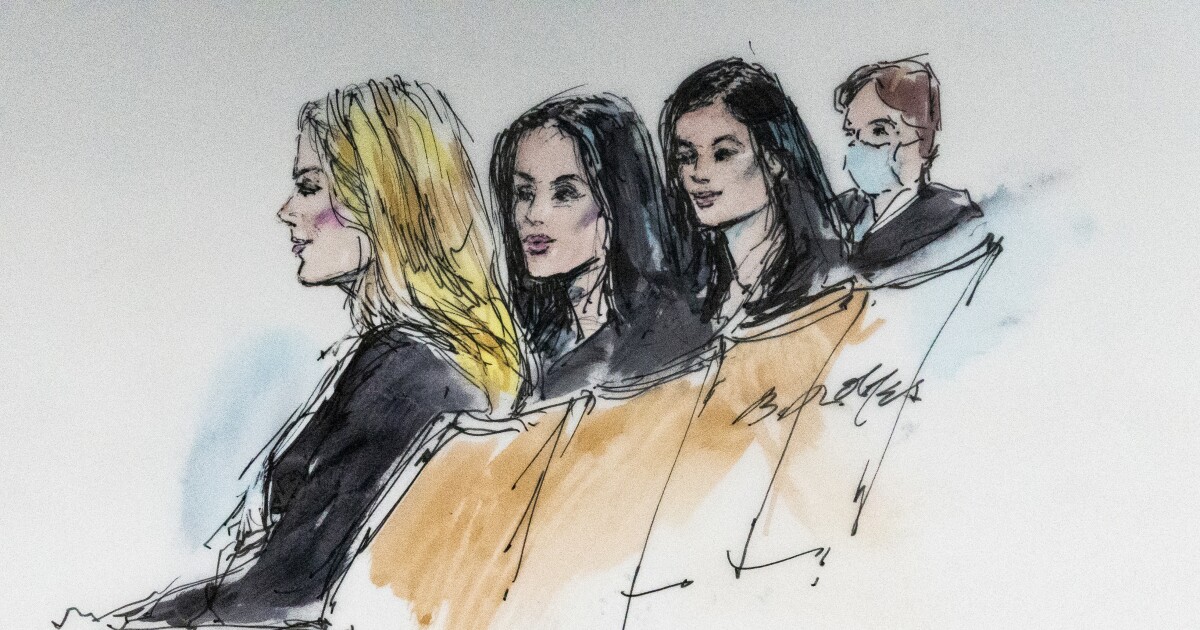 The infamous Kardashian family is subjected to a nonstop barrage of questions on a daily basis. Last week, the inquiry made its way to a courtroom when they were called to testify in model Blac Chyna’s tortious interference and defamation lawsuit against them.

As the Los Angeles trial goes into its second week, their testimonies have shed more light on the inner workings of the TV dynasty, which has already been in public for decades on television and on social media.

“Momager” Kris Jenner and daughters Kim Kardashian, Khloé Kardashian and Kylie Jenner, as well as Kris Jenner’s boyfriend Corey Gamble and a number of executives at the E! network, have taken the witness stand during the trial.

Chyna alleges that they schemed against her after she fell out with former fiancé and co-star Rob Kardashian, Kris Jenner’s son with late O.J. Simpson defense attorney, Robert Kardashian.

In a $100-million lawsuit filed in 2017, Chyna, real name Angela White, accused them of conspiring to end the couple’s docuseries “Rob & Chyna” — a 2016 spinoff of the family’s wildly popular reality series “Keeping Up With the Kardashians” — and ruin her career after it had already been renewed for a second season.

Chyna alleges that the family defamed her and interfered with contracts and accuses Kris Jenner, an executive producer on “Rob & Chyna,” of being a ringleader who used her daughters in a campaign to defame Chyna as abusive to her son.

Much of the questioning so far has hinged on a Dec. 14, 2016, celebration-turned-altercation between Chyna and Rob Kardashian that they both agreed permanently damaged their relationship. Its aftermath led to Chyna’s allegations that the family tried to end the show, but the Kardashians’ defense attorney argued that the show was dropped because the couple — whose docuseries hinges on their relationship — broke up after the fight.

“There is no ‘Rob & Chyna’ show if there is no Rob and Chyna,” Michael G. Rhodes said in his opening statement.

Here are excerpts from each of their testimonies so far, according to the Associated Press (unless otherwise noted).

Blac Chyna took the stand late Tuesday and Wednesday, but her attorney later asked for part of that testimony to be thrown out after the Kardashians’ lawyer presented the jury with a nude photo of the “Love & Hip Hop: Hollywood” alum. Chyna said she was triggered by the surprise photo, and her legal team later requested that she be allowed to take the stand again later.

Before that, Chyna testified that she stood behind Rob Kardashian with a phone cord and wrapped it around his neck and also grabbed a gun and pointed it at him during their argument.

“I smashed a gingerbread house because I was really upset. Then I damaged a TV.”

Later, she said, he was playing video games and ignoring her when she wrapped the cord around his neck: “I came up behind him, doing that jokingly,” she testified, “to get his attention.”

“He was already messing with it [a gun], that’s why I grabbed it, I was being funny while he was on FaceTime with his friends.”

On whether the trial is a publicity stunt: “No, not at all,” she said, and disagreed that her career has benefitted from the attention garnered by it. “ It’s actually been very negative.”

“The Kardashians” star Kris Jenner took the stand last Thursday and Friday and was asked to elaborate on an emergency call she received from her son the morning of Dec. 15, 2016, as well as her assessment of the couple’s relationship.

“I just wanted my son to be happy. They had a rocky relationship from the start, and I just wanted really a win for them,” Jenner said.

On why she didn’t go to the police after the alleged attack: “I wasn’t that concerned. There were all kinds of things going on. There was just a lot of drama, which I’m used to in my family.”

“We didn’t put Chyna on the show and give her this fabulous life to be taken away,” she said. “We created other opportunities. I was hopeful that it would be OK. That’s why I didn’t call (the police).”

“While Rob’s situation was going on, Kim had just been dealing with Paris,” she said. “He had a gun put at his head, and [Kim] was held at gunpoint and thrown into a bathtub. That’s a lot to take as a mother.”

Kylie Jenner testified Monday that she expressed concerns to her brother about dating Blac Chyna because she had heard that Chyna had a tendency to abuse drugs and alcohol and become violent. She also testified that she got a glimpse of that herself.

Jenner, who was a teenager at the time, had previously dated Chyna’s ex, rapper Tyga, who has a son with Chyna. Jenner said that Rob Kardashian didn’t heed her warnings. She also said that she didn’t believe Chyna’s love was genuine.

“I felt it was my duty to express my concerns, but ultimately, it was up to him.”

On why she felt Chyna had threatened her: “From what I remember, she sent me a bunch of devil emojis and said something like ’counting down the days’ until she could beat me or something. I didn’t report it, because I assumed they were empty threats.”

“I felt like me dating the father of her child had something to do with it, and maybe she was out with my brother for other reasons.

“I was happy for my brother at the time, but just curious how it would go,” she said.

When she testified on Tuesday, reality TV star Khloé Kardashian said that she also expressed concern for her brother’s safety and the credibility of the family’s brand at the time, according to People.

On sending an email about the couple to Jeff Olde, vice president of development and programming at E!: “I was not comfortable with the abuse that was happening.”

“I wasn’t trying to cancel anything. I was considering not encouraging such volatile behavior between my brother and Chyna,” Kardashian said.

“We feel strongly about a lot of things; that doesn’t mean anyone is going to listen to us. We were considering not being a part of such toxicity. We were putting our concerns in writing so they were aware of the volatile relationship.”

Testifying after Khloé Kardashian on Tuesday, beauty mogul Kim Kardashian repeatedly said that she didn’t remember when asked questions. What she did reveal, however, offered insight into the most famous sister in the family.

“I don’t remember text messages that I sent this morning,” Kardashian said.

“I will not go into a toxic work environment. On my own show, I have the power to do that.”

On a specific text message: “This is clearly voice dictated, as is everything I text that’s so long, and it’s sometimes rendering ‘our’ as ‘her.’ I would never refer to her show as ‘her’ show, I would say ‘Rob’s show’ since it’s a spinoff of ‘Keeping Up With the Kardashians.’”

‘I have a right, as a cast member, to say we really need a break,’

On where she saw injuries on Rob Kardashian after the fight: “I just remember in that moment him being super emotional, and it’s really all such a blur. I remember him being really red, but I don’t remember anything very specific, just him looking puffy and red.”

On repeatedly being asked if she directed her sisters to tell E! executives and producers about the alleged attack: “I know you want my answer to change. You’ve asked the same question like four times, I wish I had a better answer for you, but I just don’t remember.”

“I do not control my sisters’ lives, and I do not have conversations with them before they send emails.”

Kris Jenner’s longtime boyfriend, Corey Gamble, is the only third-party eyewitness in the case. He testified Tuesday and Wednesday that on the morning of Dec. 15, 2016, he overheard Chyna threatening to kill Rob Kardashian and screaming obscenities at him when Kris Jenner put the emergency call she received from the couple on speaker. And when he drove over to their house moments later, he said he witnessed Chyna attempting to assault Rob Kardashian in multiple scenarios

On the what he overheard from the phone call Jenner received from the couple, via Buzzfeed: “I could just hear Chyna screaming, ‘F— you. I’m going to kill you, fat motherf—,’ … in anger.”

What happened when he arrived at their home: “She was trying to hit him,” Gamble said. “I was just in the middle.”

He also testified that Chyna yelled about hating Rob Kardashian and allegedly said, “I wouldn’t like this fat f— if he wasn’t part of that family.”

According to AP, Gamble said he witnessed Chyna punch Rob Kardashian and whip him with a phone charger cord.

On their fight: “I said that she attacked him. What I saw is what I saw.”

“By the time she got to him, she started hitting him. I was able to get in the middle of them two. I even got hit two or three times. And I was able to get him away, get them separated. I told him to get his keys and his wallet and get the hell out of there.”

“Life don’t happen in slow motion, things happen fast and quick; it was a hostile situation. Anything you do to slow it down don’t change the fact that the attack happened.”

Rob Kardashian, who has mostly remained off-camera during his family’s rise to fame, offered emotional and contentious testimony during his appearance on the witness stand late Wednesday, at times raising his voice during the proceedings. He said that his relationship with Chyna began at the “weakest, worst point” of his life, that it was “toxic” from the start and that she allegedly beat him at least five times during the year they were together.

What he testified happened: “She strangled me, she put a gun to my head twice, she was on cocaine and alcohol.”

On their relationship: “Strangling someone, beating someone, that’s not a family,” he said. “That’s not love to me.”