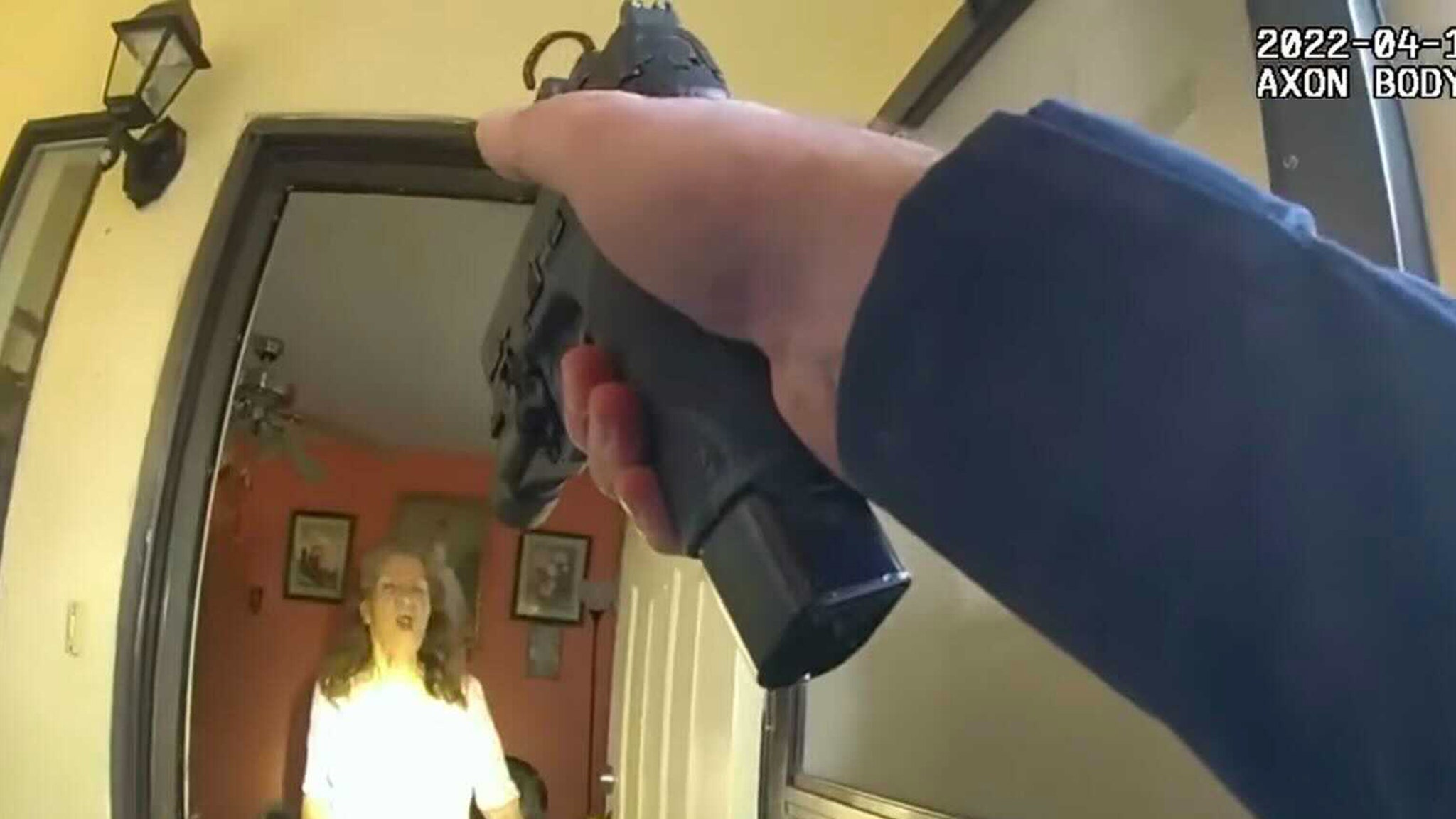 He screams at her in English for 40 seconds — but the grandmother only spoke Spanish.

Police in New Mexico have released body cam footage of one of their officers shooting dead a 75-year-old dementia sufferer.

The harrowing video shows the moment grandmother Amelia Baca was gunned down on her own doorstep, apparently for refusing to drop two knives she was carrying.

The officer screamed at her for exactly 40 seconds before firing two rounds into her chest, telling her 16 times — in English — to “drop the f–king knives”. But according to her family, the grandmother only spoke Spanish.

The incident happened on April 16 in Las Cruces; police had initially released a produced video featuring stills and a voiceover narrative on April 22, but the full unedited video was not released until Tuesday, as part of a public records request.

According to police, they received a 911 call from the address on Fir Avenue, from a woman claiming her 75-year-old mother, who suffers from dementia, was armed with a knife and had threatened to kill her; she said she was hiding in a bedroom with her husband, small child, and another daughter.

The caller had requested both an ambulance and police officer; the dispatcher assured her both were on the way.

The body cam shows the officer arriving and identifying himself to the two daughters, who emerge from the home and don’t seem to be in any terrible rush, despite the knife-wielding grandmother being just feet behind them:

“Please be very careful with her,” granddaughter Albitar Inoh tells the officer as she calmly passes him.

But the officer is not as calm as the daughters. He immediately pulls his gun on the elderly woman, repeatedly screaming at her “Drop the f–king knife! Do it Now!”

“No no! She’s actually safe!” her frantic daughters can be heard telling the officer, but he keeps the gun trained on the septuagenarian.

Responding in Spanish the whole time, Baca moves both knives to one hand and appears to motion inside the house; but she then takes a single step toward the officer, and that is her final mistake. The officer shoots twice, as the daughters scream in terror. Baca was pronounced dead at the scene.

The officer has yet to be identified. He was placed on administrative leave, pending an investigation.

According to the earlier edited video released by police, he is a nine-year veteran of the force, who has 70 hours of crisis intervention training under his belt.

She said that while her grandmother had refused to put down the knives, she never suspected she would hurt anyone.

Chief Miguel Dominguez meanwhile described the incident as “a tragedy”.

“No family wants to be put in this position. No officer wants to have to face that situation,” he said.

“With lethal force, time and distance dictates most of it. The dynamics of this call were very close proximity,” he explained. “She was about four or five feet away from the officers as the video depicts. (It was) closing distance with deadly weapons in her hand. Plus, the officer (had) knowledge of the other people inside the residence having their lives threatened and being barricaded themselves, including children.”

“Time and distance buys us the opportunity to have other options. There were other officers there. Had we had a little bit more time, we would have maybe gotten another taser or less lethal option available,” he added.

“But because of the distance and the way it played out, the officer really had limited options at that point.”

Had he not used lethal force, Chief Dominguez insisted: “The officer’s safety was definitely at risk.”

The ACLU meanwhile have called for a external investigation into what the Baca family lawyers described as a “murder”.