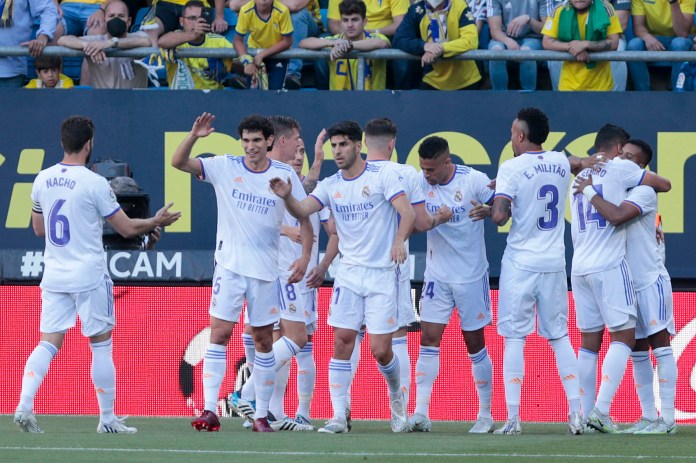 With Real Mallorca securing a dramatic win over Rayo Vallecano, only a victory at the Nuevo Mirandilla would have kept Cadiz out of the relegation zone, but Lunin – standing in for Thibaut Courtois – frustrated them.

Starting in place of Vinicius Junior for the champions, Rodrygo embarked on a mazy run that his compatriot would have been proud of before prodding the ball to Mariano for a fifth-minute tap-in.

That lead was almost wiped out soon after, but Nacho Fernandez got back to make a vital interception before Lucas Perez could pounce on Alvaro Negredo’s pass.

La Liga: Mariano Diaz and Sobrino amongst the goals

Lunin’s fine save then denied Oussama Idrissi an equaliser, but the goalkeeper was helpless a few moments later as Sobrino smashed in off the crossbar from 16 yards following a weak Eder Militao clearance.

It remained a similarly open contest after the break and Cadiz wasted a glorious chance to take the lead, with Lunin saving Negredo’s penalty after he had clumsily fouled the Madrid youth product.

Lunin acrobatically saved a goal-bound Negredo header soon after, with the Ukrainian’s heroics enough to earn Madrid a point.

The fact Madrid have already wrapped up the title meant LaLiga’s focus was more on their hosts here, and to be fair to Cadiz, they certainly put on a show.

Even with the draw, they looked to be going two points clear of the bottom three – but Mallorca got their winner over Rayo in the second minute of stoppage time, putting them above Cadiz thanks to their superior head-to-head record.

Cadiz drop into the bottom three. They face Deportivo Alaves – whose relegation was confirmed with defeat to Levante on Sunday – next week, while Mallorca go to Osasuna as the relegation drama extends to the final weekend.