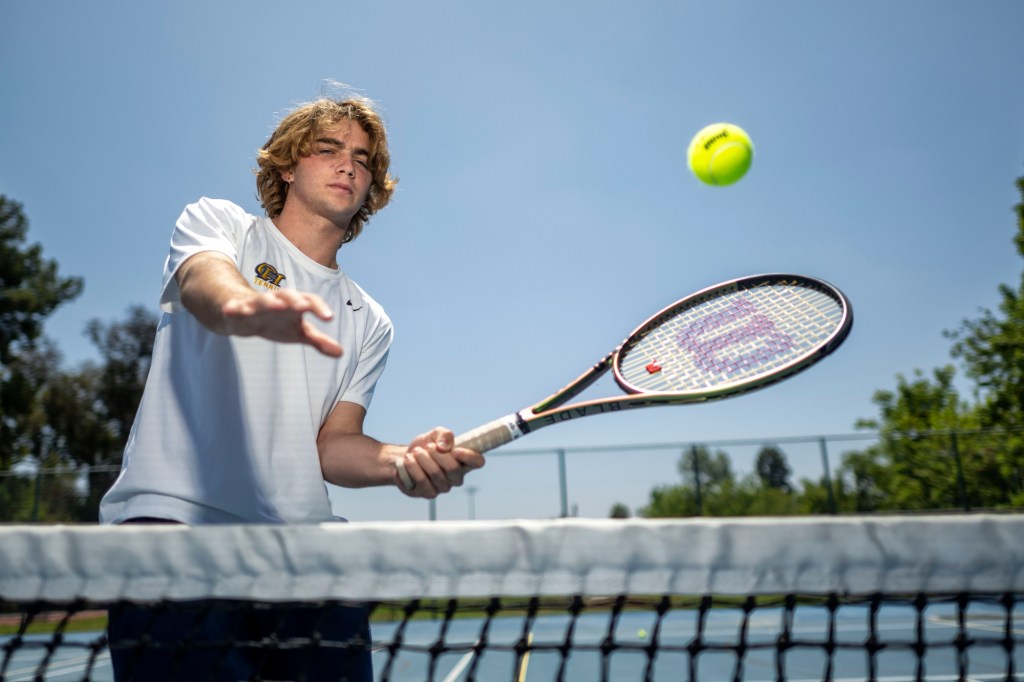 It’s rare to see a freshman (or rookie) be recognized as the best player on his or her team, let alone the best player in a league or region. But Cassius Chinlund showed why he’s one of the best in Southern California when he made it to the CIF Southern Section singles title match at just 15 years old.

It’s also rare to see a freshman be named an All-American. Chinlund was among the 40 high school boys tennis players in the United States selected to the National High School Tennis All-American team. He was one of two freshmen to be selected.

It’s why Chinlund is the 2022 Daily News boys tennis player of the year.

“I was surprised when I learned about the All-American team. I’m honored,” Chinlund said. “It’s always been one of my goals to be an All-American, but I didn’t expect it to happen now.”

“He stays back, he comes in, he can volley. He has good feel at the net and a great baseline game,” Kuechel said.

Chinlund, a left-handed player, went 31-0 this season and won the Gold Coast League singles title before embarking on an outstanding postseason run. He beat Crean Lutheran senior Daniel Choi in straight sets (6-4, 6-3) in the opening round. He then took down Air Force-bound AJ Moore of Portola – a five-star prospect on Tennis Recruiting Network – in three sets.

“I never expected to get that far,” Chinlund said. “But I figured I had nothing to lose up against guys that were juniors and seniors.”

Chinlund took down his third straight upperclassman in the semifinals, beating five-star-rated junior Eduardo Gonzalez of Palm Desert High in straight sets before falling to another five-star recruit in Andy Nguyen of Millikan in the final (6-3, 6-1).

“It was a great experience,” Chinlund said of his stellar season.

Chinlund says he doesn’t watch much tennis, but he certainly watches Rafael Nadal (also a left-handed player) when he does. Nadal just won his 14th French Open and his 22nd Grand Slam title this past weekend.

The 15-year old freshman has a long way to go to catch the Spaniard, but has aspirations to play high-level collegiate tennis and become a professional tennis player one day.

For now, he plans to travel to New York, Florida and Maryland this summer for national tennis tournaments.

”I’ve coached a long time. I’ve seen a lot of players,” Kuechel said. “He’s beyond his years. He’s a great player, and a great student.”

Chinlund, who holds a 3.8 grade-point average, is already a five-star, Blue Chip recruit, according to Tennis Recruiting Network, and is ranked the 12th-best prospect in the 2025 class nationally. He’s ranked No. 2 in California.

Sebastian, an Army commit, earned the No. 1 seed in the sectional and won two matches in the CIF-SS championships. Sebastian was named the 2022 Marmonte League MVP.

Kodumuir had a stellar campaign as a freshman, earning his way to the CIF-SS championships and winning one match before falling to eventual champion Andy Nguyen. Kodumuir, the 35th-ranked freshman in the state by the Tennis Recruiting Network, earned All-Pacific League honors.

Radaoui – the Pacific League champion – took down the Foothill League champion from West Ranch, Jared Admiraal, before winning one more sectional match to compete in the CIF-SS championship tournament where he fell in the opening round.

Koval, the 37th-ranked 2024 prospect in the state, won the Coastal Canyon League individual title and was named league MVP. Koval reached the CIF-SS championship event at Whittier Narrows, but lost in the second round.

Fatu was the third-place finisher in the LA City Section singles championships. He fell in the semifinal to Palisades’ Jex Frankel, but won the third-place match over his Granada Hills teammate Rocco Melendez, 6-7(4), 6-0, 6-1.

This duo were the Marmonte League doubles champions and reached the CIF-SS doubles semifinals after taking down doubles teams from Cerritos and Woodbridge in the second round and quarterfinals, respectively.

Kennedy and Kurgan were the Mission League runner-up doubles team and made it to the second round of the CIF-SS doubles championships.