Brisbane finished a dismal 14th on the ladder last year while Souths made the grand final. Those fortunes have been reversed in 2022, with last night’s win vaulting Brisbane ahead of Souths and into sixth spot on the ladder.

Souths will drop out of the top eight after this round if two of either the Roosters, Sea Eagles, Dragons or Warriors can record victories.

“This wasn’t just a win, this was a demolition,” Geyer said on Triple M.

“Adam Reynolds my goodness, rubs salt into his old team’s wounds by saying ‘why did you let me go?’ 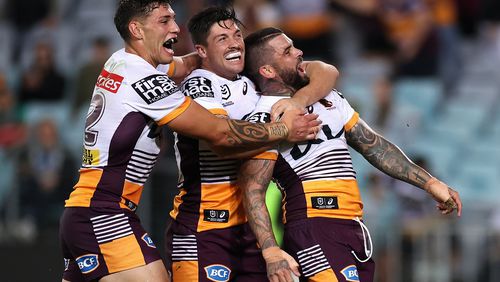 “Why? Scoring a try and setting up two.”

Geyer said those who made the call not to meet Reynolds’ contract demands should be on the way out.

“As for South Sydney, (it is) the worst decision they have ever made in their history,” Geyer said.

“I just cannot believe it.

“Whoever made that decision, you should walk away from the club right now and you should sack yourself.”