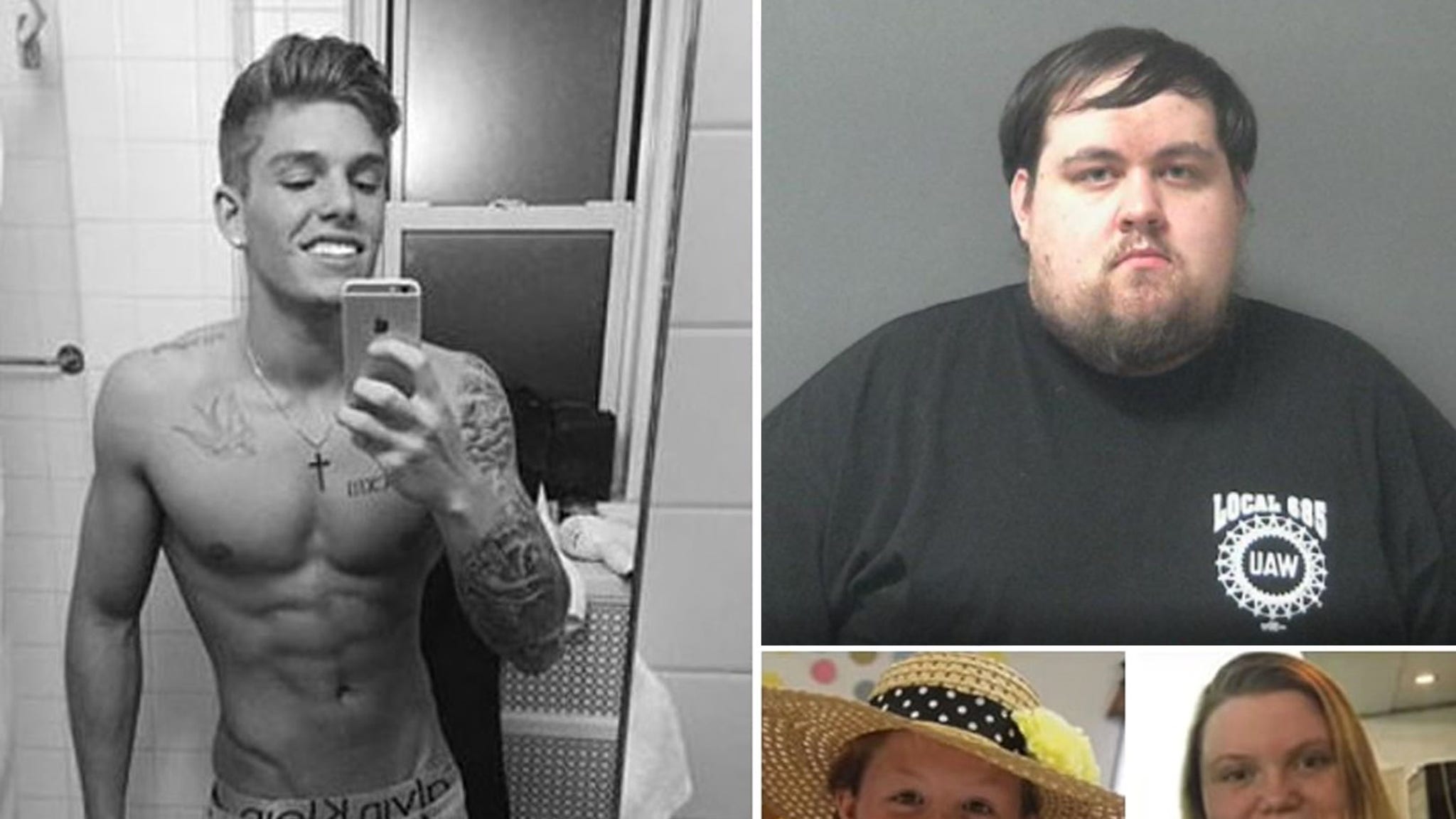 Five years on, nobody has been charged.

A man linked to the fake Instagram profile used to catfish two Indiana teens has admitted contacting them the night before they were killed, leaked police transcripts show — but he is not a suspect in their murder.

According to court documents, police believe the Instagram profile “Anthony Shots” was used by 27-year-old Kegan Anthony Kline (pictured, above right) to solicit explicit pictures from underage females on social media. They also believe someone using the Anthony Shots account was the last to contact 14-year-old Liberty German the night before she and 13-year-old Abigail Williams were found murdered on Valentines Day of 2017.

But more than five years on, nobody has been arrested or charged in the killings.

On Friday, a police transcript obtained by the Murder Sheet podcast — which Indiana State Police insists they did not release — shows Kline admitted talking to German while she was at a sleepover, the night before she disappeared.

The interview took place on August 19, 2020, when Kline was arrested and charged with 30 felonies, including child exploitation, possession of child pornography, obstruction of justice and synthetic identity deception… but not with anything, ISP are keen to point out, to do with the Delphi murders.

The 194-page interview, shared by Fox59, shows that they did question him extensively about the girls however, as they pressed him on the allegation that the fake profile he created was the last to be in contact with them.

“I know you say you don’t remember a girl that you ever talked to but I know you remember Liberty German?” the officer asks. “…you know you talked to her and you admitted to talking to her?”

Kline initially denies it and says he thought he had talked to one of her friends.

“You admitted you talked to her… for a few hours at a sleepover and then you blocked her because she was annoying you, remember?”

“You remember that?” the officer asks.

Throughout the interview, Kline had insisted he did not remember specifically talking to Liberty, as he had used the Anthony Shots profile to talk to multiple girls.

But further into the transcript, when the officers claim that Anthony Shots had arranged to meet Liberty at the Delphi bridge the day she died, he repeatedly insists that this is a lie.

The officers tell him it is a fact that one of the girls in contact with the account asked Anthony Shots if he had heard what happened to Liberty, and Shots replied: “OMG what happened” and “Yeah, we were supposed to meet but she never showed up.”

Kline insists he never wrote that message. The officer tells Kline he genuinely believes he did not murder either girl. “But you need to tell me who was logging in to these accounts,” he asks.

Again, Kline insists he does not know.

Throughout the interview, Kline claims multiple people had access to the Anthony Shots account — including his father.

Investigators believe at least two people used it, based on the different syntax used in messages.

At the end of the interview, the officers remind Kline that he twice failed a polygraph test when asked if he knew who killed the teens, and say he deleted his search history shortly afterward.

“Why would you after you failed the polygraph about knowing about the Delphi investigation, come home, delete your Snapchat and your Instagram, which you used to communicate with Libby and then you searched, ‘how long does D.N.A last?’ Why would you do that?” the detective asked.

Kline claimed he’d probably searched that because he’d given a sample to police.

In a separate jailhouse interview with HLN in February of this year, journalist Barbara McDonald said Kline admitted setting up the Anthony Shots profile to solicit nude images from underage girls, but insisted he was not trying to meet any of those girls in real life.

“I don’t really know. I was just lonely. You know what I mean? Just talking to people. I don’t know why I did it really,” he told her when asked why he set it up. He also insisted he had no recollection of talking to Liberty.

In that interview, per Fox59, he told McDonald that he was sure he was not going to be charged with the murders, and that investigators suspected his father was responsible.

“Cause when I first got arrested, they told me that they knew it was my dad and… if I tell ’em all my charges will be dropped,” he told her.

He told McDonald that his father was abusive, and once held guns on him and his mother. He claimed his dad liked “younger women” and once boasted he slept with a 17-year-old when Kline was 20.

Kline is due back in court on April 14.

On Monday, Indiana State Police made an unusual appeal to the public, posting several pictures of a male model whose pictures they believe were used to lure two young teen girls to their deaths.

They stipulated in a release that the man pictured, whom they described as a “known male model”, was not a person of interest in the case. But despite knowing who he was, they never let him know his photographs were about to be used in a murder investigation.

TooFab spoke to the model – who ironically enough is now a police officer himself – and he is not happy.

The unsolved homicide case involves the 2017 murders of 14-year-old Liberty German and 13-year-old Abigail Williams, whose bodies were discovered on Valentine’s Day off a hiking trail near Monon High Bridge just outside their hometown of Delphi – one day after they vanished while walking the trail.

During the initial investigation, police released two grainy photos of a suspect walking on the abandoned railroad bridge, as well as sketches based on a video taken from German’s cellphone. But nobody was ever arrested.

Then on Monday, almost five years after the murders, Indiana police claimed they had uncovered an online profile they believe may be connected to the case, named anthony_shots.

“This profile was being used from 2016 to 2017 on social media applications, including but not limited to, Snapchat and Instagram,” they said in a release. “The fictitious anthony_shots profile used images of a known male model and portrayed himself as being extremely wealthy and owning numerous sports cars.”

“The creator of the fictitious profile used this information while communicating with juvenile females to solicit nude images, obtain their addresses, and attempt to meet them. Pictured below, you’ll see images of the known male model and images the fictitious anthony_shots profile sent to underage females.”

Included with the release were seven selfies taken by the model, as well as a number of screengrabs posted by the account, including photos of a garage filled with luxury sports cars, and an online shopping baskets from Gucci and Louis Vuitton filled with thousands of dollars of designer wear.

They appealed for anyone who met, attempted to meet or had any online communication with anthony_shots to contact their tipline immediately.

What police didn’t do, however, was contact the model in the pictures himself, to let him know they were about to use his images as part of a murder investigation.

The former model, Vincent Kowalski, is now a police officer in Alaska.

“Someone sent me a screenshot of the YouTube video they did… I was like ‘There’s no way that’s real,” he told us.  “I was completely blown away.”

Officer Kowalski said his images have been used for years by catfishers; “Grindr, Kik, all of the dating websites. People use them trying to message girls,” he said.

He said he has contacted Instagram many times, but is merely told to block them. “They never get taken down,” he said.

Indeed, on his own Instagram account, Kowalski has warned people that he is not on any dating sites, and that he doesn’t accept friend requests from people he doesn’t know.

“If you think you have been talking to me through DMs you aren’t. You are talking to a fake,” he advised in one 2019 Insta post.

Despite being the most obvious person in the world to ask about his own pictures being catfished, Kowalski told TooFab that none of his police colleagues from Indiana ever reached out.

Now, thanks to tens of thousands of views and shares of the police release, he is now worried for his family’s safety.

“A lot of the headlines are somewhat vague,” he said. “When you google it my picture is the first thing you see. My face is blasted everywhere. People might think I had something to do with it.”

“I spoke to my wife about it… I just hope nobody crazy tries to contact my family.”

Kowalski, who has been on the force for four years, says he has no idea why Indiana police never gave him a heads up, or at least reached out for possible information on past catfishers.

“You would think so,” he said.

He said he even reached out to the tipline himself – but never heard back.

TooFab asked Indiana State Police Public Information Officer Sgt. Jeremy Piers if the “known male model” was made aware his pictures were being used as part of a murder investigation, but was told no further information was being released.

When asked if they had requested permission to use the pictures, he said they had “already been posted on social media,” so they didn’t need to.

The anthony_shots profile meanwhile is still live on Instagram — but set to private.