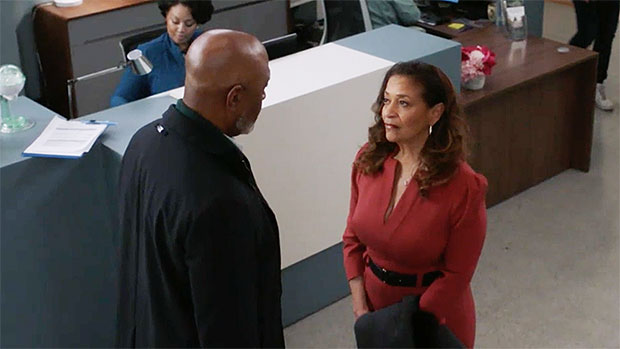 Richard accidentally got stoned during the May 12 episode of Grey’s Anatomy, but a startling admission by wife Catherine sobered him up pretty quickly. The episode started with Richard acting pretty aloof, but Meredith was quick to discover that he drunk a pot smoothie. So she handed all of her cases over to hunky Nick Marsh, and she kept an eye on Richard. During this babysitting session, Meredith revealed why she had to leave Seattle — it’s haunted by all the people who are no longer there (cough, Derek, cough). Even Richard agreed. “Everywhere you look,” he said, “there’s a memory of people who aren’t here anymore”. But he was referring to Ellis, not Adele.

Anyway, Meredith couldn’t keep an eye on Richard all day, so Amelia gave her a bit of reprieve, and she told Richard not to reset his sobriety count. Since he didn’t intend to get high and didn’t plan on doing it again, she said he should hold onto his 10-year achievement and keep going. Richard was happy to hear that, but he still couldn’t figure out why Catherine had pot smoothies in their refrigerator.

Eventually, Catherine got called by Meredith, and when she arrived to take Richard home, she admitted that her cancer has progressed — and the pot is for her pain.

The recap is developing…