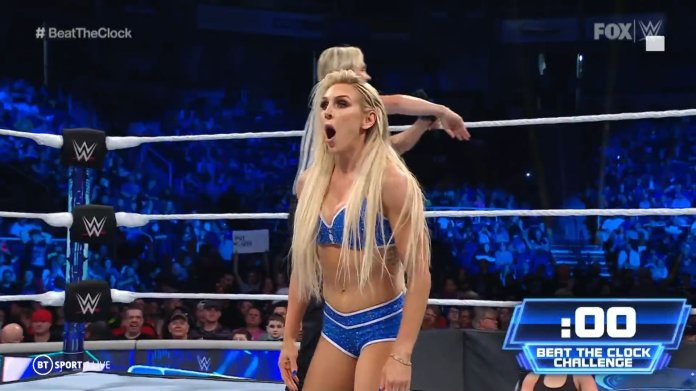 Charlotte Flair faces a defeat in the Beat The Clock Challenge: In the main event of Friday Night SmackDown, SmackDown Women’s Champion Charlotte Flair and Ronda Rousey competed in the “I Quit” Beat the Clock challenge. Ronda Rousey competed first against Shotzi. As soon as the bell rung, Shotzi escaped the ring to prevent Ronda from attacking her.

However, Rowdy Ronda Rousey caught Shotzi and made her submit to the ankle lock in 1 minute 41 seconds. Ronda Rousey defeated Shotzi to set a time for Charlotte to beat it. Later, Charlotte Flair and Aliyah competed in the ring to beat Ronda’s time. But Charlotte faced a loss after she couldn’t defeat the time set by Ronda Rousey.

With frustration on Charlotte’s Flair, she attacked Drew Gulak, who was in charge of ringing the bell. Charlotte blamed Drew Gulak for her loss and assaulted him. In the end, she smashed the ring bell on Gulak’s back.

Sheamus Revenges Ridge Holland’s loss: On the recent episode of Friday Night SmackDown, Xavier Woods and Ridge Holland went one-on-one in a singles match. Woods started the match with dominance to counter Holland. Both men engaged themselves in extreme battle, delivering big chops to the chest.

Holland took control over the match and dominated Woods. In the end, Ridge Holland tried to deliver the powerbomb, but Woods countered it and won the match with a roll-up pin. However, Sheamus couldn’t digest the loss and called Kofi Kingston for a match.

It was Kofi Kingston’s opportunity to defeat Sheamus, but he failed to do so. The match ended up in a loss for Kingston. Later, Holland attacked Xavier Woods on the sidelines and smashed him through the table.

Later, Natalya caught Sasha Banks in a sharpshooter. Later, Shayna Baszler slammed Naomi and destroyed her left arm stomping on her shoulder. A big statement from Natalya and Shayna Baszler.

Drew McIntyre Comes to Aid RK-Bro: On the recent episode of Friday Night SmackDown, RK-Bro and The Usos head to the ring for the official contract signing for their WrestleMania Backlash match for unifying the tag team titles. But the contract signing turned into a brawl, as both teams tried to disrespect each other.

However, the Undisputed Universal Champion Roman Reigns showed up on SmackDown, and the Usos took advantage of the distinction and attacked RK-Bro. Roman Reigns and The Usos held Riddle and tried to assault him.

But the Scottish Warrior came to aid RK-Bro, destroying the Usos and Roman Reigns. Drew McIntyre and Roman Reigns face off in the ring and McIntyre unleashes an attack on Reigns, forcing the Undisputed Universal Champion to retreat.

Ricochet defeats Shanky: The Intercontinental Champion Ricochet went one-on-one against the 7-foot tall Shanky alongside Jinder Mahal. Shanky started the match with almost domination. He delivered consecutive strikes to Ricochet and smashed him in the corner.

The giant tries to dominate the champion. However, the champion gets his momentum in the match. Although with a cheap shot from Jinder Mahal, Ricochet pinned Shanky with a roll-up pin to retain his Intercontinental Champion.

Madcap Moss strikes Corbin: In the latest edition of Happy Talk on Friday Night SmackDown, Corbin trashed talk about Madcap Moss and tried to destroy his first achievement, Andre The Giant Memorial Trophy. However, Madcap Moss disguised himself as a staff member to bring the trophy and attacked Corbin.

Later, both men were engaged on the top rope, where Sami took a shot at Drew McIntyre and delivered a sunset flip powerbomb. With McIntyre on the ground, Sami tries to take control of the match and delivers the Heluva kick to make his way out. But McIntyre caught the former Intercontinental Champion dragged him back in the ring.

The Scottish Warrior started his romance in the ring with consecutive strikes to Sami Zayn and once again, both men fight on the top rope. However, McIntyre delivered a superplex to the running Sami Zayn and ended the match with a Claymore. Finally, Drew McIntyre defeats Sami Zayn.