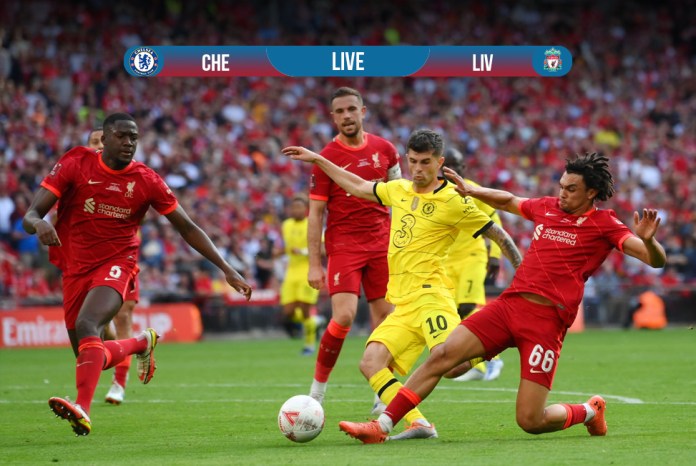 After a brief pause to regroup and take on drinks, we are back under way in the first half of extra-time!

SO CLOSE! Yet another moment of inspiration from Diaz sees the winger slip inside his defender to tee up a shot from the left side of the box. His curling effort just misses the far post, with Mendy beaten, and Chelsea hang on.

After a mostly frustrating shift up front, Lukaku is substituted by Tuchel; Ziyech comes on.

Thiago is back on his feet, following James’ crude tackle, but Liverpool essentially waste the resulting free-kick.

Receiving the ball from Thiago on the left edge of the Chelsea area, Diaz opts to curl an ambitious shot at the top-right corner, but his attempt clears the crossbar.

WIDE! Another chance is spurned by Pulisic, as James picks him out on the edge of the box, and he turns the ball wide of the near post with a low strike.

Liverpool make a mess of a corner from the right, but eventually force another to keep the pressure building on their opponents.

JUST WIDE! After Keita picks him out on the right side of the area with a low pass, Jota drags an angled effort past the far post, and Chelsea survive!

Alexander-Arnold covers across to cut out the cross of his fellow England full-back James, with Pulisic poised to pounce on the edge of the six-yard box. There is no doubt, Chelsea are a team transformed from the first period, and this final really could go either way.

CLOSE! Liverpool have regained the initiative here, as Diaz turns on the edge of the area and strikes a firm, low shot narrowly wide of the left post. Mendy was well beaten, but Chelsea survive!

Mane drives Liverpool forward, before the ball breaks to Alexander-Arnold in his familiar inside-right position. He curls in a deliciously inviting cross to the back post, where Robertson arrives unmarked, but his fellow full-back cannot connect cleanly and the ball dribbles wide.

OFF THE BAR! From a free-kick out on the right flank, an inswinging attempt from Alonso evades the gloves of Alisson and clips the top of the Liverpool crossbar! So close to a spectacular cup final goal!

SHARP STOP! A flying save from Alisson denies Pulisic the opening goal, as Chelsea flood forward in numbers, and the American forward turns Lukaku’s layoff towards goal. It’s been a quick start to the half from Chelsea!

Liverpool get us back under way at Wembley!

CLOSE! After Thiago flips the ball out to the left side of the area, Robertson then crosses towards the penalty spot, where Jota meets it with a volleyed effort, which sails wide of Mendy’s goal. Another good chance spurned, and somehow the game remains 0-0!

Liverpool are seeking to win both of England’s cup competitions in the same season for the first time since the treble-winning campaign of 2000-01. Meanwhile, if Chelsea were to lose, they would be the first team to fail in both the League and FA Cup finals since Middlesbrough in 1997.

Under pressure from Van Dijk, a chance for Lukaku to control the ball in the area and turn towards goal goes astray, following a straight throughball from midfield.

Having apparently traded places with Keita, who has drifted further out to the right as cover, Alexander-Arnold twice picks up the ball in central areas around 30 yards from goal, but sees both a shot and a cross cut out.

Konate positions himself well to block out Pulisic, who attempts a left-footed shot from an angle on the left side of the box. However, the American winger perhaps should have made more of the chance.

Unable to continue due to injury, Salah must be replaced before half-time; Jota comes on in his place.

Mohamed Salah is forced out of the #FACupFinal. Liverpool’s #UCLfinal vs. Real Madrid is two weeks from today 😳

Following his save at the feet of Alonso, a leg injury for Alisson sees him call for the game to be halted, and the Liverpool keeper will now receive medical attention.

SAVE! Diving low at the feet of Alonso deep into his area, Alisson smothers the wing-back’s shot, after Pulisic had picked his Chelsea colleague out with a perceptive pass from the edge of the box. Alonso just overran the ball, which allowed the goalkeeper to make the stop.

As a measure of their improvement over the past 10 minutes, Chelsea have increased their possession share to 44 per cent, and have finally had their first shot at goal – still trailing Liverpool’s tally of six.

JUST WIDE! After Mount cuts a low ball back from the right byline, Pulisic latches onto it, but can only steer his strike narrowly wide of the Liverpool goal. Chelsea are growing into the game, but the final remains goalless.

These clubs have met only once before in the FA Cup final, doing so in 2012, when Chelsea won 2-1. This is the Blues’ 16th appearance in the competition’s final compared to the Liverpool’s 15th.

Stretching at a ball running away from his control, Robertson fires an effort from just outside the box well over Mendy’s crossbar.

Mendy appears to have picked up an injury on his left foot, after clearing away under pressure from international team-mate Mane. However, after a short pause in the action, the game gets back under way.

Alonso drifts a free-kick from the right side of the area straight into the expectant gloves of Alisson, inside the goalkeeper’s six-yard box. Given Chelsea’s lack of opportunities so far, that was a waste.

Though the assistant’s flag is ultimately raised for offside, Lukaku holds the ball up well to play in Pulisic, who strikes a 20-yard shot just wide of the left post – Chelsea’s first atatcking move of note.

With 67 per cent of the ball so far, Liverpool’s intent has been quite plain in the opening stages, and a timid Chelsea seem ill-equipped to respond. They just cannot cope with Diaz on the left flank.

Mane releases Diaz on the left, but the latter rather selfishly shoots straight into a wall of yellow shirts. From the rebound, Alexander-Arnold attempts a speculative strike from the right side of the box, but it is also charged down by the Chelsea defence.

After a brief period down on the turf receiving treatment for a knock, Thiago Silva appears to be fit enough to return to Chelsea’s back three, which has been under tremendous pressure in the first 10 minutes.

CLOSE! Twice, Liverpool almost open the scoring, after an exceptional through ball by Alexander-Arnold picks out Diaz on the left, and the winger’s low shot is saved by the fast-closing Mendy; then Keita thumps a shot wide of the right post from the follow-up. Nearly, but not quite!

Once again, Chalobah is unable to cope with Diaz’s pace and guile, and the Colombian’s cutback into the area is only cleared away with a last-gasp clearance.

8′ – More brilliant work from Diaz, who sees his cut back from the left narrowly evade Keita and Salah.

Back at full tilt, Jorginho shepherds Salah out of play on the right byline following Liverpool’s corner, but the Reds are starting to get on top in the early stages.

Diaz finds space on the left side of the area, and clips a ball across the box for Thiago, who is just unable to reach it with his outstretched boot, only five yards from a wide-open goal.

Chelsea’s first foray forward sees Jorginho overhit an attempted throughball to Lukaku in a central position, and Alisson sweeps the ball up under no pressure.

0′ We are underway at Wembley

Our line-up for the #EmiratesFACup final 👊🔴#CHELIV

Liverpool are second in the league, three points behind Manchester City, with two games left. They are also due to play Real Madrid in the Champions League final in Paris on May 28.

“There’s a good chance that he will be back whenever – not for the weekend but whenever,” Klopp told Liverpool’s website on Thursday.

Liverpool, who won the League Cup in February, remain on track for a haul of four trophies this season.

The broadcasting rights for the FA Cup 2021-22 will be available with the Sony Pictures Network. So you can the watch Emirates FA Cup 2021-22 Live Telecast In India on Sony Ten 2 HD and Sony Six. The channel is available for telecasting on all the service providers in India. You can connect with the DTH providers and get the channel started.

Where will the Chelsea vs Liverpool FA Cup Final match be played?

The Chelsea vs Liverpool FA Cup Final match will be played at the Wembley Stadium.

When will the Chelsea vs Liverpool FA Cup Final match be played?

The Chelsea vs Liverpool FA Cup Final match will be played on Saturday, May 14.

What time will the Chelsea vs Liverpool FA Cup Final match begin?

The Chelsea vs Liverpool FA Cup Final match will begin at 9:15 PM IST.

Which TV channels will broadcast the Chelsea vs Liverpool FA Cup Final match?

The Chelsea vs Liverpool FA Cup Final match will be telecasted on the Sony Network.