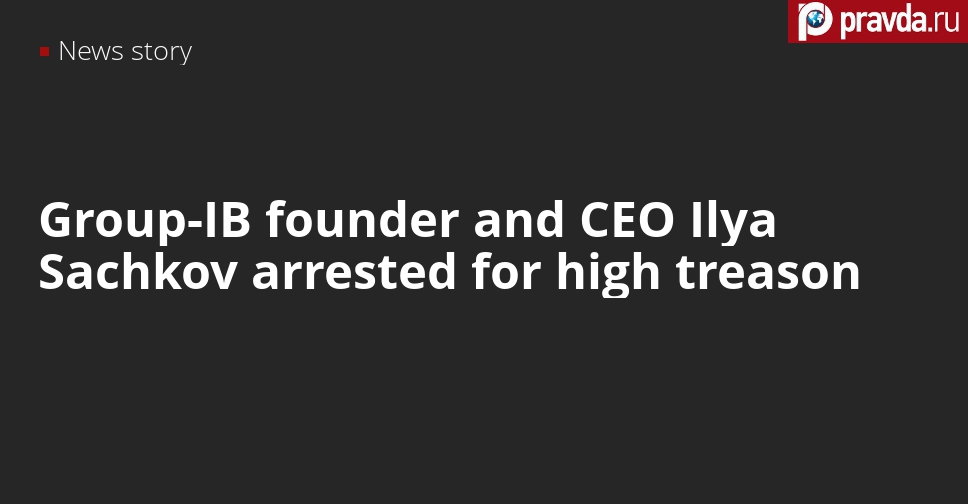 Ilya Sachkov, the founder and CEO of Group-IB, was arrested for two months by the decision of the Lefortovo District Court of Moscow.

Sachkov is suspected of committing a crime under Article 275 of the Criminal Code of the Russian Federation (“High Treason”). The article stipulates a maximum punishment of up to 20 years in prison. Ilya Sachkov was taken into custody before November 27.

The day before, Moscow office of Group-IB was searched. The press service of the company said on Wednesday that they did not have any information on the reasons for the operational search measures.

Group-IB still continues providing its services to customers as before. Earlier, Sachkov said that if the Russian office of the company was going to be closed, its functions would be delivered to the office in Singapore, where the company is headquartered.

Criminal cases under Article 275 of the Russian Criminal Code are investigated by the Federal Security Bureau (FSB). Due to the fact that their materials contain state secrets, cases, as a rule, are considered behind closed doors.


In April, for example, associate professor of the Moscow Aviation Institute, Alexei Vorobyov, was sentenced to 20 years in a maximum security colony. The trial of the adviser to the head of the Russian Space Agency Roscosmos and former journalist Ivan Safronov also takes place behind close doors.


Group-IB was founded by Ilya Sachkov and Dmitry Volkov in 2003. The two businessmen hold the control block of shares. Dmitry Volkov holds the position of the technical director.

Group-IB provides services to prevent cyberattacks and investigate high-tech crimes. The company develops tools to combat online fraud, and also works in the field of computer forensics and audit of information security systems.

In an interview with RBC in December 2020, speaking about a possible threat to the company and its employees, Ilya Sachkov claimed that killing people was a stupid activity to engage into.


“It’s easier to discredit a person, to show that the company deceives the state in some way. My favorite statement is that Group-IB is a group of American spies, or that my grandfather is the famous professor of cryptography [former KGB officer Vladimir] Sachkov. By the way, he is just a namesake.”