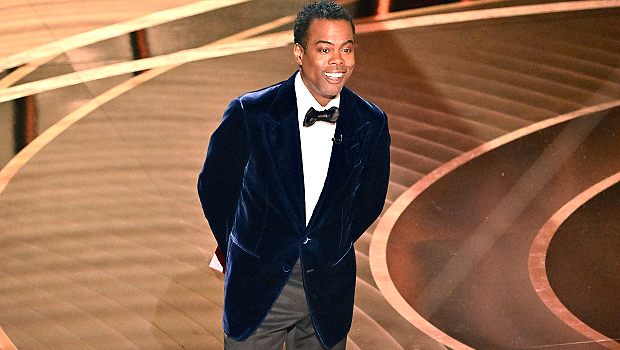 Comedian Chris Rock is no stranger to finding humor in the messiness of life. Following Will Smith‘s shocking on stage slap at the 2022 Oscars, Chris addressed the elephant in the room by cracking a clever joke during his standup set on May 12.

“I’m OK, if anybody was wondering. Got most of my hearing back,” he reportedly said at the Royal Albert Hall in London, according to The Telegraph. Likely, not wanting to dwell on the situation, he shut down any further conversation about the slap during the show. “Don’t expect me to talk about the bulls**t. I’ll talk about it at some point — on Netflix. Your tickets were expensive, but not that expensive,” he sharply added.

This isn’t the first time that the 57-year-old has publicly addressed the infamous incident during one of his routines. “I’m OK, I have a whole show and I’m not talking about that until I get paid. Life is good,” he said at one of his stand up shows in California in April, according to the Palm Desert Sun.

Oscars 2022: Photos Of The Show Highlights

However, others in Chris’s life have been more vocal about the highly controversial event. “I told someone, when Will slapped Chris, he slapped all of us, but he really slapped me. When you hurt my child, you hurt me,” his 77-year-old mother Rose told WIS 10 News. “I have no idea what I would say other than, what in the world were you thinking?” She added when asked about how she would address Will if she got the chance.

At the 2022 Oscars, actor Will angrily stormed the stage and slapped Chris after he made a joke about his wife Jada Pinkett Smith‘s alopecia, referring to her as “G.I Jane.” The Grownups star has one year to press charges against Will for the slap, but is currently choosing not to do so. “At this point, it’s highly unlikely that Chris will ask for a filling against Smith,” Los Angeles based criminal attorney Lara Yeretsian told Hollywoodlife in an EXCLUSIVE INTERVIEW.

Chris Rock’s Kids: Everything To Know About The Comedian’s 2 Children

Although the I, Robot star will likely not be arrested for the slap, he is facing other serious consequences for the incident. In April, it was announced that he was banned for ten years by the Academy, meaning he will not be able to attend any events or awards hosted by the organization for the next decade.