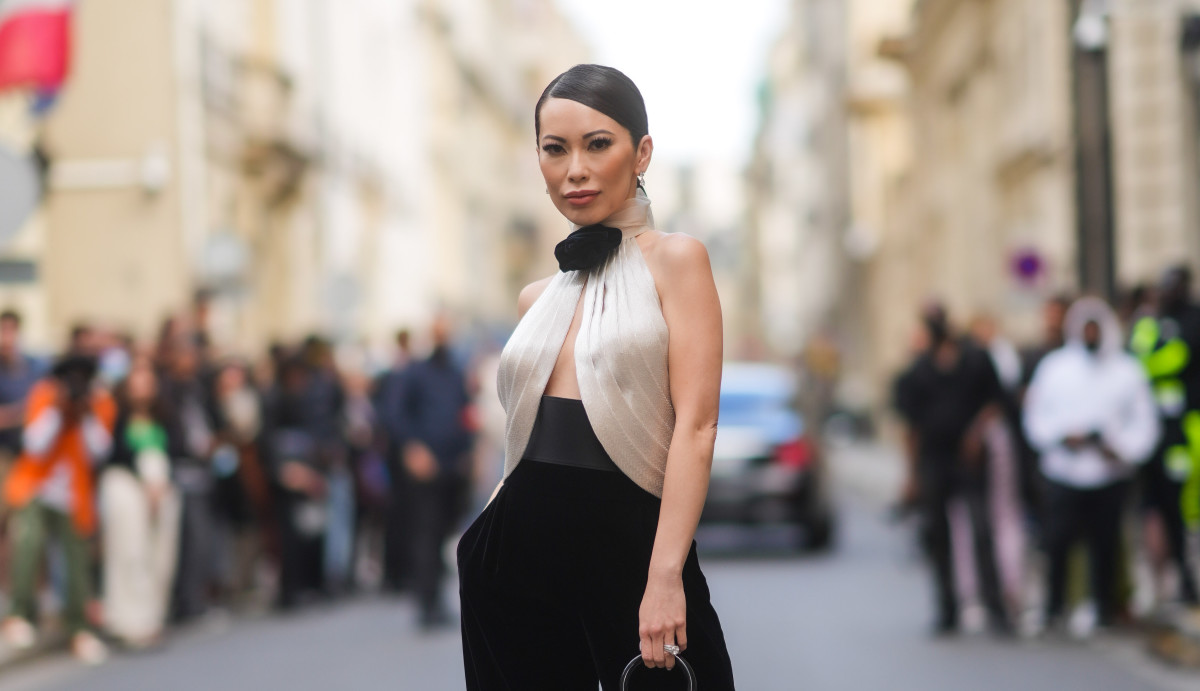 A lot has happened since we left Christine Chiu at the end of season one of “Bling Empire.” The Netflix reality series follows a group of affluent Asians living in Los Angeles. After those episodes started streaming in January 2021 (having filmed through most of 2019), Chiu emerged as the fashion-obsessed haute couture collector, butting heads with socialite Anna Shay. The gang’s back together for round two, and the world is completely different. But some things stay the same.

The second season brings back Chiu, Shay, Kevin Kreider, Kim Lee, Kelly Mi Li, Kane Lim and Jamie Xie (Cherie Chan and Jessey Lee only appear in a few episodes, though they’re at the center of some of the drama depicted on screen), and introduces Dorothy Wang and Mimi Morris to the crew. It filmed throughout the summer of 2021, only a few months after the series debuted.

“I think we started around May, but then we had some changes in production members, so we kind of stopped and then restarted,” Chiu tells Fashionista. That pause meant some things — and outfits — were left on the cutting room floor: “I threw a ’60s-themed beach party, where everyone dressed up. This was back in May. I was determined to just live my best life, and bright colors really brighten up my mood. I love anything themed, so I went for it.” (The outfit credits, for those curious, are “Bottega shoes, Versace earrings and the headband I want to say is from Michaels craft store.”)

With a jaw-dropping wardrobe and deep knowledge of designers, Chiu made her love of fashion abundantly clear in season one, to the point where it became part of her storyline with Shay. “Necklace Gate” may be a thing of the past, but that’s not to say that interpersonal conflict has been resolved — still, Chiu did want fashion to take a backseat when it came to her plot in this new chapter.

“I feel like season one, really, was only one or two facets of me,” she says. “Obviously, it’s a show about affluence, so it led heavily with me, the jewelry and the clothing. But my life is so much more well-rounded and different than just that — I’m a mom, I’m a business woman, I’m a wife. There are really interesting and heartfelt aspects of my life that I felt were omitted from season one. So, I really begged to show a more authentic, fuller version of Christine; some made it in, some didn’t, but some is better than none.”

Chiu is quick to clarify that that doesn’t mean fashion became an afterthought for her — it’s still very much a big part of who she is and what we see on the show — but rather that she wanted to expand how she was portrayed on the show in these new episodes. That, and real life got in the way.

In season two, we see Chiu mourning the loss of her mother and working through grief in real time, on camera. Off-screen, the world was still reeling from living through a global pandemic, at that point, for over a year, and from the Black Lives Matter resurgence in 2020 and the increase in anti-Asian crimes in the U.S. “All of those combined did shift my approach to fashion,” she says. “It prompted me to be a little bit more practical with my clothing and jewelry selection — I’ve never worn couture every day, all the time, anyway.”

That, plus editing, meant some sartorial shifts were left out, from the aforementioned ’60s-themed beach party that gave us Chiu’s look in the season two promotional poster to a hip hop dance class with Kim. But worry not: There’s still plenty of fashion worth discussing.

The audience is reintroduced to Chiu in Paris with her husband, Dr. Gabriel Chiu, and son, Gabriel, a.k.a. “Baby G.” They’re in town for the Fall 2021 haute couture shows — the first happening IRL since the beginning of the Covid-19 pandemic — when Morris calls inviting the family to her anniversary party in a few days… in Orange County. (“What about Cannes?,” Dr. Chiu, a truly underrated member of the cast, asks immediately.)

We only get a short glimpse at the July 2021 trip, but Chiu says “it was my favorite couture season, because Baby G and Dr. G were both with me. To be able to experience Paris as a family, during a heightened season like fashion week, is unparalleled — particularly because it was empty. Paris was very quiet because of the pandemic, so we really got to do everything. We got to eat at every restaurant we wanted to, we went to the zoo, we went to the park. It felt like we had Paris all to ourselves as a little family, and I’ll never forget it.”

The Chius were indeed able to do fashion week, walk the red carpet at the Cannes Film Festival and attend the Morris’ anniversary party. If she has any sort of sartorial regret, it has to do with what she wore to the latter, actually: “I’m really sad that I wore my brand-new Armani Privé — not that her anniversary didn’t warrant it, it’s just that we went straight from Paris to L.A. to Orange County without stopping. We changed at the airport. That was a gown that I wanted to save for something super special, but I had it in my luggage and I pulled it out. It was so last-minute. It was wrinkled. I scrambled to put it on. I fumbled out of the car after a long drive, sitting in that dress. I just felt like I didn’t do it justice. I would love a redo with that Armani Privé dress.”

Chiu says she didn’t plan out every single one of her outfits to film season two. (“People give me so much credit for being so strategic or well thought-out, and I appreciate that I may come off like that, but in actuality, I’m a scramble shopper. I’m really busy with being a mom to a toddler and running a business, having some philanthropic commitments — I really just try to pull the best thing at the last minute.”) However, there were a handful of key looks that were very intentional.

Take what she wore to visit Shay’s new estate, in an effort to mend their relationship. “I thought I was going to her home with full intentions of some kind of reconciliation. In fact, the producers were like, ‘It would be so awesome if you and Anna were able to patch things up and do good in the world.’ So, I was like, ‘Okay, I’m going to be the sweetest I can possibly be going to her house,’ kind of, in my way, through fashion, putting up my arms like I surrender,” she says. “I wore a pink dress and a cake as a purse, and I’m bringing in fresh herbs from Baby G’s garden. And you know what happened.”

Chiu did really enjoy the outfits she’d wear in her confessionals. “I like to play. Growing up, I didn’t have Barbie dolls. I didn’t get to play dress up. I’m taking it out on my adult life,” she says. “It’s that one moment to play dress-up. You’ll see the wigs and then you’ll see feathers.”

Chiu was surprised by the reaction some people had to the fashion in the first season — not so much what she wore, but how she talked about it. “There was some gripe about me name-dropping designers, and that was so strange to hear,” she says. “Fashion is part of my everyday vocabulary. I serve on fashion boards. I’m very passionate about fashion. So, saying ‘Chanel’ and ‘Dior,’ if anything, comes from a place of respect and homage to the brand and the people behind it, not as leverage or establishing whatever. It was really eye-opening to me that that could be misinterpreted in that way.”

Still, fashion will continue to be a part of the series: We know Chiu brought camera crews — and Kreider! — to the Spring 2022 haute couture shows in Paris back in January, so surely we’ll get to see their fashion week antics in season three.

“I cannot wait for viewers to watch those episodes and those scenes, because I had the best time in real life, in person, with Kevin,” she says. “We get into shenanigans — not with each other— and there are a lot of surprises that I had in store for Kevin. It’s so fun to experience couture through his eyes, too, because I’ve been doing it since my mid-20s, so for well over 10 years; not that it ever gets old, but sometimes you need someone to help you realize how fortunate you are, how spectacular this and how lucky we are to even be able to experience it. And I kind of play dress-up with him. He’s like my little brother, so I get to dress him up.”

Season two of “Bling Empire” begins streaming on Netflix on May 13.

Want the latest fashion industry news first? Sign up for our daily newsletter.