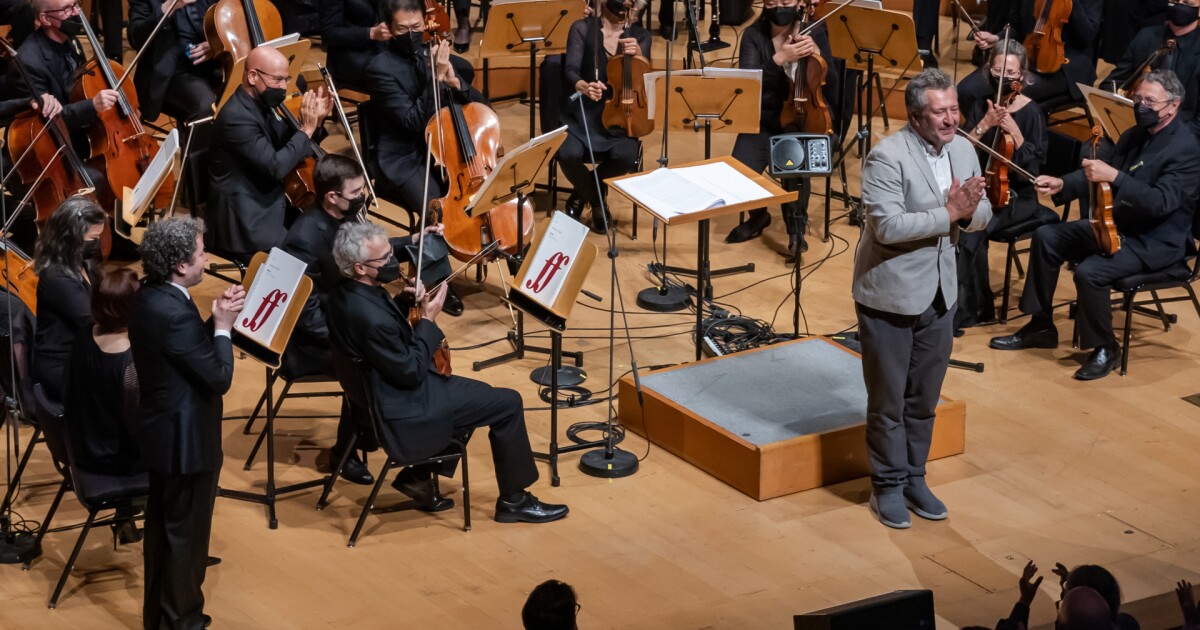 Let us now, 702 years since the publication of “The Divine Comedy,” count the ways: the forever Omicron, climate change, nuclear saber-rattling.

It was almost exactly three years ago that Thomas Adès’ wondrously anarchic and entertaining “Inferno” had its premiere, a fantastical highlight of the Los Angeles Philharmonic’s centennial season. Back then, finding brilliant comedy in our human frailties seemed doable. Meant as the first part of an evening-long “Divine Comedy” ballet choreographed by Wayne McGregor for Britain’s Royal Ballet, the danced “Inferno,” which had its premiere at the Dorothy Chandler Pavilion a month later, became a darker work⁠. It was still full of vivid cheek, if a bit creepier.

During lockdown Adès finished the final two parts, “Purgatorio” and “Paradiso,” with the complete work given its premiere by Royal Ballet in London last October as “The Dante Project.” The full orchestral score, simply called “Dante” and commissioned by the L.A. Phil, had its concert premiere last weekend as the main event in the orchestra’s Gen X festival curated by the 51-year-old British composer.

At the hopeful time of the festival’s planning last year, spring 2022 looked like a time of renewal when we would finally be beyond the pandemic, presumably at peace and with the possibility of a newly enthused global cooperation to combat global warming. We know how all that’s turned out.

Here’s how “Dante” (as the orchestral score for the full ballet is titled) turned out. In “Inferno,” conducted by Gustavo Dudamel with hair-raising vivaciousness, we find ourselves taking alarming pleasure over our ridiculous neighbors, politicians, scammers, you name ’em, coming to hilariously awful no good. In the second half, we realize the joke is on us. Humanity is what was at stake for Dante and what is at stake for us. “Purgatorio” and “Paradiso” are where we find our angels, and they are not where you think they are.

In any new shortlist of great ballet scores by Tchaikovsky, Stravinsky, Bartók, Ravel, Prokofiev, Britten and Bernstein, “Dante” must newly be included for its musical invention alone. There is not a second in its 88 minutes that doesn’t delight. All of it is unexpected and wanted. But what is most unexpected and wanted right now is Adès’ extraordinary abandoning of abandoning hope.

He sets the tone though the magnificently malicious parody of “Inferno.” All those deviants and devious fortune tellers, popes and gluttons writhing in slime, the selfish eternally stung by wasps and thieves devoured by reptiles have no way out. And yet they are glorious.

Using Liszt as an extravagant model and further happily drawing from or transforming Ravel, Mussorgsky, Dowland and others, Adès revels in his own exceptional extravagance. In funny ways, both ha-ha and curious, Adès’ music is all those things Dante’s hell punishes. It is the whirlwind. It faces, like the fortune-tellers, two directions at once (here, old and new). Beauty, excitement, ferocious imagination and astonishing skill aren’t moral judgements, but they are the ways of artistic illumination.

For the ballet’s second half, Adès abandons Lisztian revelry. “Purgatorio” is based on the Syrian cantorial tradition. The scene of Dante’s approaching purgatory at dawn becomes morning in Jerusalem at the Great Synagogue Ades of the Glorious Aleppo Community. There is what sounds like the recording of waves at sea and the singing of a cantor, his voice time-worn and timeless, his spirit soaring.

Recordings of the cantor, and of an ecstatic congregation, lead the ascent through dance and prayer, the orchestra entering into its own jumpy or sorrowful klezmer-like riffs. For 27 minutes you are transported to a world distant — the synagogue is the center of what is left of the Syrian hazzanut style of singing. In Adès’ hands, it is this very transportation outside of our own experiences to an ancient and preservable realm that relieves a listener of expectations.

Like “Purgatorio,” “Paradiso” is 27 minutes. It takes a hazzanut melody and spins it out along an out-of-body journey past moon, Mercury, Venus, sun, Mars, Jupiter, Saturn and distant fixed stars. The stellar bodies are not given particular character. We’re the ones spinning, the music is going nowhere. Yet in the going nowhere, you may be propelled by an energy of quiet ecstasy.

Movement and time feel suspended in stasis. The 27 minutes mean nothing. Throughout the score, Dudamel’s conducting at the Saturday night performance had never been more virtuosic. But what proved most impressive was his intensity of that stasis, the feeling that this music was sourced by a sorcerer.

The arrival is at empyrean, announced by a hidden, mystic Los Angeles Master Chorale. That the clichéd ending proved moving beyond words becomes the ultimate unexpected. Magical empyrean is mundane Earth. We’ve changed, not it.

The Gen X festival that surrounded “Dante” was basically a gathering of Adès’ friends. There wasn’t much talkin’ ’bout my generation from the composers supposedly born between 1965 (the year of the Who’s hit “My Generation”) and 1980. In a short program note, Adès suggested that if there is one big thing about creative Gen X artists, it is “that there is no one big thing.”

“Who wants to be put in any kind of box,” he concluded, “be it a ‘generation,’ or a start and end date?” So he fudged with birth dates a little at both ends. In the unboxed first night of the festival, in which Adès conducted the L.A. Phil and appeared as pianist in a post-concert recital with violinist Pekka Kuusisto, no two works or composers were alike.

Adès put his own wondrously whimsical spin on old English dances in his newly orchestrated “Märchentänze” (Dances From Fairytale), which also featured Kuusisto as soloist. In one dance, “A Skylark,” the solo violin is joined by an organized chaos of orchestral violins, mimicking individual birds swooping down to earth, as skylarks do, and then soaring away as Adès also does in “Dante.”

A second orchestral program conducted by Teddy Abrams included a blazing performance of the first movement of Andrew Norman’s dazzlingly daffy “Play” and a loving one to Jonathan Bailey Holland’s gentle ghostbuster, “Stories From Home,” an ode to a Cincinnati concert hall.

I left that Sunday matinee concert at intermission (the second half was 84-year-old John Corigliano’s Symphony No. 1) and headed to the Arts District for the West Coast premiere of Gen X-er Tyshawn Sorey’s “For George Lewis” in the courtyard of Hauser & Wirth. This was part of a free Monday Evening Concerts on a rare Sunday afternoon concert put on in conjunction with Gary Simmons’ exhibition “Recapturing Memories of the Black Ark,” for which Holland’s score would have also been relevant.

Sorey’s 50-minute chamber orchestra score moves with slow, exquisite, out-of-the-box Gen X deliberation. Ironically, it was written for and recorded by the New York new music group Alarm Will Sound, which was playing two more Gen X composers in a post-concert L.A. Phil program at Disney around the same time.

At Hauser & Wirth, though, Jonathan Hepfer led the ECHOI ensemble with unalarming effervescence. This was outdoors. The sun beat down and space in the shade was limited and fought over. The courtyard restaurant was noisy. Yet that slow going nowhere felt unexpectedly and specially illuminated, as if right at home in Adès’ world.

In August, Sorey and Adès will be the featured composers at the Lucerne Festival and share a program. With Gen X, no big thing can be a very big thing.