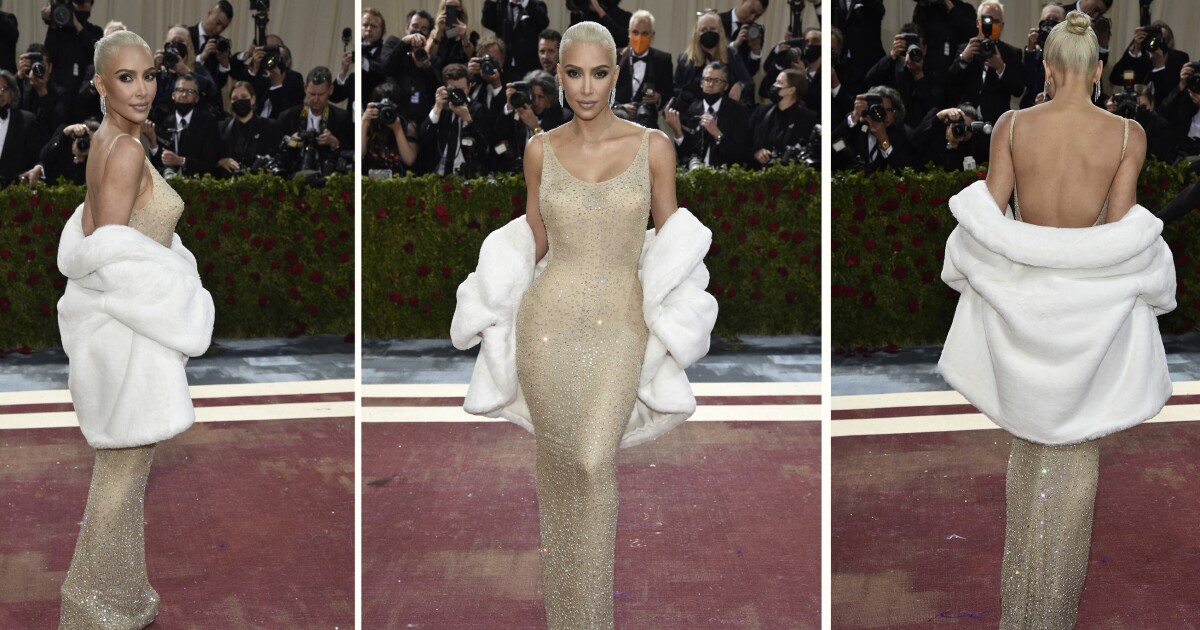 Kardashian, a pop culture phenom in her own right, became the only other person to slip into the historic garment for Monday’s Met Gala, a “gilded glamour”-themed affair at New York’s Metropolitan Museum of Art. “The Kardashians” star joined hundreds toasting the opening of the Costume Institute’s newest exhibition, “In America: An Anthology of Fashion,” which celebrates historical context and tells stories of unsung heroes in early American fashion design.

“I’m frustrated because it sets back what is considered professional treatment for historic costume,” says Sarah Scaturro, Chief Conservator at the Cleveland Museum of Art and formerly head of the Met’s Costume Institute. “In the ‘80s, a bunch of costume professionals came together to state a resolution that historic costume should not be worn. So my worry is that colleagues in historic costume collections are now going to be pressured by important people to let them wear garments.”

Cara Varnell, a longtime independent art conservator specializing in historic dress, put it this way: “We just don’t wear archived historic pieces,” she says. “Obviously, if you have a Charles James hanging in your grandmother’s closet and you want to wear it, fine. But something that’s archived means it has enough cultural importance that we value it and want to save it. The dress represents something very important — it’s part of our collective cultural heritage. I’m speechless over it.”

The reality TV star took on the sartorial soiree’s theme and historical context requisites by selecting Monroe’s bejeweled gown, which she described as “the original naked dress.” The “Some Like It Hot” star herself had to be sewn into the piece ahead of her sensual 1962 performance at a Madison Square Garden fundraiser that took place a few months before her untimely death.

“The idea really came to me after the gala in September last year. I thought to myself, what would I have done for the American theme if it had not been the Balenciaga look? What’s the most American thing you can think of? And that’s Marilyn Monroe,” Kardashian, 41, told Vogue. “For me the most Marilyn Monroe moment is when she sang ‘Happy Birthday,’ to JFK, it was that look.”

Monroe’s gown, the most expensive dress ever sold at auction, is made of a delicate fabric called souffle. It’s stretchy and resilient when it’s new, but becomes weaker and more brittle with age. What’s more, it’s embroidered with heavy beadwork — thousands of hand sewn beads. “Gravity can do a lot of damage,” says Kevin Jones, Curator of the FIDM Museum at the Fashion Institute of Design & Merchandising. “Whenever you move, something is giving way, even if you can’t see it. Under a microscope it would show all these little splits. And over time that would be a big problem. ”

What’s at risk, Jones adds, is more than just a dress. The garment is a vehicle channeling history — “it speaks” — and damage to it has cultural consequences for generations to come.

“Our job is to get the garment to the next generation with as little damage as possible so that 500 years from now, these objects are around to talk about our history, our collective history as people, design, technology, arts and culture,” Jones says. “All of that gets blended into a single object, in this case a garment. It represents a moment in time.”

Ripley’s Believe It or Not! in Orlando loaned the gown — believed to now be valued at over $10 million — to Kardashian after acquiring it in 2016 for nearly $5 million. In a statement, Ripley’s said that it “strongly feels that this dress, with both political and pop culture significance, is the most famous item of clothing from twentieth century culture.” (The gown and some of Monroe and Kardashians’ accessories will be put on display at Ripley’s Believe It or Not! Hollywood for a limited time beginning Memorial Day weekend.)

“We are truly proud to be the stewards of such an iconic artifact and are excited to be able to add to its cultural significance with Kim Kardashian, who is sharing the story of Marylin Monroe and her iconic career with an entirely new generation,” Ripley’s VP of Publishing and Licensing Amanda Joiner said in a statement on Monday.

It’s worth noting that Ripley’s Believe It or Not! is not a museum. It’s part of a privately owned, for-profit “attractions company,” as it refers to itself, with themed locations around the world. While Kardashian didn’t pay the company a fee to don the dress, she donated money — Ripley’s would not disclose how much — to two organizations on Ripley’s behalf.

“She’ll be donating to two Florida-based organizations — a goodwill gesture in appreciation of us allowing her to wear the dress,” Joiner adds in an interview. “We’re not disclosing their names, but they’re organizations we’ve worked with in the past and they’re youth oriented in arts and under-served communities.”

Kardashian, the Skims shapewear founder, who went blond for the event and ascended the Met’s Grand Staircase along with her boyfriend Pete Davidson, also said she didn’t initially fit into the dress. She shed 16 pounds for the occasion because she wasn’t allowed to alter the gown and reportedly had to drape a fur stole over the partially fastened zipper. After taking photos in the dress, Kardashian then changed into a replica dress for the gala itself, Ripley’s said, noting that “great care was taken to preserve this piece of history.”

Kardashian also said that armed guards and gloves were required at her fitting.

“With input from garment [conservators], appraisers, archivists, and insurance, the garment’s condition was top priority,” Ripley’s said. “No alterations were made to the dress.”

John Corcoran, Director of Exhibits and Archives for Ripley’s Believe It or Not! — and the individual in charge of conservation there — added that Kardashian could only wear the dress after adhering to several guidelines. That included no body makeup, no alterations and only wearing the garment for the red carpet portion of the evening. “No damage occurred at last night’s event,” Corcoran said in a statement, adding that Kardashian “has become a steward—and added to—its history.”

But Scaturro says there are still inevitable dangers: perspiration, sunlight and oxygen, in addition to changes in temperature and humidity, pose threats to such a fragile garment. “Putting it on a human body will damage it no matter how careful you are,” she says.

On Wednesday, the dress will return to the Ripley’s Vault in Orlando, Corcoran notes. He describes the space as a dark, temperature and humidity-controlled room. In order to maintain the fabric’s integrity, the dress will not be washed. It will be housed in a case, mounted on a form and covered in acid-free, cotton muslin.

“The form helps prevent folds and stress on the dress,” Corcoran says, “while the muslin protects it from light, humidity, and environmental contaminants.”

How will the dress get to Orlando? On Kardashian’s private jet, Ripley’s said.

Fashion historian Kimberly Chrisman-Campbell, author of “Worn on This Day: The Clothes That Made History,” says the whole incident is a bit meta.

“The Met Gala is now part of the garment’s history — and it didn’t need to be,” she says. “I was kind of baffled by the whole decision to wear it at all because it didn’t really fit the theme of the night — and they made a full replica, so why not just wear the replica?”

If there’s an upside to the incident, some curators and conservators said, it would be creating conversation around fashion conservation. But the risks outweigh the reward, Jones says.

“If you wear something, there’s stress and strain,” he says. “Once it’s damaged it’s always damaged. You can’t go back.”