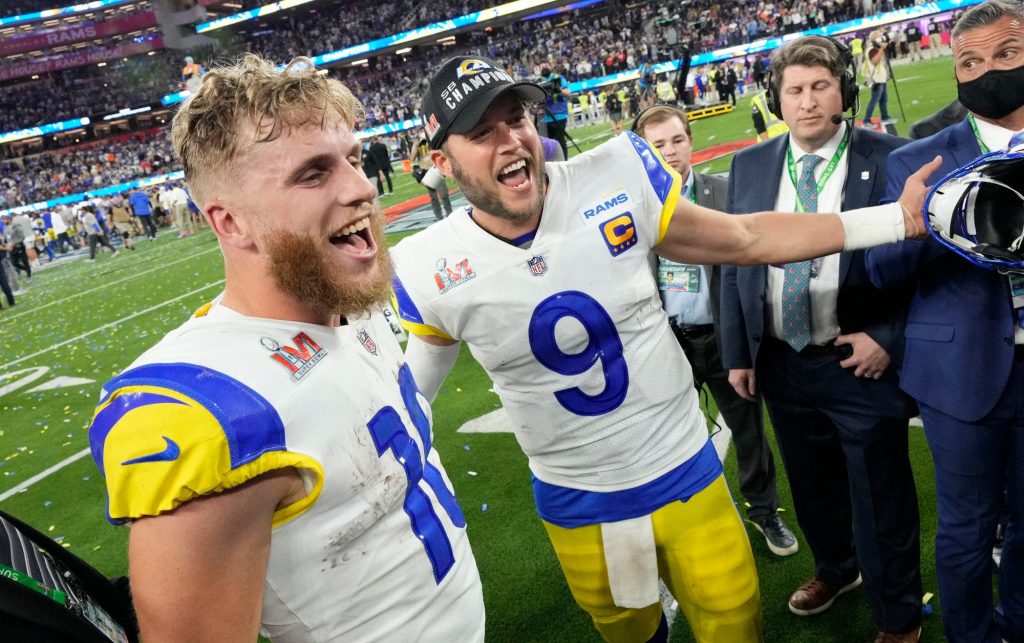 Cooper Kupp, always looking to take a different route, put a new wrinkle on the familiar image of athletes wearing their jerseys as they sign new contracts.

The wide receiver wore quarterback Matthew Stafford’s No. 9 jersey instead of his own No. 10 when he sat down on Wednesday to sign the three-year, $78.5 million extension that gives him five years and $110 million remaining on his Rams contract.

It was a joke with a serious point.

“He’s one of those people that have had a hand in (my) being able to be in this place,” Kupp said of Stafford. “Having the opportunity to extend my career here in Los Angeles and being able to sign that contract, obviously your quarterback plays a huge role in that. So I (gave) a little bit of a nod to Matthew Stafford in that way.”

Kupp and Stafford, Stafford and Kupp should be working hand in hand for years to come.

But when you’ve got a combination like Kupp and Stafford, Stafford and Kupp, you take pains to keep it going.

Stafford was third in the NFL in passing yards with 4,886 in the 2021 regular season, while Kupp led the league in receiving yards with 1,947.

Of the 10 highest-yardage passers and their leading receivers, only one pair is under contract longer than the Rams’ duo. That’s Buffalo Bills quarterback Josh Allen, who signed an extension last year, and wide receiver Stefon Diggs, who signed an extension in April. The Rams face the Bills in the 2022 season opener on Sept. 8 at SoFi Stadium, and it won’t be the last time their aerial shows share the spotlight.

“Being in this league, the turnover is just unbelievable,” Kupp said on Zoom a day after signing his new contract, which brings his annual pay over five years to $22 million, sixth among wide receivers. “It is part of this business and part of what you deal with in playing this game.

“In the ultimate team game, the more time you’ve played together, the better off you are. I’m very appreciative of this group that we have moving forward here.”

Appreciation was the theme of the day.

Kupp was asked whom he thought of as he put pen to paper Wednesday at the Rams’ practice facility in Thousand Oaks.

“I wasn’t really thinking. I was trying to remember what my signature was, remember what date it was,” he joked. “Really, I was thinking of all the people that have been part of my life, that have poured into me. In one way or another, there’s so many people that have had a hand in making me who I am today as a person, as a father, as a husband and as a football player.”

Kupp’s own father, Craig, was an NFL quarterback briefly, and his grandfather was a one-time Pro Bowl offensive lineman.

Cooper Kupp has a knack for turning almost any question about his individual accomplishments into praise for teammates, and he did it again when he was asked if he could have imagined what he did last season.

“It’s about the people I’ve been around,” Kupp said. “None of it would have been possible without the coaches and the guys I’m able to come in and prepare with week in and week out. It’s not lost on me, and I’m incredibly thankful for it.”

And the biggest part of it – Kupp and Stafford, Stafford and Kupp – looks unlikely to end anytime soon.