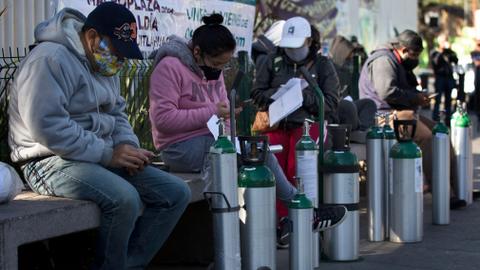 Covid-19 has infected more than 255M people and killed over 5.1M worldwide. Here are the coronavirus-related developments for November 17:

France has registered more than 20,000 new confirmed coronavirus infections for the first time since August 25 as the fifth wave of the epidemic picked up speed.

The health ministry reported 20,294 new cases, taking the total to 7.33 million and the seven-day moving average of new cases to above 12,400.

Covid-19 deaths decrease by 17 percent in the Americas

Covid-19 deaths have decreased 17 percent in the Americas over the past week, but the most populous countries like the United States, Brazil and Colombia are seeing a leveling of new infections after weeks of declining trends, the Pan American Health Organization (PAHO) said.

Mexico is reporting an increase in new deaths and in the Caribbean Trinidad and Tobago had a sharp rise in deaths as intensive care unit (ICU) beds fill with Covid-19 patients, PAHO also said.

In an important milestone, half of the people in Latin America and the Caribbean have now been fully vaccinated against Covid-19, though coverage remains below 10 percent in Nicaragua and Haiti, PAHO Director Carissa Etienne said while adding that people should get vaccinated and stick to social distancing and mask wearing as the holiday season approaches.

Countries across Central and South America have seen a decline in new infections, except for Bolivia.

As Uruguay and Chile have relaxed pandemic restrictions, Covid-19 cases have spiked, even with their high vaccination coverage, the health agency said.

Italy has reported 72 coronavirus-related deaths against 74 the day before, the Health Ministry said, while the daily tally of new infections rose to 10,172 from 7,698, breaching the 10,000 threshold for the first time since May 8.

Italy has registered 132,965 deaths linked to Covid-19 since its outbreak emerged in February last year, the second-highest toll in Europe after Britain and the ninth-highest in the world. The country has reported 4.9 million cases to date.

The Swedish government plans to introduce a requirement for Covid-19 vaccine passes at indoor events where more than 100 people attend, a step recommended by health officials warning of a rising tide of infections in coming weeks.

The government was preparing a bill to be put forward to parliament with the aim of having the vaccination passes in effect from December 1, Health Minister Lena Hallengren said.

Around 85 percent of all Swedes over 16 have received one dose vaccine and 82 percent have had two doses or more.

The Covax scheme aimed at equitable global access to Covid-19 vaccines has now delivered more than 500 million doses around the world, according to latest figures.

Covax, co-led by the World Health Organization (WHO), Gavi the Vaccine Alliance, and CEPI, the Coalition for Epidemic Preparedness Innovations, had said at the beginning of the year it hoped to deliver two billion doses in 2021.

“Thanks to incredible hard work and dedication from partners and health workers, Covax has delivered 500 million Covid-19 vaccines to 144 countries and territories,” Gavi chief executive Seth Berkley said on Twitter.

Britain has recorded 38,263 new cases and a further 201 deaths within 28 days of a positive test, official data showed.

The Robert Koch Institute said 294 more people died in Germany of Covid-19 in the last day, bringing the country’s pandemic death toll to 98,274. The number of infections recorded since the start of the pandemic has reached almost 5.13 million.

The World Health Organization on Tuesday also cited Germany, along with Russia and Britain, as the countries with the most new cases in Europe.

The United States has signed contracts worth roughly $1 billion to secure the antibody-based Covid-19 treatment sotrovimab from GSK and Vir Biotechnology, with supply expected by December 17.

Britain’s GSK said the deal brought the total number of doses secured of the treatment, branded Xevudy, to more than 750,000 globally, adding that the United States would have an option to buy additional doses through March 2022.

The companies did not specify how many doses the US government had signed up for.

The US Food and Drug Administration in May gave an emergency use authorisation to the GSK-Vir treatment for treating mild-to-moderate Covid-19 in people aged 12 years and older, who are at the risk of their illness worsening.

Swiss voters look set to support the government’s pandemic response plan in a binding referendum this month, a poll for broadcaster SRG showed on Wednesday.

The gfs.bern survey found 61 percent backed a law passed in March that expanded financial aid to people hit by the Covid-19 crisis and laid the foundation for certificates the government requires to enter bars and restaurants and attend certain events.

That was the same support as in a poll in October.

The survey found 38 percent opposed and 1 percent were undecided before the November 28 referendum under the Swiss system of direct democracy, slightly more opposition than measured in the previous poll, whose margin of error is 2.8 percentage points.

The Czech Republic has reported 22,479 new coronavirus cases for Tuesday, the highest tally recorded in the country of 10.7 million since the pandemic started, Health Ministry data showed.

The Russian Direct Investment Fund, which is marketing the two-shot vaccine abroad, said the study was based on data from more than 1.2 million people who had been vaccinated with both Sputnik V components between January and September 2021.

According to the Yonhap News Agency, during the past 24 hours, the country recorded 3,187 new cases, a sharp hike from 2,125 a day earlier, bringing the total caseload to 402,775, as the country battles the pandemic’s fourth wave.

The country on Wednesday also reported 522 cases of critically ill people, breaking the previous record of 495 cases on Tuesday.

Since July 7, new infections have been rising in South Korea following the emergence of the Delta variant.

With 21 more deaths, the country’s total fatalities reached 3,158, according to the Korea Disease Control and Prevention Agency.

Auckland is the epicentre of an outbreak of the infectious delta variant of the virus and been locked off from the rest of the country for over 90 days now.

But with more than 80 percent of Auckland and the rest of country fully vaccinated it was time to open up the ability to travel again, Ardern said at a news conference.

Brazil registered 132 deaths and 4,918 additional cases, according to data released by the nation’s Health Ministry.

Mexico’s health ministry reported 735 new virus cases and 37 more fatalities, bringing the country’s overall death toll from the pandemic to 291,241 and the total number of cases to 3,847,243.

Officials have said the ministry’s figures likely represent a significant undercount of both cases and deaths.

Bangladesh kicked off a vaccination drive for informal settlement dwellers against the virus at a large slum in the capital.

The special campaign began in Dhaka’s Korail, located close to the city’s upscale residential areas of Gulshan and Banani.

“We will vaccinate all of our people, including slum dwellers across the country,” said Health Minister Zahid Maleque, speaking at a local event.

The Dutch government’s plan to scrap the “corona pass” for people not vaccinated against the virus faced strong opposition in parliament, including from within the ruling coalition.

The pass, which grants access to indoor public venues, is now available to people who have been vaccinated, have recovered from the virus or have tested negative for the virus.

Under a proposal put forward by caretaker Prime Minister Mark Rutte on Friday, the last option would be dropped.

Slovakia plans curbs on those unvaccinated as hospitals fill up

Slovakia’s hospitals are in a critical situation dealing with a surge in infections and the government will approve measures on Thursday to limit access to services for unvaccinated people, Prime Minister Eduard Heger said.

Europe has again become the epicentre of the pandemic, prompting countries like Slovakia and neighbouring Austria to re-introduce restrictions in the run-up to Christmas.