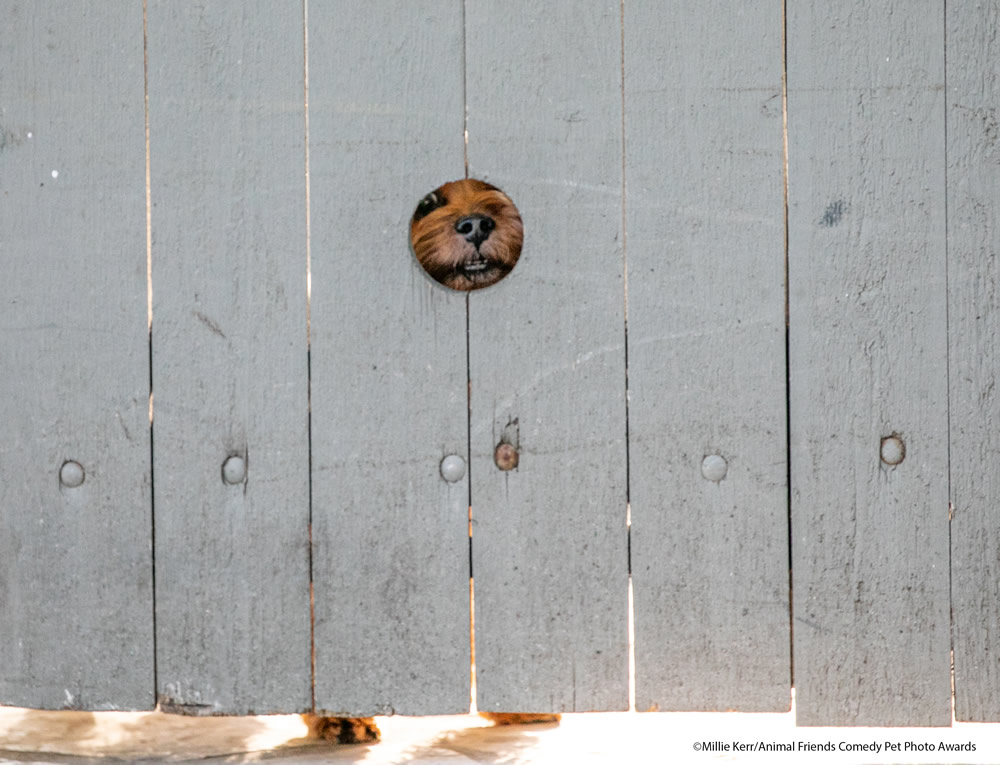 This global funny pet photo competition was created by Paul Joynson-Hicks and Tom Sullam to celebrate the positive and vital role that pets can have in our lives and to encourage and raise awareness about animal welfare in general, by supporting a different grassroots charity each year.

Thanks to its partnership with Animals Friends Insurance, this year the competition will be donating £10,000 to Animal Support Angels a very special animal welfare charity that supports pets and pet owners by providing food, shelter, warmth, veterinary support, re-homing and animal welfare care to relieve the suffering of animals.

Albie the Kitten by Ann-Marie Connolly
“Albie our kitten, he is full of energy and fun but as you’ll see from the photo he also takes some time out to relax and recharge his batteries.”

Paint me like one of your French girls! by Anna Chambers
“Paddy, who is not allowed on the sofa but thinks he is. Does he care? nope :”

Sunbathers by Catherine Falls
“Barbara Ann wants to sunbathe too”

Those Ears by Charlotte Fenwick
“Rayna is a rescue dog, who spent the first years of her life fending for herself on the streets of Romania. We rescued her in 2019, and are entertained by her quirky ways every day. Everyone who meets Rayna falls in love with her, and we think her ears have a lot to do with that!”

Hugo the Photobomber! by Chloe Beck
“This is my best friend Faith and her husband Alex… And their cheeky Sproodle, Hugo. Faith wanted a photograph to mark a special occasion – her first outing after shielding at home for 14 months. Hugo jumped into the frame at just the right moment! He’s a lockdown pup, so he hasn’t quite gotten used to the excitement of being around other people yet hehe 🙂”

Boing by Christine Johnson
“I was busy playing with my dog on the beach and this dog came to play. I liked the shapes he was making in the air.”

Excuse me, Could we Have our Ball Back please? by Christine Johnson
“Star and Will trying to get their ball back from one of the Crosby statues.”

A little massage by Christine Kaltenecker
“Both dogs are former shelter dogs from Romania. The big one is called “Milly” and visibly enjoys the “massage” from little “Holly”.”

Nosy Neighbour by Colin Doyle
“According to Ozzy we need a new fence panel ASAP. He is fed up with Chester our nosy next door neighbour spying on him every time he has a meal.”

A Warm Spot on a Cold Day by Corey Seeman
“Two of the morning regulars at the dog park are Gary (hound mix with the jacket) and Kona – who is one of the most chill dogs ever. Got this picture of Gary finding a warm place to sit on this cold winter’s day – February 9th, 2021.”

Caught red-pawed by Danielle Wood
“This is my very mischievous Bengal cat, Bailey! On this particular day I was trying to put away the washing but he would do whatever it took to get those all important belly rubs!”

Never ending Poodle by Darren Hall
“This is Ted the Poodle. I’m pretty sure he has never seen the film but the amount of people who comment that he looks like Falkor from Never ending story would suggest he may be a fan.”

Cheeeese! by David Poznanter
“Oak on a windy day showing off his pearly whites!”

Crazy in love with fall by Diana Jill Mehner
“This is Leia. As you can see, she definitly love playing with all the leaves in autumn – and yes it was really tricky to take this picture because you never know where the dog will act and what it is going to do next 😀”

Licensed to drive! by Donna Deshon
“This is Lucy! While boating on our local lake in Idaho Lucy decided to take the wheel and she did great!”

My big brother by Elizabeth Finney
“Our kitten Lola just loves her brother snoopy so much she doesn’t leave in alone!”

Home skooling by Jacki Gordon
“Ollie, highly focused on what else he can learn from a dog behaviourist’s website (which, as you can see, features a mugshot of him). While Ollie is committed to ongoing personal development, he’s not quite mastered how to use the mouse , but – being a very smart border collie – that’s just a matter of time……”

“…That was a good one!!” by Jakub Gojda
“This photo was taken by accident during the photography of my ex-girlfriend with her beloved mare. For this cheerful moment, I thank the fly that sat on the horse’s nose and he instinctively shook his head. And so it seems that the humor between a horse and a woman is definitely not missing :)).”

Chilling Ludwig by Julien Gloria
“When I go back home, and my cat is already watching the new Netflix series without me!”

Where Did Everybody Go? by Katherine Pierce
“Savi (the cat) checks out all aspects of the Christmas decorations.”

Wine time! by Kathryn Clark
“It’s that time of day again! Little Blue enjoys it almost as much as me 🙂”

Photobomb by Kathryn Trott
“Jeff stealing the limelight from his brother Jaffa.”

Cat Model by Kenichi Morinaga
“He is an model of cat.So I just focus my DSLR for cat, He is just make a pose like that and then shoot.”

So what? by Lucy Slater
“Vincent the cat..This is how I like to sit!”

Muttford and Chum by Luke O’Brien
“Losing the opportunity to play with my human band mates during lockdown, Flint my rescue dog soon taught me that we didn’t just have sharp bones in common, but musical ones too. He soon became the perfect substitute for a collaborative stomp up at home, so much so that we felt we deserved our own band name (Muttford and Chum). With my camera set up remotely during this shoot, I think it’s fair to say that the image is proof that his conviction as a performer matches my own – well, we were covering “treats and tugs and dinner bowls” by Ian Puli and the Boneheads.”

Peep Hole by Millie Kerr
“Someone in my parents’ neighborhood in San Antonio, Texas, put in a peep hole for their terrier so it can look through the fence! I love passing by and seeing its adorable face peering at me.”

Photo bomb by Mollie Cheary
“Bailey was so excited to see her friends, she couldn’t sit still for a photo!”

Feeding Sheep by Robert Moore
“The feeding of sheep in a mechanical contraption.”

The Eureka Moment! by Sophie Bonnefoi
“Cutie and Speedy are 2 chicks hatched from eggs placed in an incubator at home in August 2020. They spent their first few weeks indoors. On the photo they are just over 2 weeks old. They were curious about everything. This is the day they discovered their own shadow. It was hilarious to see them wondering and exploring that “dark thing” that was moving with them !”

Sit. by Suzi Lonergan
“Our granddaughter gave the command to sit. Beau is very obedient.”

Grace wins gold in the Rythmic Gymnastics by Walker Walker
“Grace was a feral kitten and this was one of the games I played with her to help get her used to human company.”