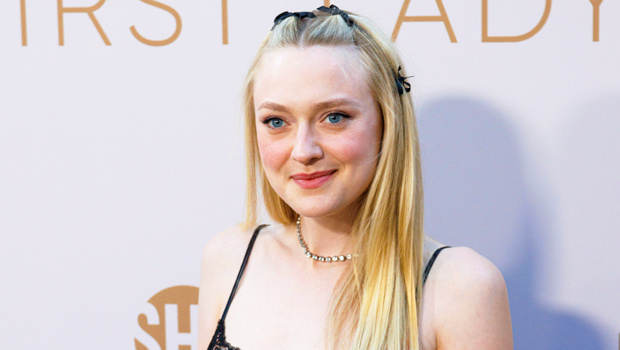 Dakota Fanning, 28, oozed pure glamour in slinky black Rodarte slip dress during the red carpet premiere of The First Lady in Los Angeles on Thursday, Apr. 14. The new Showtime drama tells the story of the Obama, Ford, and Roosevelt administrations from the perspective of the President’s #1 and premieres Sunday, Apr. 17.

The lifelong actress, who plays First Daughter Susan Ford on the show, took the red carpet wearing a black satin and lace look which was as classic as it was sexy. Her boudoir-inspired frock had skinny spaghetti straps and lace atop the bust, traveling across her center to show off hints of skin from chest to hip. Giving the look a little more oomph was a sweet and sassy slit on her left leg.

For accessories, the Once Upon A Time In Hollywood actress slipped into a pair of simple, black ankle-strap stilettos and places a diamond choker around her neck. Her makeup was dewy and fresh, featuring rosy cheeks, a peachy-pink lip, and full, girly lashes. Keeping up the feminine vibe, she pinned her hair back with several small bows.

It was the perfect red carpet look for the actress, who took on the role of Susan Ford opposite Michelle Pfieffer as Betty Ford, the wife of 38th President Gerald Ford. The First Lady also features Viola Davis as Michelle Obama and Gillian Anderson as Eleanor Roosevelt.

Dakota was excited to reunite with I Am Sam co-star Michelle for the project. During an interview with Entertainment Weekly, she gushed, “I just wanted to work with Michelle again because I did my first movie with her when I was 6 years old so I’ve always held her on this really special pedastal because she was the first actress I worked with. So just getting to know her as an adult and spend time with her and work with her was such an unbelievable experience.” The First Lady premieres Sunday, Apr. 17, at 9 p.m. ET/PT on Showtime.

Met Gala 2022 Theme Explained, Plus When & How To Watch