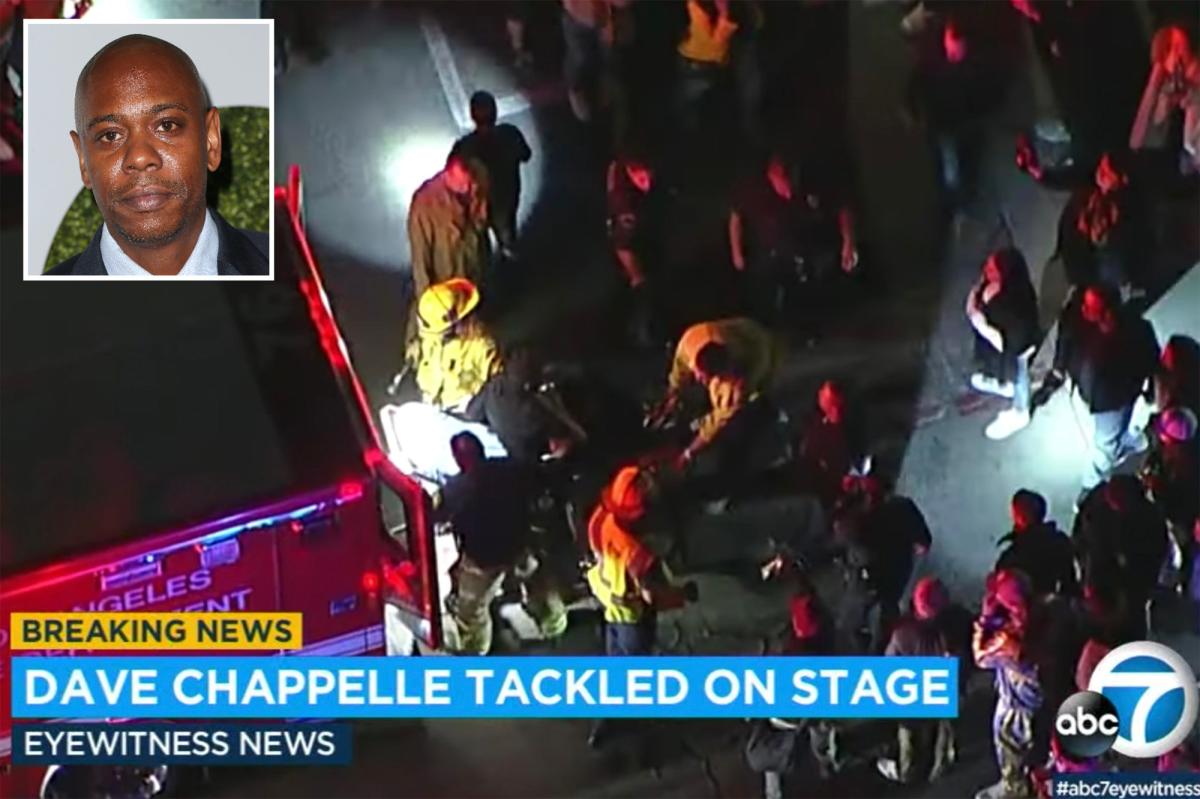 Dave Chappelle was tackled on stage by an audience member Tuesday night during his live show at the Hollywood Bowl.

The comic, 48, was performing as part of the “Netflix Is A Joke” festival, when the mayhem unfolded around 10:45 pm, toward the end of the stand-up show, according to witnesses.

Shocking video footage shows Chappelle standing on stage as an audience member charges and slams him to the ground. Seconds later, the attacker was tackled to the ground by security. LAPD responded to the chaos, according to ABC7.

Moments after the unprovoked tackle, comedy guest Chris Rock came on stage and gave Chappelle a hug, before saying, “Will, was that you?”

Rock referred to the infamous Will Smith slap after making a joke about his wife Jada Pinkett Smith’s hair loss.

Following the incident, Chappelle appeared to carry on with the show.

He later told the audience: “I don’t know if that was part of the show. I grabbed the back of that n–s head, his hair was spongy, absorbent.”

The attacker was later taken to hospital after sustaining injuries.

In one Twitter video, the suspect is seen laying on a stretcher with his elbow facing the other way.

“A man charged and tackled” Chappelle just as the show was ending, according to a tweet from Brianna Sacks, a BuzzFeed journalist who was at the show.

She said security “rushed and started punching and kicking the s– out of Chappelle’s attacker”.

In another video, Chappelle thanked Jamie Foxx for rushing in to help him, saying, “Listen, I just want to say I’ve had an incredible time.”

“I’ve been doing this 35 years, I just stomped a n–a backstage. Always wanted to do that,” he added.

After Foxx left the stage Chappelle told the crowd, “Everybody compose yourselves.”

One audience member, Jayvee Vincent, told The Post the crowd thought it was part of the show.

“While watching the end of the show Dave had the mic and as he’s introducing his favorite band to come on stage and perform, some random person charged at him like a football player and tackled him on stage,” he told The Post.

Another audience member, Geoff Witt, told The Post there was “shock and anger” towards the attacker.

“It was just a dumb person trying to do something stupid,” he told The Post. “He somehow got by the initial security.”

LAPD and Chappelle’s reps did not respond to The Post’s request for comment.