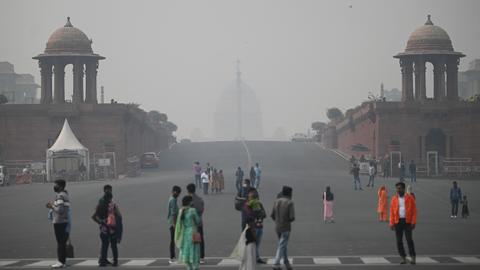 Fireworks during the festival and farmers setting fires for harvesting contributed to severe air pollution, measuring 456 on a scale of 500 on New Delhi’s Air Quality Index.

India’s capital has been blanketed by toxic air as pollution levels remained dangerously high for a second day after revellers defied a fireworks ban during a major Hindu festival and farmers in nearby states burnt stubble.

Saturday’s pollution levels were the result of fireworks on the night of the Hindu festival of Diwali on Thursday and from stubble burning in the surrounding farm belt, according to the federal Ministry of Earth Sciences’ SAFAR monitoring system.

Additionally, farmers in the neighbouring states of Punjab and Haryana set alight the stubble left after harvesting at this time of the year to prepare their fields for the next crop.

New Delhi’s overall Air Quality Index (AQI) stood at 456 on a scale of 500, indicating “severe” pollution conditions that can affect healthy people and seriously impact those with existing diseases.

The AQI measures the concentration of poisonous particulate matter PM2.5, which can cause cardiovascular and respiratory diseases such as lung cancer, in a cubic metre of air.

On social media, some residents complained about the hazardous conditions in Delhi, which has the worst air quality of all world capitals, with an annual spike often early in the winter.

The pollution in delhi makes it very difficult to live in this city. Or at least live here for too long.

We’re breathing smoke everyday. Media will talk about it. Leaders will say they are fixing it. It’ll go away and come back next year.

Toxic air kills more than a million people annually in India and takes an economic toll on the country’s populous northern states and the capital city of 20 million people.

The situation is expected to improve in Delhi from late Sunday onwards, but the AQI will remain in the “very poor” category, which can trigger respiratory illness on prolonged exposure, SAFAR said in a statement on its website.