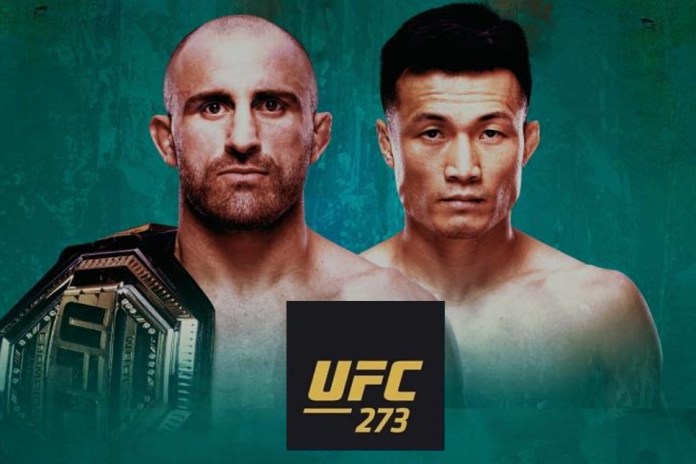 ALSO READ: UFC 273: Gilbert Burns, The Korean Zombie and Aljamain Sterling, Which one of them would be writing their own underdog story?

Ready to put their names on the title radar 📡@MackenzieDern goes head-to-head with @TeciaTorres next!

8:37- Round 1: The first round ends in a mixed exchange of strikes, both of them managed to land some big blows by the end of the round.

8:30 – The Women’s Strawweight bout is underway as Dern and Torres enter the octagon for a high octane, fireworks filled contest.

What a showing from @MarkTheOlympian 👏

8:14- Mark O. Madsen, The Olympian grabs the huge victory by a unanimous decision, Pichel showed great fight and heart but Madsen was a better man today.

8:10 -Round 3: Pichel started the round with blazing shots and a failed takedown attempt but Madsen managed to counter it with a takedown of his own. Madsen is having a strong half guard position and earning himself some good ground control time. Pichel fails to make that leg bar attempt and Madsen ends the final round with domination

Things are getting 𝐈𝐍𝐓𝐄𝐍𝐒𝐄 after 2 💢

8:05 – Round 2: Both fighters were exchanging blows but it looked like the undefeated Madsen was having an upper hand currently with those significant strikes and successful takedown attempts until Pichel grabbed his leg and almost put him in a submission and a takedown of his own.

8:00 – Round 1: Both Pichel and Madsen are keeping the game on their feet and exchanging blows by simultaneously keeping maintaining their distance from each other, Madsen did land the first successful takedown of the match but Pichel was back on his feet under few seconds.

7:52 – Pichel has entered the cage and he is all ready for the action.

7:49 – Mark O. Madsen enters the cage, the first fight of the main card is just about to hit the Octagon.

7:35 – Preview: The main card is about to start but first it is time for some action packed preview of the whole main card.

How to watch UFC 273: Volkanovski vs Korean Zombie Live Streaming:

UFC 273: Volkanovski vs Korean Zombie fight will live stream on the SonyLiv app in India. In the US, the fight will stream on Pay-Per-View, exclusively through ESPN+.

Free: (Only for Jio Customers) – Jio TV app gives access to all the live channels to stream on your mobile or tablet. However, Jio TV is available on mobile/tablet devices only.