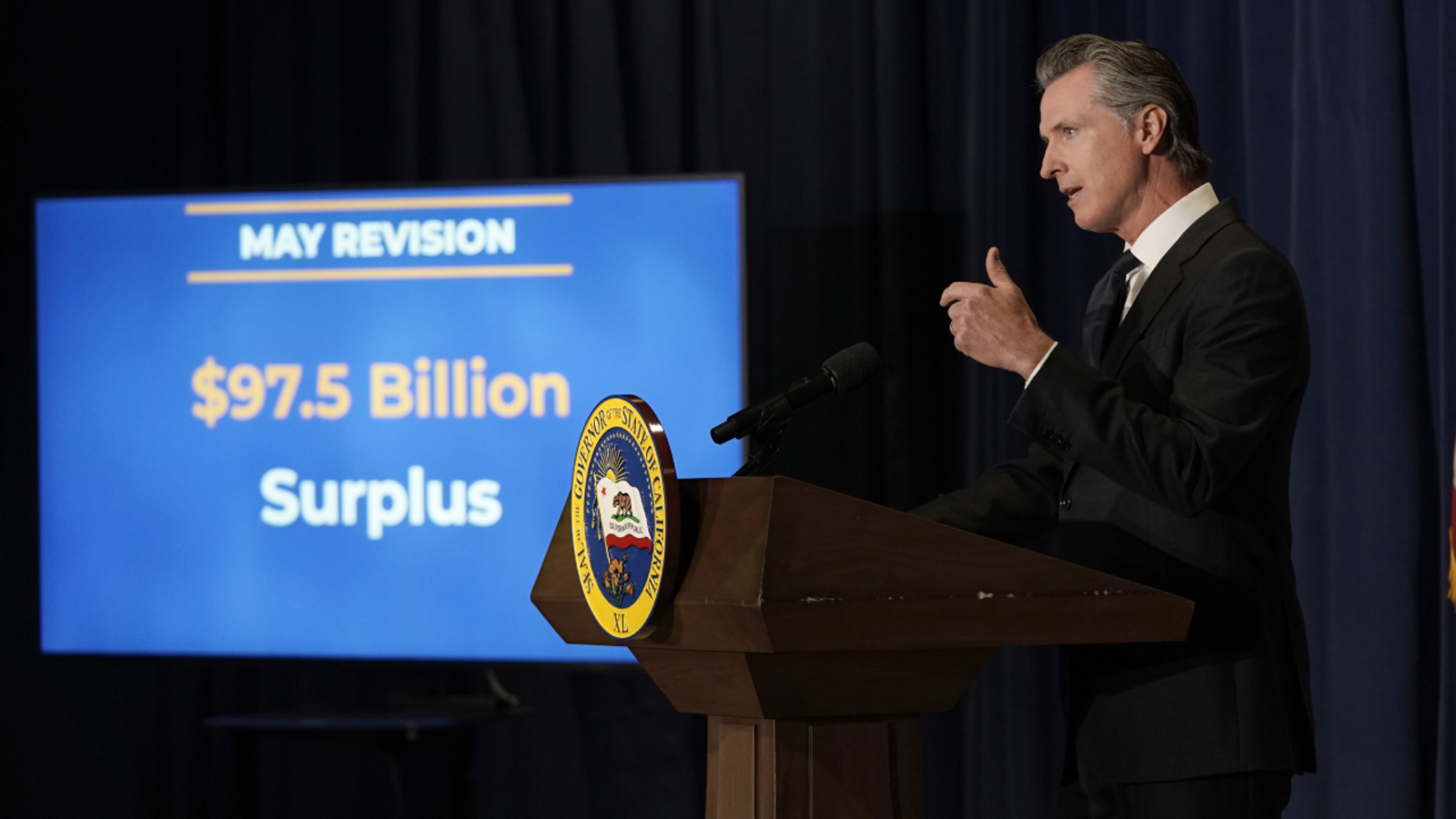 SACRAMENTO, Calif. — Despite announcing a record-smashing budget surplus of nearly $100 billion on Friday, California Gov. Gavin Newsom’s plan to spend that money would likely push the state toward a “fiscal cliff” next year that could require billions of dollars in budget cuts, a state analyst said Monday.

Newsom’s latest budget proposal, known as the “May Revision,” would leave the state $3.4 billion over a constitutional limit on spending this year and more than $20 billion over the limit next year, according to an analysis by the nonpartisan Legislative Analyst’s Office.

“The Governor’s May Revision does not have a plan to address this roughly $25 billion requirement,” the Legislative Analyst’s Office wrote in a report released Monday. “As a result, the state would very likely face a significant budget problem next year, which could require reductions to programs.”

Newsom boasted during a news conference on Friday that his spending plan would leave the state with $37.1 billion in reserves. But the LAO notes nearly $10 billion of that money is in a special public education account that can’t be used to help solve budget problems. The state’s primary savings account would have about $23.5 billion in it, or less than the $25 billion requirement projected by the LAO.

The LAO “strongly” urged lawmakers to put more money into savings than Newsom had suggested. They also recommended rejecting some of his budget proposals to keep the state beneath the spending limit this year.

The Newsom administration believes the governor’s budget proposal “well positions” the state to withstand that potential crisis, according to H.D. Palmer, spokesman for the California Department of Finance. In addition to the billions of dollars in reserve, Newsom’s budget proposal would spend 95% of the state’s surplus this year plus another $15 billion in future years on projects that don’t require recurring funding.

“That can be dialed back if needed,” Palmer said, describing the one-time spending as an “insurance policy.”

California’s potential budget problems are the result of a unique California law that limits how lawmakers can spend money above a certain limit, known as the “Gann Limit” after conservative political activist Paul Gann who helped convince voters to approve it in 1979.

The limit is re-calculated each year based on growth in inflation and population. For decades, California didn’t have trouble staying under the limit. But that changed in recent years as the state’s population declined slightly while revenues soared at an unprecedented pace – the result of a surging stock market making wealthy people even richer in a place that taxes them more than other states.

There’s only a few things lawmakers can do to get back under the limit. They can cut taxes, spend money on things that don’t count toward the limit like roads, bridges and other infrastructure projects; or they can give the money back to taxpayers.

The limit this year is $136 billion. California has $252 billion in revenue impacted by the limit. Newsom’s budget proposal spends $113 billion on things excluded from the limit – including a $5.5 billion tax cut for businesses, $39 billion of the state’s surplus for transportation and environmental projects and $11.5 billion in rebates to taxpayers who own cars.

That leaves the state about $3.4 billion over the limit, according to the LAO.

The law gives Newsom and the Legislature two years to figure out how to get under the limit. But the Legislative Analyst Office notes the state can’t “grow its way out” of the problem.

Other voter-approved constitutional rules require lawmakers to spend a certain amount of money on public education while setting aside enough to pay down debts and replenish the state’s reserves. That means for every $1 the state goes over the limit, it must spend $1.60 to get back under it.

“This means if revenues are higher than the Governor’s budget anticipates, the state will be in an even worse fiscal position,” the LAO wrote.

Democrats in the state Senate have proposed a constitutional amendment to ” harmonize and modernize” the Gann limit “to ensure core programs like health care, higher education, and public safety can continue to be funded and not artificially constrained by the out-of-date Gann Limit.”

Voters would have to approve that change, a proposal that likely would not make it on the ballot until 2024. Senate Democrats believe that timeline still gives them enough time to avoid budget problems.

“It’s a remarkably high-class problem, isn’t it?” he said.