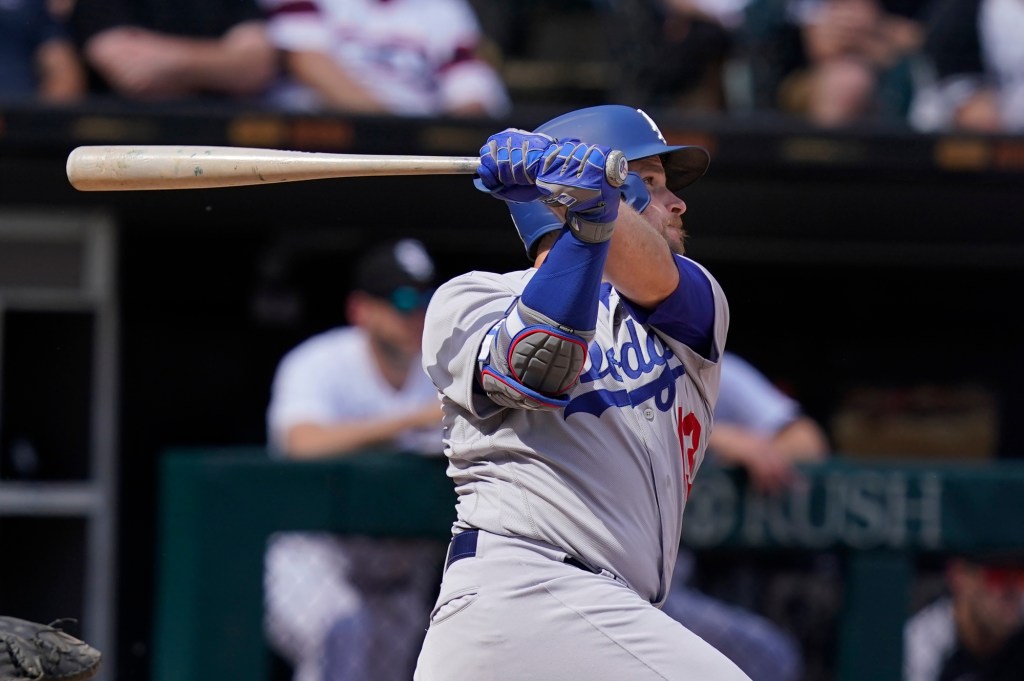 CHICAGO — One game might do more for Max Muncy’s psyche – er, elbow – than any number of rehab games in Triple-A could.

Muncy drove in five runs with a double and a home run as the Dodgers scored 10 times in the fifth and sixth innings, and they needed every bit of it to beat the Chicago White Sox, 11-9, Thursday afternoon.

Coming into the game, the Dodgers’ offense had slipped into neutral. While losing six of their previous nine games following that trip, they had hit just .228 as a team – even worse with runners in scoring position (.171) – and averaged 3½ runs per game.

For four innings, it looked like more of the same. The Dodgers managed just two hits and a walk against White Sox starter Dylan Cease and fell behind 4-0 when Tyler Anderson’s scoreless streak came to a crashing halt.

The White Sox ended it at 28 scoreless innings when Josh Harrison led off the third inning with a triple and scored on a ground out. Anderson couldn’t retire any of the four batters he faced in the fourth inning, giving up two walks, a single and a double before leaving the game with the bases loaded and no outs.

Brusdar Graterol replaced Anderson and promptly hit Adam Engel with his first pitch, forcing in a run. A sacrifice fly scored another before Graterol closed out the inning.

But things unraveled on Cease in the fifth inning with White Sox manager Tony La Russa leaving the 26-year-old right-hander in to face nine batters and throw 45 pitches thanks to an error that extended the inning and made all six runs unearned.

Cody Bellinger started it with an accidental single against the shift. Gavin Lux walked to put two runners on with one out. Cease got Austin Barnes to bounce a ground ball to third baseman Jake Burger – but Burger booted it for an error.

Mookie Betts struck out – what would have been the final out if Burger had made his play – and then the dam burst.

Freddie Freeman doubled in two runs. Trea Turner beat out an infield single to drive in another. Freshly back from his brief time in Oklahoma City, Muncy doubled into the left-center field gap to drive in two more and give the Dodgers the lead.

After Cease walked Will Smith, La Russa finally brought in a reliever, Matt Foster. That didn’t work well either. He walked Justin Turner then threw a wild pitch that brought in the sixth run of the inning.

La Russa’s sixth-inning move will not be added to his Hall of Fame plaque either.

Lux led off with an infield single (one of his four hits in the game), moved up on a ground out then scored on a two-out RBI single by Freeman (his third hit in the game after a 9-for-49 lull).

Freeman moved up on a wild pitch as lefty reliever Bennett Sousa worked to a 1-and-2 advantage against Trea Turner. La Russa had Sousa intentionally walk Turner despite the count and face Muncy instead.

The decision brought some angry catcalls from the crowd. Standing on second base, Freeman could even be seen turning to a White Sox infielder and asking, “With two strikes?”

Muncy made him pay, driving another ball the opposite way. This one cleared the left-field wall for a three-run home run. It was Muncy’s first game this season with multiple extra-base hits.

The Dodgers needed all of it. With six innings to cover after Anderson’s early departure, Phil Bickford gave up a solo home run in the fifth and Alex Vesia made a mess of the eighth, walking the first two batters he faced, giving up two infield singles and throwing the ball away on the second.

Two runs scored on that play but Vesia escaped further damage. Daniel Hudson gave up two more runs in the ninth and had the winning run at the plate before he closed it out.

More to come on this story.