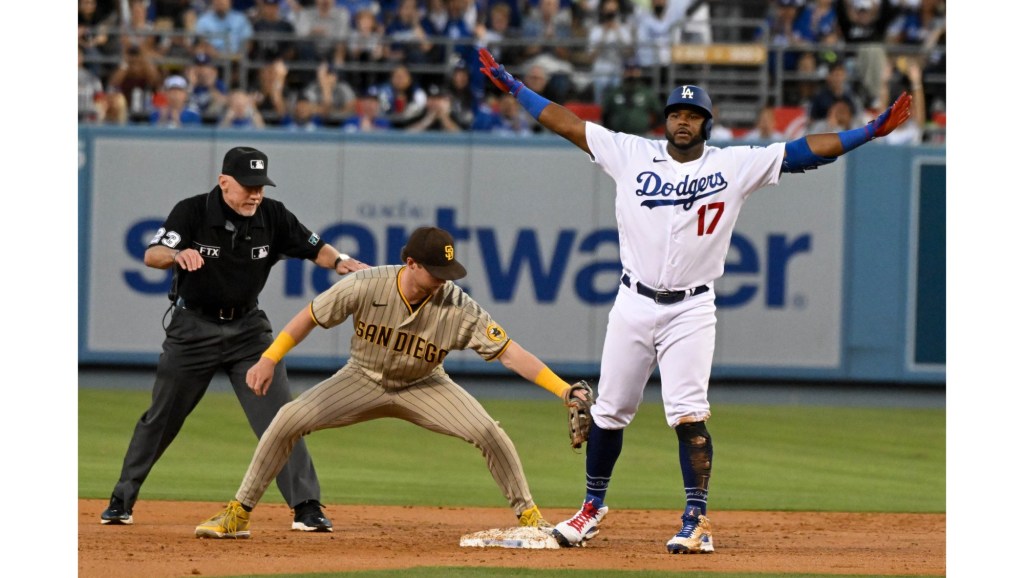 LOS ANGELES ― A night that began with a moving tribute to Vin Scully felt certain to end with a hotly contested duel between the two best teams in the National League West.

Instead, the San Diego Padres pulled up a chair and watched the Dodgers cruise to an 8-1 victory before an announced crowd of 52,714 at Dodger Stadium. The Dodgers’ final inning at the plate ended with a position player (Matthew Batten) pitching to a pitcher (Tyler Anderson).

Anderson struck out smiling on a 54-mph heater.

The Dodgers scored four runs in the first inning and four in the third, leaving the most dramatic moments Friday for the on-field celebration of Scully, who died Tuesday at age 94. The first pitch of the game was delayed eight minutes by the ceremony.

“I haven’t experienced anything like that since, probably, six years ago,” Dodgers outfielder Trayce Thompson said. “(Scully’s) last homestand, when Kevin Costner spoke and stuff, I remember that. It was pretty emotional. You’ve got to snap right back into it.”

That they did. Will Smith went 3 for 4, including a bases-loaded single to start the scoring in the first inning. Mookie Betts and Trea Turner each contributed two hits to the Dodgers’ 12-hit attack.

Tony Gonsolin (13-1) threw five scoreless innings en route to his first win at Dodger Stadium since July 7. The right-hander finished the first half undefeated, only to allow two home runs in the All-Star Game here and take the loss for the National League.

Gonsolin lost at home to the Nationals on July 25, then allowed three runs in a win at Colorado in his last start.

“I think some of the trust in the fastball is coming back, which is nice to see,” he said. “It’s great when our hitters hit like they do, give that support, so I’m able to attack guys.”

By the skin of his teeth, Gonsolin survived the first inning without allowing a run.

With one out, Juan Soto was greeted with resounding boos prior to his first Dodger Stadium at-bat as a Padre. He then smoked an 0-and-1 fastball 108.5 mph to center field for a single.

Gonsolin went to a full count against the next batter, Manny Machado, then struck him out with a well-placed fastball on the outside corner. Josh Bell shot a single down an unguarded third-base line, sending Soto to second. Jake Cronenworth hit Gonsolin’s 30th pitch of the inning sharply toward first base, where Freddie Freeman got his glove down in time to smother the ball and record the final out himself.

Then, as quickly as it announced itself, the Padres’ new-look offense went quiet.

Gonsolin walked Brandon Drury to begin the second inning, then fell behind Trent Grisham 3-and-0. As if he had replaced himself with a strike-throwing twin, Gonsolin used his next three pitches – all fastballs – to punch out Grisham. That began a streak in which Gonsolin retired 12 of the final 13 batters he faced.

“I think just falling behind in some counts, not landing some of the offspeed stuff for strikes kind of forced me into being fastball-heavy,” said Gonsolin, who threw the heater on 52 of his 98 pitches. “I thought it was pretty good today, and executed it when I needed to.”

David Price (1⅔ innings) and Reyes Moronta (1⅓ innings) did not allow a run in relief of Gonsolin. In the ninth inning, Phil Bickford issued a leadoff walk to Bell, who came around to score on a sacrifice fly.

The prizes of the Padres’ preposterous trade-deadline party – Soto, Bell and Drury – all reached base at least once. The rest of their lineup went 2 for 22 with one walk.

The Dodgers (73-33) lead the Padres (61-48) by 13½ games in the division. They stole all the thunder from a matchup of the final two teams bidding to acquire Soto. The Washington Nationals ultimately traded Soto and Bell to San Diego on Tuesday for five prospects and first baseman Luke Voit.

“I told (Soto and Bell) they look terrible in brown,” joked Turner, who played with Soto in Washington from 2018-21. “It’s good to see them on a team that’s competing and wanting to win a championship. I think they deserve it. Juan’s won a World Series, was a big part of our team in ’19, then JB hasn’t been there yet. Hopefully, he gets a chance to play in the postseason.

“I’m happy for those guys. I look forward to playing a lot of baseball against them.”