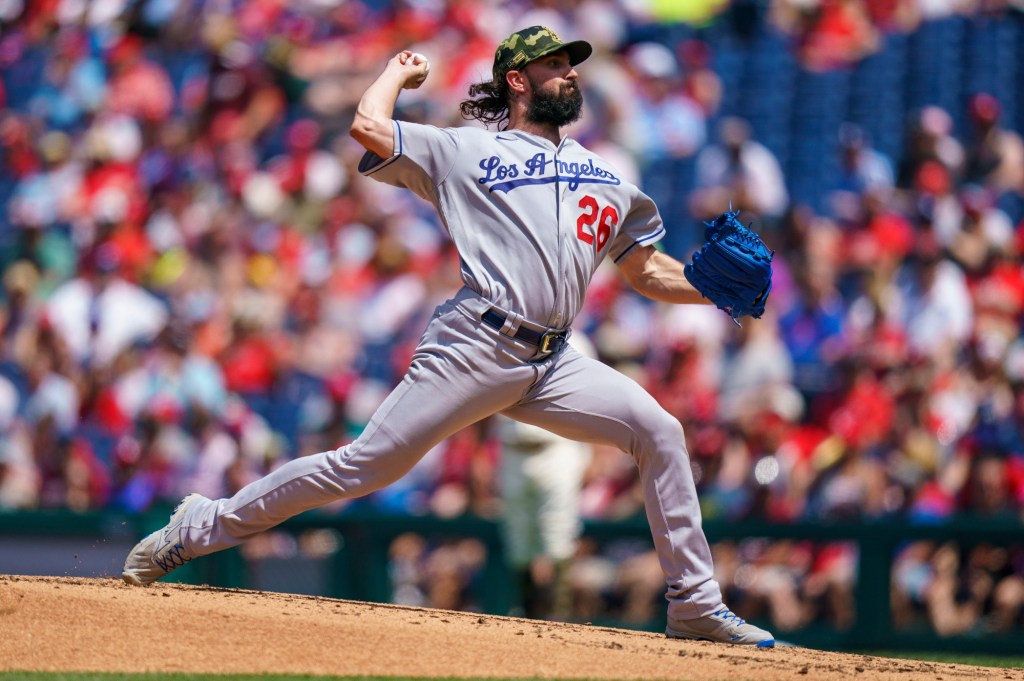 PHILADELPHIA – Maybe there’s something in the water. Or the cheesesteaks.

Having exploited the Philadelphia Phillies’ bullpen dysfunction repeatedly over the past 11 days (and seven meetings), the Dodgers had their own lapse. One out away from extending their winning streak in the ninth and 10th innings, the Dodgers lost 4-3 when Max Muncy fumbled what could have been the game-ending ground ball.

The loss snapped the Dodgers’ seven-game winning streak. Half of their past eight games have been decided by one run.

Tony Gonsolin did what he could to take some of the burden off a Dodgers’ bullpen that has thrown 64 innings over the past 17 games.

The right-hander retired 11 of the first 13 Phillies, allowing a single and a walk (but getting a double play). He retired the side on nine pitches in the fifth inning, the fourth time in the first five innings he needed 15 or fewer pitches to retire the side.

Garrett Stubbs hit a splitter left over the plate for a solo home run to lead off the sixth but Gonsolin struck out the next three batters, finishing his sixth inning with his 90th pitch.

Gonsolin got a season-high 15 swings-and-misses – 13 of them on his slider (eight) or splitter (five).

The Dodgers’ offense was restrained in its support of Gonsolin.

The homer was Betts’ 10th of the season, one behind National League leader CJ Cron, despite Betts hitting none until his 13th game of the season. Betts struck out three times in the game but he still qualifies as hot. Over his past 10 games, he is 15 for 42 (.357) with six doubles, five home runs and 13 runs scored.

Edwin Rios flexed his muscle an inning later, taking Eflin deep for the Dodgers’ second run. It was Rios’ fifth home run of the season in just 44 plate appearances. He has a home run in three of his past five starts.

The Dodgers have hit 13 home runs during their winning streak. But that was all the Dodgers’ lineup had in it Sunday. Eflin struck out 12 in his seven innings and Gonsolin handed a one-run lead to the bullpen.

It stayed that way into the ninth. With closer Craig Kimbrel having pitched in the previous two games, the Dodgers tried to ride Yency Almonte for the final five outs.

He got a big double play to escape danger in the eighth and retired the first two batters in the ninth before Jean Segura singled in the tying run.

Evan Phillips came on for the 10th and was in trouble when Garrett Stubbs led off with an infield single, advancing the free runner to third base with no outs. But that runner, Realmuto, was fooled when Justin Turner caught Freddie Freeman’s high throw and acted as if it had gotten past him. Turner then tagged Realmuto out.

Phillips struck out Johan Camargo but gave up a single to Roman Quinn, putting runners at second and third. Alec Bohm hit an easy ground ball to Muncy — who booted it as two runs scored.