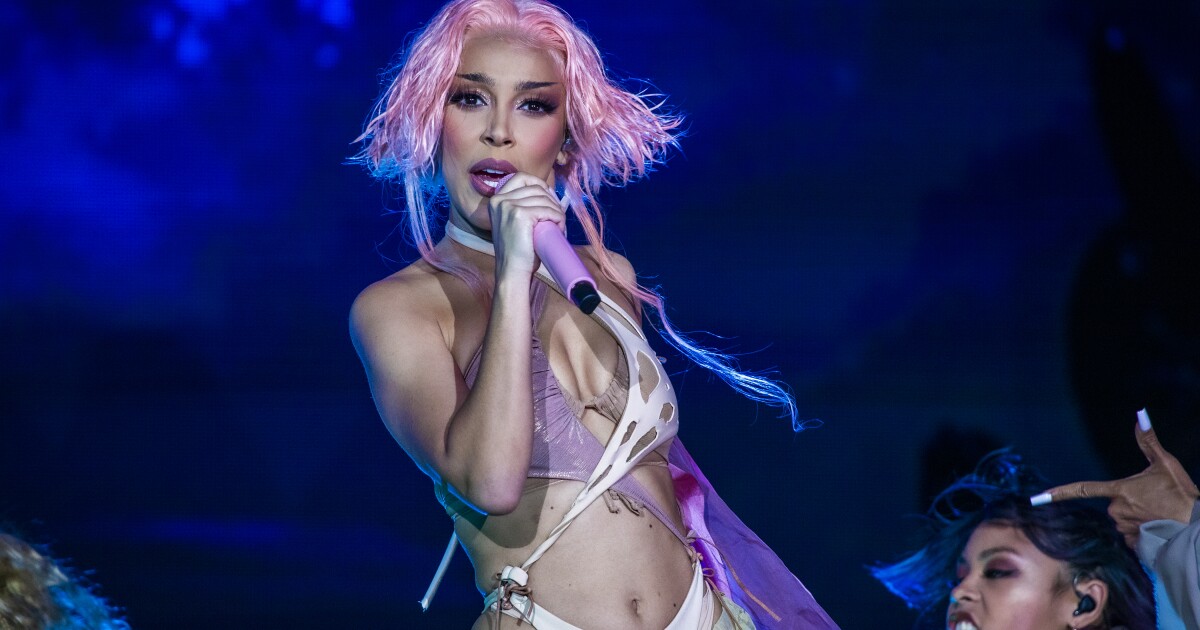 After getting into arguments on social media with fans from Paraguay, Doja Cat announced Thursday on Twitter, “This s— ain’t for me so I’m out. Y’all take care.”

Doja made a stop Tuesday in Asunción, Paraguay, for a show on the first day of the two-day Asuncionico 2022 festival. She was set to perform alongside artists such as the Foo Fighters, Machine Gun Kelly and others.

However, severe weather conditions including flooding and thunderstorms resulted in the cancellation of the festival’s first day.

On Thursday, Doja posted a tweet about Brazil, which drew a reply from a fan, @SofiZapattini, who commented, “Not a single photo being in Paraguay, not a single tweet, not a single instagram story!!!! You made us empty!!”

Doja replied, “I’m sorry,” only to have another person, @metamorsophie, post a photo of the singer labeled “PUBLIC ENEMY #1″ and comment, “it’s too late to apologize.” Doja replied, “I’m not sorry,” ultimately sparking the widespread backlash.

In other tweets she sent out Thursday, some of which have since been deleted, Doja wrote, “I can’t wait to f— disappear and I don’t need you to believe in me anymore. Everything is dead to me, music is dead, and i’m a f— fool for ever thinking I was made for this this is a f— nightmare unfollow me.”

Doja changed her Twitter bio name to “i quit,” then updated it again to “i quit still.”

A representative for the singer didn’t reply Friday to a request for comment.

Doja’s fans continued to express their disappointment and anger with the singer. They criticized her for not paying attention to fans who stood outside her hotel in in the days before the event and for allegedly lacking empathy for fans who had waited in the inclement weather to see her perform.

A fan who who goes by @elatedleigh tweeted Thursday afternoon, “WE ONLY WANTED A F— POST ASKING IF WE’RE OKAY WE PUT OUR LIVES IN RISK thanks god we’re all fine but you don’t even seem to care.”

“Those ‘fans’ entitled as hell you don’t owe them anything,” @kirawontmiss tweeted Thursday night.

In response to the cancellation and the lousy weather, other headliners such as Machine Gun Kelly and Miley Cyrus took reached out to their fans via social media.

MGK even wound up performing a set Tuesday night in front of his hotel, where crowds of people showed up to show their support.

Cyrus was set to headline the second day of the festival, but her flight to Paraguay was forced to make an emergency landing after her plane was “caught in a major unexpected storm and struck by lightning,” the singer wrote Tuesday on Instagram.

Everyone on board was safe. But in response to missing her fans in Paraguay, Cyrus posted a video of herself in a bubble bath as she sang and dedicated her 2010 hit “Stay” to them.

Doja Cat was still set to perform Friday at Lollapalooza Brasil 2022, her second show in Brazil in two nights.