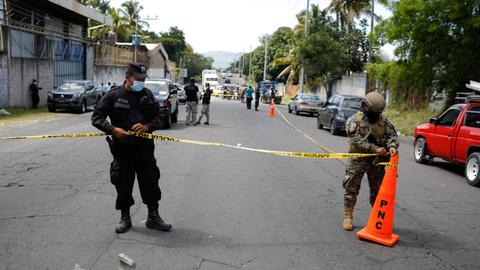 President Nayib Bukele has asked his country’s congress to approve a state of emergency to combat a wave of gang-related killings over the weekend.

El Salvadoran President Nayib Bukele has urged lawmakers to declare a state of emergency after authorities arrested dozens of gang members over a recent wave of bloodshed.

Gang violence has soared in El Salvador in recent days, with police reporting that 62 people were killed on Saturday alone.

Hours earlier, police and the military arrested several leaders of the Mara Salvatrucha (MS-13) gang over the spate of killings.

“We will not back down in this war against gangs, we will not rest until the criminals responsible for these acts are captured and brought to justice,” the country’s National Civil Police posted on Twitter.

In response to killings, Bukele asked the legislature – controlled by his ruling party – to meet to declare a state of emergency, under which certain freedoms are curtailed.

The Salvadoran constitution says that a state of emergency can be put into place “in cases of war, invasion of territory, rebellion, sedition, catastrophe, epidemic or other general calamity, or serious disturbances of public order.”

“Since yesterday, we have had a new spike in homicides, something that we had worked so hard to reduce,” Bukele said in a statement posted on Twitter by Congress president Ernesto Castro.

“While we fight criminals in the streets, we must try to figure out what is happening and who is financing this.”

Castro said the country “must let the agents and soldiers do their job and must defend them from the accusations of those who protect the gang members.”

Bukele asked the prosecutor’s office “to be effective with all the cases” of gang members that it processes, warning he would keep an eye on “judges who favor criminals.”

Last November, El Salvador suffered another spike in homicides that claimed the lives of some 45 people in three days.

The Mara Salvatrucha and Barrio-18 gangs, among others, have about 70,000 members in El Salvador, according to authorities, and operate through homicides, extortion and drug trafficking.