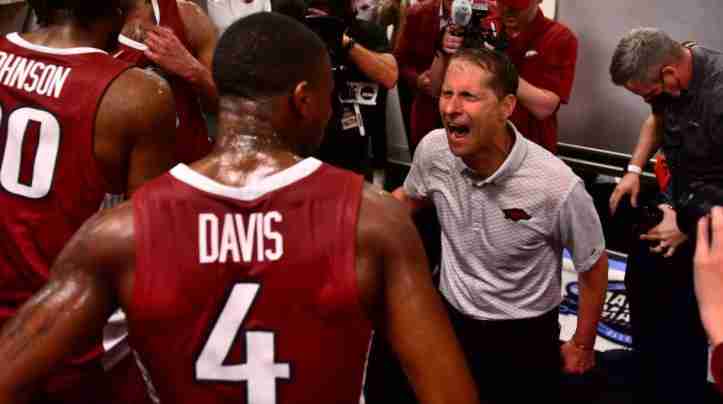 SAN FRANCISCO – It took an effort that had not ever happened in college basketball to get it done but the Arkansas Razorbacks are headed back to the Elite 8 thanks to a 74-68 win over top-ranked Gonzaga on Thursday afternoon inside Chase Center.

Arkansas became the first team to ever beat an AP #1 team in the regular season (vs Auburn on Feb 8) and defeat the AP #!1 (overall #1 seed Gonzaga) in the NCAA Tournament (ESPN Stats).

Also, no men’s college basketball team had beaten two different No. 1 teams from the AP poll in the same season since 1992-93 when Georgia Tech beat Duke and North Carolina in the same season, until the Razorbacks added No. 1 Gonzaga to the win column alongside a victory over No. 1 Auburn from the regular season. Neither victory came easy, but Thursday’s put the Hogs in the team’s second straight Elite 8, something that had not happened since back-to-back trips to the Final at the end of the 1994 and 1995 seasons.

Arkansas’ defensive effort was the difference against the Bulldogs, holding the nation’s best scoring offense (87.8 ppg) and best shooting offense (52.6%) to just 68 points on 37.5% shooting. After enduring a four-minute scoring drought midway through the first half, the Razorbacks responded with a 9-0 run to take the lead and finished the half on a 13-2 run to take a 32-29 lead into the locker rooms. The late half run was fueled by forcing four Gonzaga turnovers and holding the Zags to just 1-of-7 from the field over the final 6:29.

Gonzaga quickly he drew even to open the second half but again the Razorbacks answered with a run again fueled by defense. Arkansas held the Bulldogs without a field goal for nearly five minutes to help build an eight-point lead.

Nursing a five-point lead with just eight seconds left, Au’Diese Toney’s block of a Drew Timme shot was the final momentum swing the Hogs needed. Toney put an exclamation point on the victory with a dunk with one second remaining to keep the Hogs dancing.

JD Notae led the Razorbacks with 21 points, six assists and three steals. Jaylin Williams scored 15 points and grabbed 12 rebounds to record his 15th double-double of the season while becoming Arkansas’ all-time leader in rebounds in a single season. Trey Wade’s 15 points and seven rebounds were huge in the win and marked just the fourth time this season he has scored in double digits.

Timme led Gonzaga with 25 points. Chet Holmgren scored 11 points and had 14 rebounds before fouling out.

Arkansas will face #2 seed Duke in the Elite 8. Tipoff is set for 7:49 pm (CT) and the game will be televised on TBS.