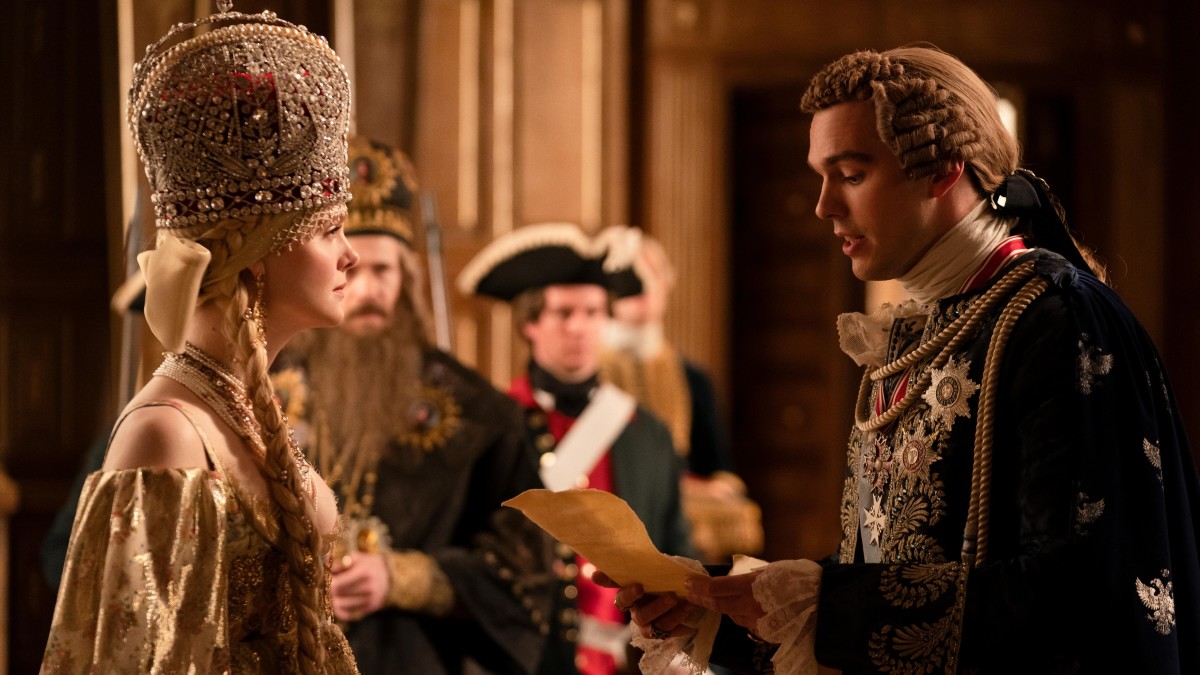 Warning: Spoilers for episodes one through three of ‘The Great’ season two, below.

“You liked what I wore at the coronation?,” asks Catherine (Elle Fanning) to an admiring group of Russian imperial court tweens in season two of Hulu’s “The Great.” After seeing their newly-crowned Empress’ resplendent ceremony ensemble, the young ladies now feel inspired and invigorated to pursue an education previously denied to them.

In creator Tony McNamara’s wickedly irreverent and modern interpretation of the early reign of Russia’s longest ruling female monarch, Catherine the Great, this moment teaches a ripped-from-the-history-books lesson: Fashion is a powerful a tool to help inspire change.

Born in Prussia as German royalty, the real Catherine the Great established the Russian imperial style of dress to distinguish from the French and Western European fashions previously favored by the court. Wielding fashion as a soft power, the Empress illustrated her national pride and connected with the Russian people by bringing traditional Russian clothing, like the rural folk pinafore — sarafan — back in style.

In “The Great,” Catherine uses her coronation gown to directly reach her new subjects, change her German “mail-order bride” narrative (per husband Peter, played by Nicholas Hoult) and send a message of modernity and change.

“Fuck. We actually banned most of those fabrics — I thought you were taking Russia into the future, not grandmother’s house,” snarks Peter, now banished to the other wing of the palace, as he presents her crown.

Season two costume designer Sharon Long began by studying Catherine the Great’s historically-documented gown, traditional Russian dress and gold textiles for a period-correct foundation. “It was just a very slow process of lots of research and a lot of looking at how you can subvert that sarafan and give it a contemporary feeling because she has to appeal to the Russian people,” she says.

“That’s what she’s doing as Catherine the Great, in a modern sense,” she says. “We all had to gasp as Elle walked onto the set. We wanted the feeling that it was a jaw-dropping costume.” Huzzah!

Officially ruling Russia and enacting change isn’t the only new stage for Catherine in the new season: She’s also pregnant with the royal heir. So, her costumes now involve late 1700s-ish maternity-wear.

“[The pregnancy] already took her in a slightly different direction and gave us some gravitas,” says Long. “She’s still a young empress and she’s got a certain amount of power, but she’s practical and appears as an idealist, and should look slightly different from the rest of the court.”

Still, “it’s quite difficult with the the 18th century to do pregnancy”: Long points out that maternity-wear of sorts did exist during that period, but didn’t quite translate onto camera or Fanning, so she pivoted to inspiration from contemporary designers known for volume and exuberantly-edgier takes on vintage silhouettes, like Simone Rocha and Cecilie Bahnsen, plus ’50s-era Pierre Balmain.

“We use really beautiful silks and kept it really light and frothy,” she says.

Sadly for Fanning’s comfort level, pregnant women in the 18th century continued to wear corsets, only special ones.

In episode three, Catherine, invigorated by the thought of enacting her progressive policies (and by some lavender powder she snorts), pulls an all-nighter planning session with her team. She’s so enthusiastic, she hasn’t changed out of her at-home clothes, which, to 2021 eyes, look like a chic fuchsia robe, an Instagram-ready crop top and low-waist trousers. The former is based on the banyan, an 18th century European dressing gown influenced by the Japanese Kimono. In real life, Catherine the Great did luxuriate in her royal rooms swathed in her banyans, while writing letters to her good friend Voltaire and other French philosophers.

“She spent quite a lot of time in kind of relaxed-wear, apparently,” says Long. “We really wanted to show the corset because it’s a maternity corset, with lacing at the sides. People did carry on wearing them.”

The ensembles also emphasize Catherine’s excitement for her prolific plans: “She’s surprising and grabbing people and demanding their attention, and she’s wearing hardly any clothes. It just adds to the humor of the situation and the madness, really.”

With Catherine now “improving Russia,” Peter can focus on “improving himself,” as he earnestly says with delightfully zero self-awareness. Even in the opening scenes, as his wife’s coup rages on in the palace, he’s throwing back booze and gourmet canapés with his co-dependent court bros.

“He’s still flamboyant, and hedonistic, and his clothing is irreverent,” says Long.

Playing violin (but quite badly), Peter attempts to wait out the revolution in style: a long furry vest, covered in subtle leopard print, his signature layered pearls and metallic leather-like denim trousers (above), inspired by a vintage photo of British musician Yusuf Islam (then Cat Stevens).

“There’s a brilliant ’70s photograph of him in what looks like metallic gold jeans, which we’ve got on Nick, and a fur-collared coat,” Long says. “So we mixed the ’70s references of those rock star, furry-collared coats with a couple of images of original coats at the time. Nick just loved all the fur.” (Long points out it was all faux.)

In addition to literally reflecting Peter’s tendencies to be a “fucking animal” (as Catherine says) through a range of feline-themed prints, Long also inventively used artwork to communicate the unemployed monarch’s other interests and hobbies.

In episode one, he stays warm in a faux fur-trimmed tapestry coat (above) with sections of a hunting painting, featuring “dead pheasants” by 17th century Dutch artist Jan Weenix digitally printed onto linen. “This coat that has basically dead animals on it,” says Long. (Tracks.) Later in the season, Peter wears a velvet vest emblazoned with of a panel of “Still Life with Ham, Lobster and Fruit,” by Jan Davidsz de Heem, circa 1653. “Food, and his love of it, is very important to his character,” says Long. Touché (or “toosh,” as Peter used to say.)

Peter’s 18th century rock star aesthetic evolves in a very contemporary manner, bringing Harry Styles to mind. “We’ve got a few more frills. We’ve got some transparency,” says Long. “Peter is really comfortable about who he is. He wears his heart on his sleeve, really.”

As Catherine begins her history-making reign in imperial Russia, and navigates co-parenting with an exiled-at-home Peter, her wardrobe continues on her journey with her.

“As the episodes develop, she wears slightly larger patterns,” says Long. “As her [pregnancy develops], she looks bolder — and stronger.”

Season two of ‘The Great’ streams on Hulu on Friday, Nov. 19.